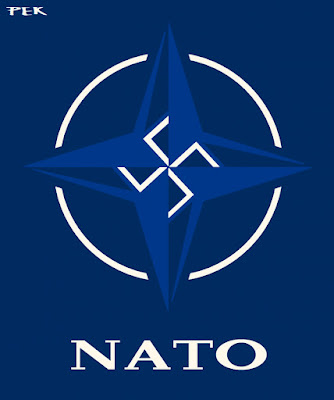 As I watch the U.S. imperialists manufacture a crisis in Ukraine, putting forth fabricated accounts of Russian provocations so that further military buildup throughout the region can be justified, I think of what Albert Camus said about humanity’s capacity for evil in the modern era.

As he observed in his 1946 lecture The Crisis of Man, the conditions of capitalism, imperialism, and colonialism have produced a paradigm of amorality. One where what’s “right” is considered synonymous with what advances the interests of the conqueror, since the conquerer and his subordinate authorities are presumed as righteous simply because they’ve won. In this mentality, there’s nothing to believe in, just a nihilistic philosophical void that permits all atrocities imaginable—because as long as those atrocities are committed by history’s victors, they’re not horrors to be condemned but phenomena to be passively observed. Camus assesses that the logical conclusion of this is a worldview that can easily accept, and even praise, someone like Hitler:

If one believes in nothing, if nothing makes sense and one is unable to affirm any value, then everything is permitted and nothing is important. Hence there is neither good nor evil, and Hitler was neither wrong nor right. One could lead millions of innocents to the crematorium as easily as one may devote oneself to curing leprosy; one can tear a man’s ear with one hand and soothe him with the other; one can clean a house in front of men who had just been tortured; one can honor the dead or throw them in the garbage. It is all the same. And since we thought that nothing made sense, we had to conclude that the man who succeeds is in the right. And this is so true that even today plenty of intelligent skeptics will tell you that if Hitler had by chance won the war, history would have paid him homage and consecrated the hideous pedestal in which he perched. And there can be no doubt that history, as we conceive of it today, would have consecrated Hitler and justified terror and murder just as we all consecrate murder and terror when we have the temerity to think that everything is meaningless.

Aren’t current events proving this right? Since the Obama administration covertly maneuvered to install an ultra-nationalist regime in Ukraine eight years ago to counter Russia, our institutions have been engaged in a virtual blackout on the rampant human rights abuses which this regime has committed. Politicians, the media, and “human rights” organizations haven’t drawn any attention to the Ukrainian government’s ethnic cleansing and anti-democratic actions, despite claiming to care about human rights and democracy when it comes to Washington’s adversaries.

When the Ukrainian National Guard has committed war crimes, the Ukrainian military has regularly massacred hundreds of civilians as part of its warfare strategy, Ukraine has tortured dissidents, and Ukrainian forces have shot at refugees, the world’s supposed voices of moral authority have been silent. Even when Ukraine has fostered neo-Nazism, to the point of allowing fascists to march in praise of Nazi collaborators, the cold warriors have ignored it under the rationale that the explicit Nazis don’t represent the government itself. In spite of the ample evidence that the military is entangled with the fascist paramilitaries and their ideology, and the on-the-ground realities of what’s been perpetrated against marginalized groups.

The consequences of this negligence have been pogroms and other forms of terror, directed at Jews, Romas, the LGBT community, those who engage in speech that’s perceived as challenging ultra-nationalism, and the country’s one-third of Russian speakers. As corruption from intensive neoliberal policies has devastated the economy, the breakdown in state functionings has created a power vacuum, which the fascist militias have filled. For the victims of the Nazi terror, it hasn’t mattered that Ukraine’s president is Jewish, or that NATO claims to be backing Ukraine in the name of “democracy.” The terror has come all the same. This is precisely what the prevailing forces within Euromaidan, the ones that Washington backed and put into power, have wanted from the start. After the coup, the new Kiev regime expressed intentions to forcibly relocate the Russian speakers throughout the Donbas region, which would have been a blatant violation of international war crimes laws.

Following the 2014 statement from Ukraine’s Defense Minister that these groups ought to be transferred into “filtration” camps, Voltaire Network’s Andrew Korybko observed about Washington’s reaction:

This choice of words not only wasn’t condemned by Kiev’s American patrons, but was actually defended by State Department spokesperson Jen Psaki, who strangely said that Yatsenyuk “has consistently been in support of a peaceful resolution.” Raising concerns even higher that a full-fledged cleansing is being planned, Ukraine’s land agency said that it will be giving “free land” from the east to the military, Interior Ministry, and Special Services troops battling the federalists. With Ukraine on the verge of large-scale ethnic and cultural cleansing, it is little wonder at whose expense this Lebenstraum-like “free land” will be given….Perhaps because Yatsenyuk and others in his administration believe the protesters in the east to be “subhuman”, they do not feel that “human rights” apply to them. Accordingly, these “sub-humans” won’t have the right to their former property as well (due to the forcible resettlement), so it is likely that their homes and businesses will be the “free land” that Kiev has promised to its militant henchmen deployed in the east.

Such is the punishment that Ukraine’s ruling faction seeks, and has been carrying out within the fullest extent of its territorial access, against the ethnic Russians who seek to liberate their communities from a genocidal regime. If Crimeans hadn’t voted to join Russia, they would have been subjected to the same horrors that the regime has been visiting upon their relatives elsewhere.

And the cultural hegemony within the U.S. has no problem whatsoever with the regime’s Hiterian solution to what can be called the “Russian question.” Top U.S. neocons met with the Ukrainian fascists after they came to power. The Biden administration has refused to condemn Kiev for facilitating official celebrations of Ukrainian Holocaust perpetrators, who the regime considers the country’s heroic “founding fathers” and criminalizes any denunciations of. The U.S. media gives praise to the Ukrainian armed forces despite these forces blatantly displaying Euromaidan’s variation of the Nazi insignia, and prominent U.S. intellectuals dehumanize the ethnic Russians by casting them as bad actors simply for evacuating their women and children.

How many times can the U.S. empire prove Camus right? The foundations for this revival of state power for Nazis, and normalization of Nazism within the liberal sphere, have been getting laid down since the end of the Third Reich. NATO was founded in collaboration with a number of Nazi war criminals, who were appointed by the imperialists to continue their war against Russia from a new, more advantageous position: one of unity with all the imperialist powers that had opposed Germany. The U.S. shielded Nazi scientists from justice by using them for the CIA’s Cold War operations, and Washington would later collaborate with the members of a Chilean Nazi colony to recruit torturers for the CIA-installed Pinochet dictatorship.

All throughout this time, and even prior to World War II, the U.S. media has been promoting the lie from Goebbels that Stalin engineered a famine in Ukraine—the atrocity propaganda story that the Kiev regime is now using to justify its banning of communist organizing, persecution of Russian speakers, and characterization of Russia as an aggressor which has historically victimized Ukrainians. The ultra-nationalists have turned reality on its head to portray themselves as the victims, when they’re the perpetrators.

On every level, at every step of the way, the imperialists have worked to ensure that Hitler never died. And the most important part of this has been the cultivation of the mentality Camus described. The mentality where evil isn’t recognized for being evil, but simply gets rationalized as the natural aspects of how history progresses. When you believe conflict is the unavoidable order of things, and one side always has to subdue the other, you can come to approve of endless atrocities as long as they help your side. Human beings are no longer seen as human beings, but as resources that can be casually sacrificed and abused. Torture, murder, persecution, forced relocation, and deprivation aren’t worth raising issue with, since morality is irrelevant. All that’s relevant is the war. This is the crisis humanity faces, the crisis that Camus said is

…about replacing real men with political men. Individual passion is no longer possible, only collective, that is to say, abstract passions. Whether we like it or not, we cannot avoid politics. It no longer matters that we respect or prevent a mother’s suffering. What counts is ensuring the triumph of a doctrine. Human suffering is no longer considered a scandal, it is merely one variable in a reckoning whose terrible sums has not yet been calculated. It is clear that these different symptoms can be summed up by something that might be described as the cult of efficiency and abstraction. This is why Europeans today know only solitude and silence. They can no longer communicate with others through shared values. And since they are no longer protected by mutual respects based on those values, their only alternatives is to become victims or executioners.

This is how the U.S. empire’s propagandists want you to think. They promote a view of the world that excuses the worst depravities in the interests of advancing the doctrine of Washington’s hegemony, which the imperialists and their proxy regime have sold to Ukrainians as a route towards Lebensraum. And given the origins of the United States itself, we can see why it’s made the theft of land into its core basis for driving Ukraine towards war. The U.S. settlers murdered nine out of ten Natives throughout the land, using warfare means ranging from the sabotage of crops, to the massacring of children, to the deliberate spreading of disease, to the forced transfer of entire indigenous nations. And because they won, the country they’ve built on the stolen land is not condemned, but celebrated.

U.S. settlerism, with its land theft and genocide under the rationale that these things are crucial for building a superior nation, is where Nazism originated. Now U.S. settlerism is taking its doctrine into Ukraine, to the effect that our human crisis may soon produce a repeat of the last time it plunged the world into war.

One thought on “ NATO’s Nazis in Ukraine, anti-Russian war propaganda, & our human crisis”