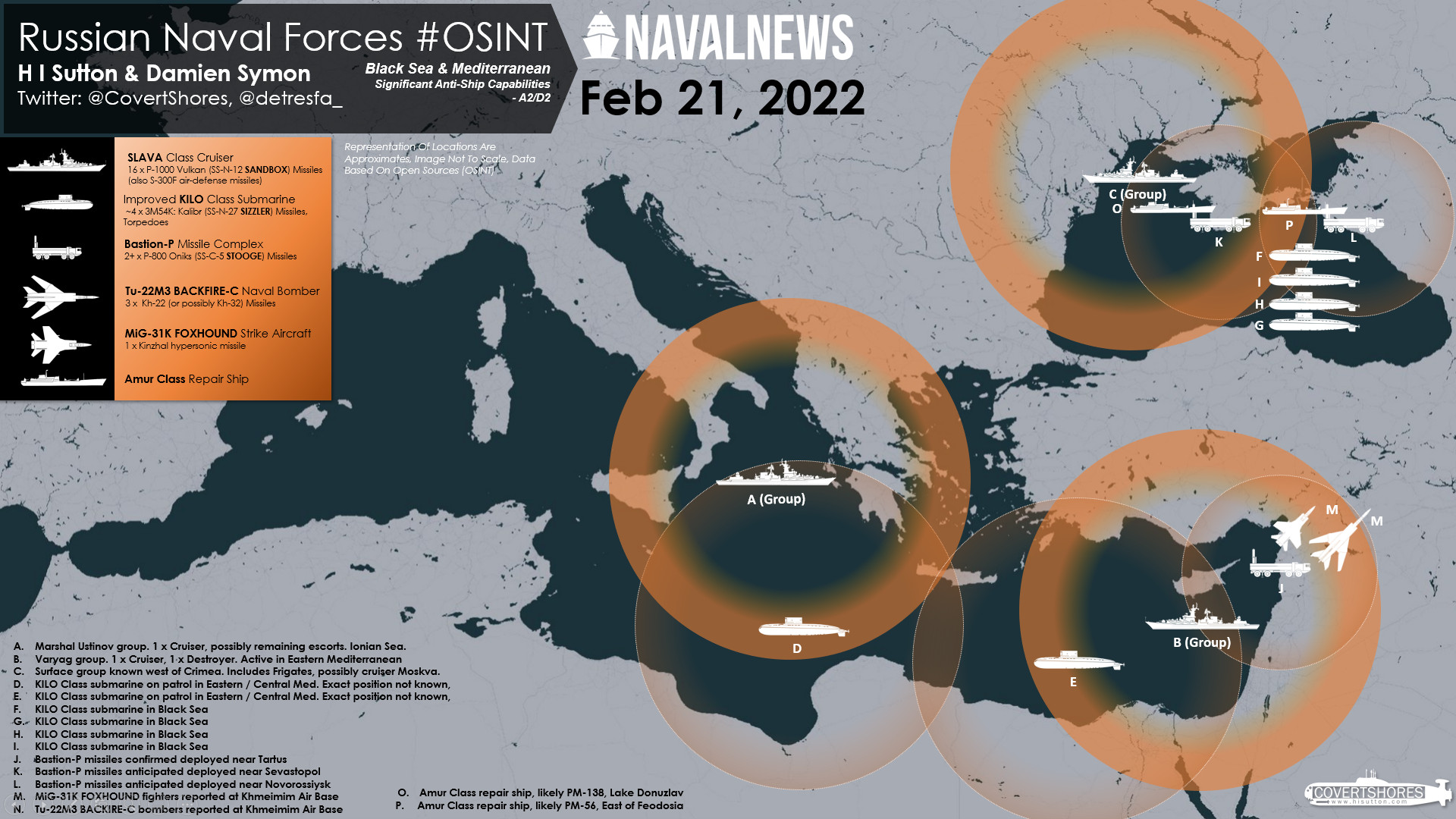 The naval arm of Russia’s military build-up around Ukraine is in place. Landing ships, major warships, submarines and aircraft effectively dominate the Black Sea. And the visible preparations extend into the Mediterrean. It appears overwhelming.

The Russian Navy’s build-up in the Black Sea now appears largely complete. More warships may arrive in the next few days, but the core is already in place. Russia has deployed key naval assets, thousands of miles from their bases in the Arctic and Pacific, to positions near Ukraine.

Outside the Black Sea, in the Mediterrean, more naval forces are ready. These can be viewed as an outer layer of defense, primarily against NATO involvement.

Massive build-up in the Black Sea

Some units, including missile corvettes and landing ships, have recently moved to the Sea of Azov. This restricted, shallow, body of water places them adjacent to the city of Mariupol in the Donetsk region.

However this movement may be seen as a diversion, or minor force. The majority of Russia’s landing ships and other assets remain in the main part of the Black Sea. This threatens Ukraine’s southern coast including the strategic city of Odessa.

There are too few landing ships to suggest that amphibious landings would be the primary means of invasion. But they could complement other thrusts. Some landing ships have been observed loading tanks. And they could be used to provide strategic reinforcements as a land-invasion progresses. Or to resupply any coastal enclaves which develop.

The landing ships and some warships have briefly made headlines. But a stronger indicator of war preparations may be the fleet auxiliaries. These are easily overlooked by observers but their locations may be significant. Like setting up field hospitals on land, moving fleet axillaries may tell a different story to the official narrative.

On February 17 Russia appeared to pre-position two repair ships, one either side of Crimea. The Project 304 Amur Class repair and depot ships perform urgent repairs on the high seas. In essence, combat repairs. This is not a capability which is ordinarily needed during drills.

One ship, PM-138, was observed in Lake Donuzlav on the West coast. This lake has immediate access to the sea, and is a safe harbor to perform emergency battle repairs in. The other, PM-56, was similarly positioned near Feodosia on the east side of Crimea. PM-56 has since moved further east, possibly in support of units in the Sea of Azov. But we still consider its activity as indicative of pre-staging.

Other Russian warships and auxiliaries are positioned west of Crimea, near the Ukrainian coast. These are likely to include the Admiral Grigorovich Class frigate Admiral Essen and other combatants. It also includes the Yug Class survey ship Donuzlav which appears to be being used for intelligence gathering.

The largest surface combatant currently in the Black Sea is the Slava Class cruiser Moskva. This is an impressive warship, built during the Cold War, and are still formidable today. The Slavas are armed with powerful P-1000 Vulkan long-ranged supersonic anti-ship missiles.

The Vulkan missiles are the most visible weapon, carried in ginormous tubes along each side of the ship. But there are few targets for these in the Black Sea. Hidden beneath the decks are S-300F air-defense missiles.

The ship’s S-300F missiles will be able to penetrate Ukrainian airspace in areas not covered from land. Together with land-based S-400 missile they provide layers of defense to other warships performing combat duties.

The surface combatants are complemented by 4 Improved Kilo Class submarines. These relatively new boats have previously been active off Syria, where they launched cruise missiles. Each submarine can only carry a few Kalibr cruise missiles, but it offers a first-night strategic strike capability. Some of these boats have been observed loading cruise missiles in recent weeks.

Immediately beyond the Black Sea, in the Mediterrean, Russia has amassed more warships, submarines and aircraft. These forces have a more anti-ship focus, and are tying up significant NATO forces. Importantly they threaten NATO Aircraft Carriers in the scenario of limited air intervention.

The eastern Med is prowled by two more Slava class cruisers, with their escorts. For a time it had looked like these might also move to the Black Sea but that no longer appears to be the case.

There are also two more Improved Kilo Class submarines and a Bastion-P battery. This is armed with the formidable P-800 Oniks supersonic anti-ship missile. The Bastion-P system has recently been observed at a Russian base in Tartus on the Syrian coast.

Tu-22M3 Backfire-C and MiG-31K Foxhound aircraft have been deployed to Syria. These carry the Kh-22 supersonic anti-ship missile and Kinzhal hypersonic missile respectively. Although seen as untested, Russia maintains that the Kinzhal can hit maritime targets. By implication, aircraft carriers. Flanker fighters and Il-38 May maritime patrol aircraft are also present.

The naval aspect of the build up was previously described as drills. That seems almost forgotten now. And anyway the build-up has always looked like invasion preparations to many observers. If it was ever only drills, then it was designed to look like an invasion.

These things take a long time prepare. Maybe because of this people can become desensitized to it. Social Media and the 24 hour news cycle quickly moves on or seeks out some new angle. Yet the methodical preparations continue in plain sight. Invasion appears ever more certain.