The information war about the current U.S.-Russia standoff continues. That is why the New York Times is again pushing fake Russian invasion claims:

Russia faced mounting pressure and economic sanctions over the Ukraine crisis on Wednesday as the United States and allies coordinated punishments and denounced the beginning of an “invasion of Ukraine.”

Russian forces started rolling into their territory, according to NATO, European Union and White House officials. It was the first major deployment of Russian troops across the internationally recognized border since the current crisis began.

No Russian forces have recently been seen in Donbas or have been noticed rolling in. Moreover the Ukraine has made no claims that an invasion is happening.

The alleged invasion is again a claim without any evidence. It is part of the information war the U.S. is waging against Russia. All the anonymous intelligence-lacking officials who make such claims are simply lying. They have no sources or evidence to support such claims.

Just ask how many of them have predicted that Russia would officially recognize the Donbas republics? There is not one I am aware of.

Information wars are always a component of military conflicts, potential and actual. Usually, security services play a large role in orchestrating them. But these propaganda wars are dangerous because they tend to fly out of control and demonising an opponent hinders negotiations. Political leaders, for their part, tend to believe an unhealthy amount of their own propaganda and often act as if it was all true.

The last part is the real danger and it is happening right now. Biden, Blinken and others have for months falsely predicted a ‘Russian invasion’ and threatened to issue sanctions if it would come.

There is currently no ‘Russian invasion’ of Ukrainian or Donbas republics territory but the sanctioning has proceeded anyway without any further reasoning.

In a press conference yesterday the Russian president Vladimir Putin explicitly said that no Russian troops were yet to go in:

Regarding the use of the Armed Forces abroad. Well, of course. By all means. We signed treaties yesterday, and these treaties with the Donetsk People’s Republic and the Lugansk People’s Republic contain relevant clauses that say that we will provide these republics with appropriate assistance, including military. Since there is an ongoing conflict there, we make it clear by this decision that, if need be, we plan to fulfill our obligations.

Vladimir Putin: First, I did not say our troops would enter right away, after our meeting here. That is first. Second, it is absolutely impossible to predict the detailed path of possible actions. It depends on the concrete situation that is unfolding on the ground, as they say.

Russia is not interested in going to war. It wants do avoid an attack of Ukrainian forces on the Donbas republics. That is why it gave the security guarantees to them. It hopes that this will be sufficient to deter an Ukrainian attack.

This is what Russia wants to stop: 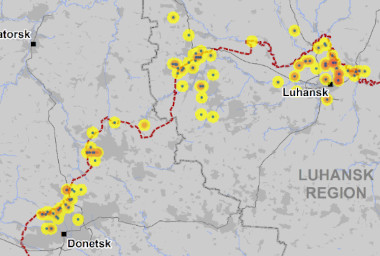 The cutout above is from a map by the OSCE monitoring mission to Ukraine and depicts the number of explosion the OSCE observers registered on Monday, February 21 2022. The majority of the explosions are again by far on the Donbas republics side and have, after a lull on Sunday, again increased.

This imbalance has been the case for a long time. A UN report about civilian casualties in Ukraine (h/t Aaron Maté) shows that in recent years more than 80% of the civilians killed in the conflict were on the Donbas side.

The artillery impacts show that the Ukrainian military is currently preparing the ground for an attack towards Donetzk and Luhansk. It has also brought up air defense systems which it will need to cover the attack.

If the Ukrainian military stops its bombardment and retreats from the border there is no need for any Russian soldier to roll into Ukraine.

There are claims that Russia will invade anyway because it has recognized the DNR and LNR republics within their constitutional borders. These are the original administrative regions borders and exceed the currently held grounds. However Putin says that this should be negotiated:

With regard to the borders within which we will recognise these republics, we did recognise them, which means we recognised their foundational documents, including the Constitution, and the Constitution stipulates their borders within the Donetsk and Lugansk regions at the time when they were part of Ukraine. But we expect, and I want to emphasise this, that all disputes will be resolved during talks between the current Kiev authorities and the leaders of these republics. Unfortunately, at this point in time, we realise that it is impossible to do so, since hostilities are still ongoing and, moreover, they are showing signs of escalating. But I hope this is how it will turn out in the future.

Putin has also shown a clear way out of the conflict:

The situation around Ukraine could be resolved with demilitarization of the republic and its rejection of accession to NATO, Russian President Vladimir Putin said, answering reporters’ questions in the wake of the talks with his Azerbaijani counterpart Ilham Aliyev.

The head of state underscored that Russia will provide military aid to Donetsk and Lugansk People’s Republics (DPR and LPR), adding the deployment of forces in Donbass will not be announced right now.

In order to settle the situation, democratic states must first and foremost recognize the will of the residents of the Crimean Peninsula on reconciliation with Russia.

“The first thing that everybody must do is to recognize the will of the people who live in Sevastopol and in Crimea,” he said.

Next, Moscow offers Ukraine to voluntarily drop its plans to join NATO.

“We act out of what many people are saying, including in the Western capitals: that the best resolution of this issue for our colleagues to preserve their faces would be Kiev authorities’ voluntary rejection of accession to NATO. Effectively, they would implement the concept of neutrality.”

“Therefore, the main point – is demilitarization of the modern Ukraine to a certain degree, because this is the only objectively controllable factor, which could be supervised and which could be reacted to.”

“Even acquisition of tactical nuclear weapons in Ukraine means a strategic threat for us,” he said.

‘Western’ media seem confused why Putin made that last point. It was in reply to a threat the Ukrainian president Zelensky had made during the Munich security conference:

Ukrainian President Volodymyr Zelensky said at the Munich Security Conference that he would initiate consultations within the framework of the Budapest Memorandum.

If the summit of the countries participating in the Budapest Memorandum does not take place or does not provide Ukraine with security guarantees, the document will be recognized by Ukraine as invalid along with the points that were signed in 1994, the Ukrainian President said.

The Budapest Memorandum, signed on December 5, 1994, by Britain, Russia, the United States and Ukraine, provided guarantees of Ukraine’s security and territorial integrity in exchange for Kyiv’s surrendering of nuclear weapons. The document entered into force after Ukraine signed the Treaty on the Non-Proliferation of nuclear weapons.

The Ukraine has the materials and knowledge to build nuclear weapons if it wants to do that. It also has the missiles needed to deliver them.

No Russian leader will condone such a threat right next to its border.

If the ‘western’ and Ukrainian officials really wanted to prevent a ‘Russian invasion’ they would now take steps to deescalate the situation.

Unfortunately they are doing the opposite.