One hundred thousand re-tweets is a lot: 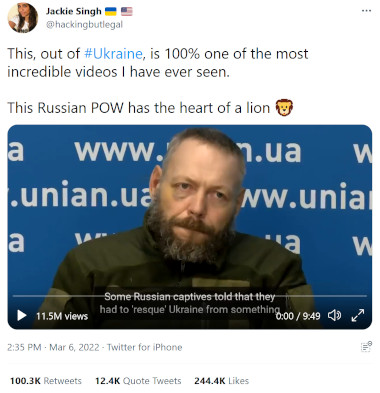 It is indeed a ‘most incredible’ video.

A Russian military commander and prisoner of war in Ukraine said he and his forces were led to believe they were invading the country because “nationalists, Nazis have seized power,” according to a video that surfaced Monday.

Russian Lt. Col. Astakhov Dmitry Mikhailovich was flanked by two badly bruised men as he said they were told in Russia “that Ukraine’s territory is dominated by fascist’s regime,” according to video shared by Ukraine’s News Channel 24, via a translation from the New York Post.

To which Pat Lang remarks:

Comment: Lying to troops going into battle is a really bad idea. When disillusion shows up, they become unreliable like this officer. Officers in the Russian Army have beards?

That ‘officer’ is not unreliable. He does the job his army assigned him to. And no, officers in the Russian army do not have beards.

According to the Chapter 8 Article 344 of the Charter of the Armed Forces servicemen are obliged ‘to regularly bath, brush teeth, cut nails, hair and shave clean’.

The Russian regulations have, as usual, exceptions. Chechen units (Muslim) allow beards as do some special forces. But that dude does not look Chechen and he is certainly not fit enough for a special force command.

Someone Marko tells me that he rather looks like this Ukrainian soldier.

The reverse image search service TinEye tells me that the picture above was first uploaded to imgur.com on February 26. 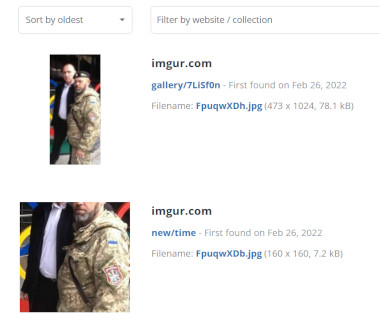 Did that man pictured before or on February 26 since defect to Russia, got commissioned as Russian army officer and then caught be Ukrainian troops?

When in between was he told “that Ukraine’s territory is dominated by fascist’s regime”?

That claim is, by the way, the only somewhat true element of the whole story.