The European Union and China will hold a virtual summit today. Before the summit started Brussels has strewn rumors that it would pressure China to not support Russia.

China is of course rejecting any pressure and retaliates by pointing out Europe’s weak strategic autonomy:

Hours before the China-EU leaders’ meetings on Friday, Chinese analysts warned that China-EU relations cannot be kidnapped by the Ukraine crisis, and Europe should no longer be abducted by the US in foreign policy, as it will greatly undermine the EU’s own interests, making it difficult to ensure economic recovery and people’s livelihood, and runs counter to Europe’s aim of pursuing strategic independence.

As the Russia-Ukraine conflict stretches to over a month, Europe has sustained great pressure resulting from sanctions against Russia and its over-reliance on US-led NATO security structure.

“The EU is now kidnapped by the US on security, but that does not conform to the strategic independence EU has pursued,” [Cui Hongjian, director of the Department of European Studies at the China Institute of International Studies] said.

To avoid being caught in hot water again, the EU must take control of its own destiny. And developing ties with China provides the EU an opportunity to develop in a more balanced and comprehensive way in the long term, he said.

Its reliance on the U.S./NATO is Europe’s core strategic weakness. The U.S. has used it to infiltrate Europe’s decision making structures.

When the current Ukraine crisis began the U.S. announced that it had activated certain sanctions against Russia and told Europe to do the same. Europe then decide to deliver even more sanctions than it was told to do. With that done the U.S. has quietly buried or circumvented some of its own sanctions after it had used them to push the Europeans.

On March 8 the White House announced:

Today, President Biden will sign an Executive Order (E.O.) to ban the import of Russian oil, liquefied natural gas, and coal to the United States – a significant action with widespread bipartisan support that will further deprive President Putin of the economic resources he uses to continue his needless war of choice.

The United States made this decision in close consultation with our Allies and partners around the world, as well as Members of Congress of both parties.
…
Today’s Executive Order bans:

The Executive Order is here and it does seem to prohibit crude oil imports from Russia. 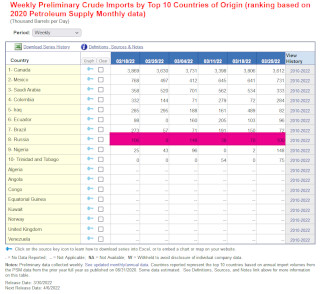 In the week ending March 26 the U.S. still imported 100,000 barrels per day of Russian crude oil.

I explained on March 7 why the U.S. needs the Russian oil:

Some U.S. refineries at the south coast are designed to only process heavy oil variants. Since 2019 the U.S. has blockaded heavy oil imports from Venezuela and replaced them with imports of heavy Ural variants from Russia. It has now send two officials to Caracas to try to get Venezuela’s oil flowing again. That would of course require to lift all sanctions off Venezuela and to return all confiscated companies and the gold that is owned by that country. It is not going to happen anytime soon.

Diesel and heating oil consist of long hydrocarbon chains. Lighter types of crude oil lack these. There are ways to create longer hydrocarbon chains from shorter ones but those processes are expensive. It is much easier to start off with heavy crude oil and to break it down when needed.

Without heavy Russian Ural crude oil the U.S. has no efficient way to create diesel and heating oil. This while we are in a global diesel crisis:

Diesel is what freight transport uses to deliver goods to consumers, but it is also what industrial transport uses for fuel. With Russian refiners cutting their processing rates in the wake of several waves of Western sanctions, already tight diesel supply is going to get a lot tighter.

“Governments have a very clear understanding that there is a clear link between diesel and GDP, because almost everything that goes into and out of a factory goes using diesel,” the director general of Fuels Europe, part of the European Petroleum Refiners Association, told Reuters this week.

Europe is not the only one feeling the diesel pinch, however. Middle distillate stocks are on a decline in the United States, too, Reuters’ John Kemp wrote in his latest column.

The Biden administration announced yesterday that it would release 1 million barrels of crude oil per day from the U.S. Strategic Petroleum Reserve (SPR). While this voter bribe will likely lower elevated gasoline prices it is doubtful that the SPR includes enough heavy crude to make a difference in the diesel market.

It is diesel, more than gasoline, that is driving inflation.

The U.S. is therefore likely to continue to cheat on its own sanctions. Europe should recognize that and should likewise handle its sanction in a matter that lessens the economic effects on itself. It will otherwise ruin its citizens.

It should also handle its relation with China, its largest trading partner, aside from the U.S. and the Ukraine-Russia mess up. Not doing so  only increases the size of the recession it is soon likely to experience.

One thought on “Europe Must Learn To Cheat On Its Sanctions (Just Like The U.S. Is Doing It)”