Did Germany really decide to deliver tanks to the Ukraine?

The German government said Tuesday it will deliver anti-aircraft tanks to Ukraine after facing strong pressure at home and abroad to abandon its reluctance to supply heavy weapons to Kyiv.

The decision to provide the “Gepard” tanks, which come from German defense industry stocks, was made at a closed-door government meeting on Monday, Defense Minister Christine Lambrecht told reporters at a Ukraine security conference at a U.S. airbase in Ramstein, Germany. There was no immediate information on how many tanks Germany would deliver.

The announcement marks a notable shift for Chancellor Olaf Scholz, who as recently as last week was still ruling out sending German tanks to Ukraine, insisting it would make more sense for Eastern NATO countries to give Kyiv old Soviet-era tanks already familiar to the Ukrainian military. Scholz promised Germany would then send those countries replacement German tanks.

I find it amusing how many misunderstand this move. First off – the Gepard (Cheetah) is not a tank as the turret has very little protective armor. 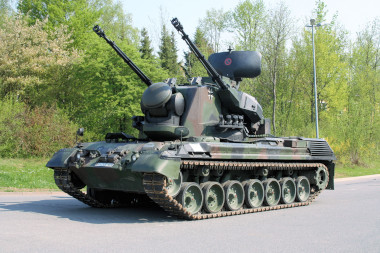 It is a short range (5 km / 3 miles) anti-air system on a tank chassis useful against helicopters, drones and low flying planes.

That Scholz decided to offer these, instead of real tanks or armored infantry carriers as the U.S. and the camouflage-Green party demanded, is a nice way out. It guarantees that the Ukrainians will not be able to use them before the war is over.

The Gepard system with its two 35mm cannons is more than 50 years old but has been upgraded two or three times. The Germany army retired their last one of these in 2010. They have since been held in storage.

I remember them well from my time in the Bundeswehr. While my primary training was as a gunner on a real tank, the Leopard 1A3, two people I knew were trained as gunners for the Gepard. There was a huge difference though. It took 6 months of training to become a reasonably good tank gunner. It took 12 month, including hundreds of hours in a simulator, to become a gunner on a Gepard. The commander role required even more training.

The system was excellent for its time but also really complicate. The two radars have various modes for different purposes. One would better use the right one or risk to attract explosive countermeasures. The startup of the turret systems and the handling of their various error modes that could occur were not easy to handle. The tank chassis is also more complicate than the original one. It has an additional motor which powers five electric generators, two Metadyne rotary transformers and a flywheel to handle the extraordinary fast movements of the turret (2.5 sec for a 360°turn).

There are probably less than ten people in the current Bundeswehr who still know how to operate and maintain a Gepard. There is thus little chance to find German crews for them.

If the Ukrainians really want to use these outdated systems they will have to train fresh crews for at least a year. Otherwise those guns will be ineffective and of little use.

My hunch though is that none of these will ever be delivered. The Swiss, who manufactured the cannons and their ammunition, have seen to that:

Neutral Switzerland has vetoed the re-export of Swiss-made ammunition used in Gepard anti-aircraft tanks that Germany is sending to Ukraine, the government said on Tuesday.

Germany earlier announced its first delivery of heavy weapons to Ukraine to help it fend off Russian attacks following weeks of pressure at home and abroad to do so.

The Swiss State Secretariat for Economic Affairs (SECO) confirmed a report by broadcaster SRF that it had blocked Germany from sending munitions for the Gepard tank to Ukraine.

Chancellor Scholz likely knew all that. The offer of Gepards is a safe way to relieve the pressure put onto him to send arms to Ukraine. It is an offer of a system that can not be used within the timeframe of the war and for which he can not deliver the necessary specialized ammunition.

Are there still some Lockheed F-104 Starfighter in German storage? If so those flying coffins should be offered next.

One thought on “Politico: “Germany approves tank sales to Ukraine, bowing to pressure””