The war in Ukraine is clearly progressing in Russia’s favor. That is why I am appalled by the incompetent descriptions in ‘western’ media of past and current operations in that war.

Consider this June 21 map of the Lysichansk cauldron as it was developing. The frontline extended over 125+ kilometers (78 miles).
END_OF_DOCUMENT_TOKEN_TO_BE_REPLACED

END_OF_DOCUMENT_TOKEN_TO_BE_REPLACED 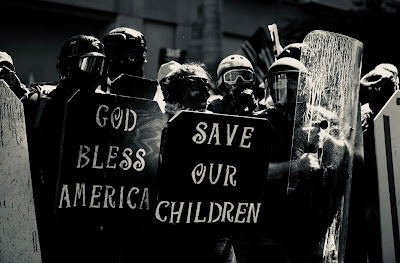 The “United States” fundamentally lacks the characteristics of a nation. Its people have no shared history, culture, or values, because the country they’re in came about artificially. It’s a project for building up capital, constructed on land that was annexed in wars of aggression. America’s Christian nationalists have no actual nation, only a brand. They compensate for this by promoting the myths which maintain the settler state’s illusion of not being an occupation, of being something worth defending. Violence and lies, serving to continue the extraction which fascism’s petty-bourgeois base depends upon, are the tools for survival from an empire that’s imploding in on its contradictions. Christian fascism provides a cultural foundation for this project, so all of its abuses are seen as acceptable by a ruling class that’s increasingly empowering this dangerous tendency.
END_OF_DOCUMENT_TOKEN_TO_BE_REPLACED

If we determine to imagine the world as machine, then ‘reality’ will present itself as a machine, Alastair Crooke writes.

For the last four hundred years, west Europeans have lived one very particular ‘vision’; one that stands poles-apart from that which went earlier. As Galileo pursued his experimentation in Italy, it was Francis Bacon who set out a clear theory of inductive procedure – to make experiments, and to draw general conclusions from them, to be tested in further experiments.

END_OF_DOCUMENT_TOKEN_TO_BE_REPLACED

With no bullets to fire, and no food to eat, some nations will have to bite the bullet

A recent article covered the manpower issues presently facing Kiev, yet in spite of there being so few to pick up arms, those weapons are useless unless there is ordnance to fire. This article will examine yet another problem blighting both the Ukraine and potentially the West.
END_OF_DOCUMENT_TOKEN_TO_BE_REPLACED