After the first Ukrainian attempt to push towards had failed it is now reinforcing that failure. As I describe the move:

The only ‘successful’ attack was across the Inhulet river near Andriivka in the direction of the dam and river crossing that closes off the Kakhovka Dnieper reservoir.

The troops were cut off and mostly destroyed. On the western side of the salient a Russian unit crossed the Inhulet towards north and attacked the Ukrainians on that side. It soon had to pull back and the Ukrainians used the Russian crossing to reconnect with the cut off units in the salient. 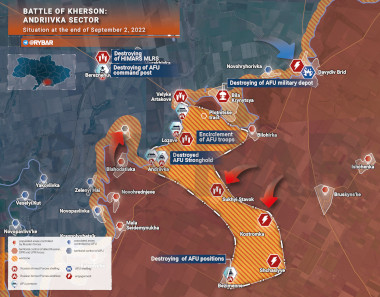 More Ukrainian reinforcements were pushed into the salient where they have little natural protection from Russian artillery and air force attacks. 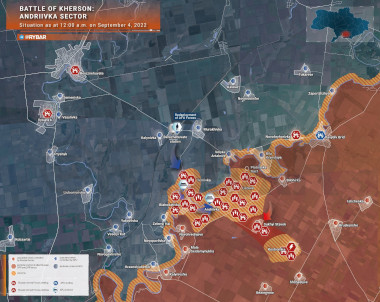 The political leadership of Ukraine is committed to continue this massacre. The Ukrainian Telegram channel ‘Resident’ reported:

Our source in the OP said that Zelensky holds a meeting every day on the counteroffensive in the South of Ukraine, at the moment the Armed Forces of Ukraine have the opportunity to create a foothold in the Krivoy Rog direction. Zalusky reported on the heavy fighting and losses suffered by the Ukrainian army in the steppes, but the political center of influence insist on continuing the #Battle_for_Kherson operation.

Reserves from the eastern front and Kharkov will be transferred to the Dnepropetrovsk region, in order to achieve the advantage of the Armed Forces of Ukraine, no information will be officially published in the media until the seizure of territories.

Ukrainian channel Legitimny reports Helensky is prepared to sacrifice up to 20K dead and 40k wounded in the Kherson offensive, which would be 6% of his army. Current losses are around 2% so he’s going for 2nd offensive wave.

‘Resident’ and ‘Legitimny’ are seen as authoritative Ukrainian sources. Unfortunately I have no access to the their Telegram channels so I can not verify the quotes. But it seems clear that Zelenski is going for broke.

Zalusky, the military leader of the Ukrainian army, will not be happy with this decision.

The only Ukrainian hope is that the Russian forces on the western side of the Dnieper can be cut off from the other side to then run out of supplies. The bridges across are damaged or destroyed but Russia has enough ferries to keep the supply line open. Large river crossing are part of every bigger Russian military training event. It has the materials and troops experienced with it. That is why I have my doubt that the Ukrainian hope can be realized.

Meanwhile the Russian military plays its usual defensive game. The frontline along the Kherson regions is currently held by lightly armored airmobile units. Whenever a Ukrainian push gets too strong they pull back from the front line, or leave the town under threat, to let the artillery and airforce do its work. They then pull up mobile reinforcements and push back until they are in their old positions. Rinse and repeat.

While this tactic costs the Russian side some losses the much higher ones are on the Ukrainian side.

Russia’s “domain control” can be put in perspective: the enemy is, on the one hand, caught on the bare steppe and cut down with the overwhelming superiority of Russian artillery and aviation, and, on the other hand, encountering well-fortified, entrenched defence lines.

That said, Zelensky cannot give up, as he is desperately in need of a success story. Kiev still hopes to reverse the situation, but how that is achievable remains to be seen.

Against this sombre backdrop, more and more sceptical voices are being heard in the US about the Biden Administration’s policy trajectory. The latest is an opinion piece in Wall Street Journal by Gen. (Retd) Mark Kimmitt, formerly Assistant Secretary of State for Political-Military Affairs in the Bush administration. Kimmitt predicts that “a breakthrough is unlikely” and soon, “logistics shortfalls” may force a change in US strategy.
…
In principle, the options are: i) “dig deeper into NATO stockpiles being held back for national defences”; ii) “ramp up critical shortfalls” by invoking Defense Production Act and its European equivalents; iii) escalate the conflict by targeting Crimea and Russia itself; or, iv) forcing Zelensky to face the grim reality that “diminishing resupplies” of weaponry actually contains “the message of declining outside support” for the war itself.

The retired general with Republican Party leanings concludes: “Beginning the diplomatic resolution would be distasteful, and perhaps seen as defeatist, but as there is little chance of climbing out of the current morass, it may be better to negotiate now than later… Looking into a future of protracted war, diminishing high-tech systems and mounting casualties, Mr. Zelensky and NATO must face up to tough decisions before those decisions are forced on them.”

Of those four options the first will be rejected by the professional military. The second is, at least in Europe, currently impossible for lack of cheap energy. Metal smelters and forges in Europe are shutting down. The third option, escalation, is the one the neoconservatives will press for, likely with some success. The fourth option is one Joe Biden and other are yet unwilling to take.

I therefore expect that the U.S. will double down, most likely with some new attacks on Crimea and the Kerch bridges.

One thought on “Kherson ‘Counteroffensive’ – Zelenski Is Going For Broke”