The process will be, as usual, a very dirty business – knives will be out to backstab certain candidates, deals will be made, favors will be promised and not be held, people will be lied to. The Independent later confirmed my hunch:

At his final Prime Minister’s Questions, Boris Johnson dropped a particularly heavy hint to the cheering benches behind him – some of whom actually cannot wait to be rid of him – that his favoured candidate in the leadership election is Liz Truss.

Perhaps exaggerating the facts and over-simplifying complex arguments, the prime minister declared that his successor should go for tax cuts and deregulation.
…
Given that Rishi Sunak was in charge of the Treasury until recently, and wants to put beating inflation before tax cuts, it doesn’t take Alan Turing-level skills to decipher that remark.

Liz Truss is less competent than Boris Johnson but at the same level when it comes to lying. She also has no empathy. In the end she will look worse in office than Johnson did.

The damage of the Brexit disaster is still getting worse. The energy crunch, caused by the economic war waged against Russia, is tearing the country apart. The British aircraft carrier Prince of Wales, which has no aircraft, broke a shaft and needs to pull into a drydock. The National Health Service is turning patients away for lack of resources.

Truss will worsen all that.

But the billionaires and banksters of the City of London will still applause her for lowering their taxes.

The first world war in Europe was largely about a declining British empire that feared the upcoming German competitor. It severely damaged the empire. The second world war finished it off.

Boris Johnson’s Brexit has ruined Britain’s real economy by cutting off its European markets. Now Liz Truss will ruin whatever is left of a once great empire.

With the election process rigged for the Tories and the Labour leadership held by the hapless and vindictive Ken Starmer there is little chance for regime change in Britain. When Truss falls the premiership could even go back to Boris Johnson. 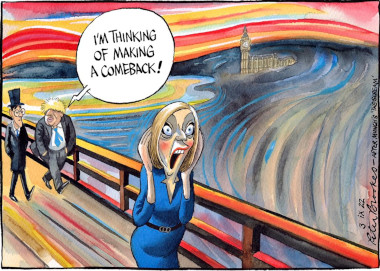