The President of Kazakhstan Kassym-Jomart Tokayev made a tantalising remark to reporters on Sunday that his country will pursue a multi-vector policy. As he put it, “I believe that given our geopolitical situation, given the fact that we have over $500 billion involved in our economy, given that there are global companies operating in our market, we simply have to pursue a multi-vector, as they say now, foreign policy.”

END_OF_DOCUMENT_TOKEN_TO_BE_REPLACED

US president Joe Biden (R) and Chinese president Xi Jinping met at Bali, Nov 14, 2022. Biden said they discussed their responsibility to prevent competition and find ways to work together.

The seventeenth G20 Heads of State and Government Summit held in Bali, Indonesia, on 15–16 November stands out as a consequential event from many angles. The international politics is at an inflection point and the transition will not leave unaffected any of the institutions inherited from the past that is drifting away forever.

END_OF_DOCUMENT_TOKEN_TO_BE_REPLACED

The increasingly irrelevant G20 Summit concluded with sure signs that BRICS+ will be the way forward for Global South cooperation.

The redeeming quality of a tense G20 held in Bali – otherwise managed by laudable Indonesian graciousness – was to sharply define which way the geopolitical winds are blowing.

END_OF_DOCUMENT_TOKEN_TO_BE_REPLACED

Governments of many countries have recently been talking more and more about a possible food crisis in the near future, actively involving representatives from the UN and other international organizations, and numerous media platforms in this information campaign.

END_OF_DOCUMENT_TOKEN_TO_BE_REPLACED

Background to the new Nuremberg Trials 2021 :

A large team of more than 1,000 lawyers and over 10,000 medical experts, led by Dr. Reiner Fuellmich, has initiated legal proceedings against the CDC, WHO and the Davos Group for crimes against humanity.

END_OF_DOCUMENT_TOKEN_TO_BE_REPLACED

[Of course, this ‘poll’ depends on what definition of ‘democracy’ the polled accept. And then there’s the technics of conducting the poll, the questions asked and who was polled, so all in all, I’d suggest that the results tell us more about the institution doing the polling, NATO, than the polled, and anyway, why is NATO conducting this poll in the first place and then NOT revealing the findings to the publics at large? WB]

A NATO front organization recently released their polling report “Democracy Perception Index 2021”, and its poll-findings in the 53 surveyed countries contradict more than confirm what NATO’s own propaganda routinely asserts; so, though these findings are major news, they are suppressed, instead of publicized, by NATO, and are practically a secret NATO poll. These rankings are published here for the very first time; they weren’t published, at all, in the NATO-affiliated report, but I calculated them from the data, which were published (and even those data were suppressed by the polls’ sponsors).

END_OF_DOCUMENT_TOKEN_TO_BE_REPLACED 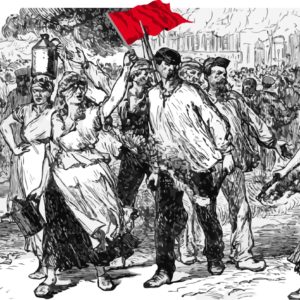 Illustration of the Paris Commune adapted from the century edition of Cassell’s History of England, (ca. 1900)

Alain Badiouis a French philosopher, formerly chair of philosophy at the École normale supérieure and founder of the faculty of philosophy of the Université de Paris VIII. He is the author of numerous books and essays.

This essay is adapted and updated from Polemics, translated by Steve Corcoran (London: Verso, 2006). The new sections have been translated by James Membrez.

END_OF_DOCUMENT_TOKEN_TO_BE_REPLACED

[Unfortunately, this PDF document contains only the author’s name and the date of its creation and I’ve not been able to find any other information on him. WB]

I have grave concerns over recent rhetoric, from government and private businesses, regarding the introduction of COVID-Status certificates and/or COVID-19 vaccine certificates/immunity passports.

END_OF_DOCUMENT_TOKEN_TO_BE_REPLACED

These notes were based on an interview with me by Swiss-based journalist Thomas Schneider in German in early May.

A sugar rush or economic recovery?

The IMF foresees a strong economic recovery. The assumption is that the virus can be controlled to such an extent that lockdowns and social distancing are no longer necessary. This is mainly due to the vaccination campaigns.

END_OF_DOCUMENT_TOKEN_TO_BE_REPLACED

The underlying mission of Collateral Global is to openly evaluate COVID-19 related public health measures, including their second- and third-order effects.

But that’s not all we do.

END_OF_DOCUMENT_TOKEN_TO_BE_REPLACED

Neve Gordon and Mark LeVine explain why the  International Holocaust Remembrance Alliance definition of antisemitism has been so successful.

Was Albert Einstein an anti-Semite? Was Hannah Arendt? These questions may sound ludicrous. Yet, according to the definition of anti-Semitism that more than 30 countries — including the United States through the Biden Administration  — recently adopted, these  two leading intellectuals could very well be labeled as such. This is due to an open letter they sent on December 4, 1948 to the New York Times, claiming that the right-wing Herut Party in the newly formed State of Israel was “closely akin in its organization, methods, political philosophy and social appeal to the Nazi and Fascist parties.”