Here is a list of things you can do to help. Everyone can do at least one of these.

1) Put 18 May firmly in your diary. The hearing stands adjourned until 18 May. Turn up on 18 May and join the protests there all day – show the world this is a political trial, and we know it. Woolwich Crown Court is walking distance from Plumstead Railway Station in South East London. If you feel able to do so, bring your tent and join the Free Assange Village that sets up on the grass banks around the court – there is loads of available space. But if you can just turn up for the day, that is just as valuable. Protests will roll on every day throughout the hearing which will continue for a minimum of three weeks.

END_OF_DOCUMENT_TOKEN_TO_BE_REPLACED

By Thomas Scripps and Chris Marsden

Journalist Cassandra Fairbanks has revealed an explosive series of communications on the case of WikiLeaks founder Julian Assange between herself and Republican operative Arthur Schwartz.

END_OF_DOCUMENT_TOKEN_TO_BE_REPLACED

The trial against WikiLeaks founder Julian Assange is a perfect metaphor for how United States imperialism operates in the world today.The Armed Forces, the Department of State, and the CIA caused thousands of deaths in Afghanistan, Iraq, Libya or Syria, but it’s the person who showed to the world those crimes who is going to be sentenced to 175 years in prison for 18 crimes (17 of them described in the Espionage Act of 1917, passed on the occasion of War World I).

END_OF_DOCUMENT_TOKEN_TO_BE_REPLACED

The propagandists have all gone dead silent on the WikiLeaks founder they previously were smearing with relentless viciousness, because they no longer have an argument. The facts are all in, and yes, it turns out the US government is certainly and undeniably working to exploit legal loopholes to imprison a journalist for exposing its war crimes. That is happening, and there is no justifying it.

END_OF_DOCUMENT_TOKEN_TO_BE_REPLACED

Julian Assange’s extradition hearing came to an end on Thursday; a trial which, according to his supporters bears all the hallmarks of a ‘show trial’ straight from the pages of a Kafka novel. The former Wikileaks editor, has already served around 13 years in arbitrary detention, despite not having been charged with any crime.  If there was ever any confirmation of the helplessness of the individual in relation to the state, this was it. And if there was ever any demonstration needed that the West is moving away from democracy towards authoritarianism, this was it.

END_OF_DOCUMENT_TOKEN_TO_BE_REPLACED

In Thursday’s separate hearing on allowing Assange out of the armoured box to sit with his legal team, I witnessed directly that Baraitser’s ruling against Assange was brought by her into court BEFORE she heard defence counsel put the arguments, and delivered by her entirely unchanged.

END_OF_DOCUMENT_TOKEN_TO_BE_REPLACED

It’s quite fitting that the – imperially pre-determined – judicial fate of Julian Assange is being played out in Britain, the home of George Orwell.

As chronicled by the painful, searing reports of Ambassador Craig Murray, what’s taking place in Woolwich Crown Court is a sub-Orwellian farce with Conradian overtones: the horror…the horror…, remixed for the Raging Twenties. The heart of our moral darkness is not in the Congo: it’s in a dingy courtroom attached to a prison, presided by a lowly imperial lackey.

END_OF_DOCUMENT_TOKEN_TO_BE_REPLACED

Assange, verb. Use: To be assanged.
Meaning: when the nationless alliance of elites imprison a dissident by using their power to manipulate vagaries in the laws of their respective nations.
Eg “I have information on war crimes that I should leak but I don’t want to be assanged.”

END_OF_DOCUMENT_TOKEN_TO_BE_REPLACED

LONDON – Over the first two days of WikiLeaks founder Julian Assange’s U.S. extradition hearing, the majority of the drama has taken place in the well of the court, but that all changed on Wednesday as the focus gradually drifted to the back of the room, behind adjoined panels of bulletproof glass.

END_OF_DOCUMENT_TOKEN_TO_BE_REPLACED 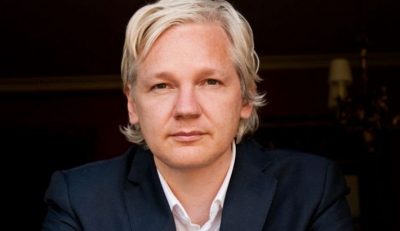 END_OF_DOCUMENT_TOKEN_TO_BE_REPLACED

February 25, 2020
Consortium News is in London to cover the formal extradition process of WikiLeaks publisher Julian Assange and will provide updates today and throughout the week.

END_OF_DOCUMENT_TOKEN_TO_BE_REPLACED

In yesterday’s proceedings in court, the prosecution adopted arguments so stark and apparently unreasonable I have been fretting on how to write them up in a way that does not seem like caricature or unfair exaggeration on my part. What has been happening in this court has long moved beyond caricature. All I can do is give you my personal assurance that what I recount actually is what happened.