Today, the corporate media that cried “Media freedom” when Extinction Rebellion blocked the billionaire owned propaganda presses, is silent as Julian Assange’s Calvary for bringing real truth unfiltered to the public moves on to its next station; the macabre Gothic architecture of the Old Bailey.

END_OF_DOCUMENT_TOKEN_TO_BE_REPLACED

On September 7, Julian Assange will be facing another round of gruelling extradition proceedings, in the Old Bailey, part of a process that has become a form of gradual state-sanctioned torture.  The US Department of Justice hungers for their man.  The UK prison authorities are doing little to protect his health.  The end result, should it result in his death, will be justifiably described as state-sanctioned murder.  This picture was not improved upon by a prison visit from his partner, Stella Morris, accompanied by their two children.  Almost six months had passed since the last meeting.

END_OF_DOCUMENT_TOKEN_TO_BE_REPLACED

“I have never in my career faced so much difficulty attempting to trial monitor as in Julian Assange’s case.” — Rebecca Vincent, Director of International Campaigns for Reporters Without Borders.

There were bizarre scenes at Westminster Magistrates’ Court in London today, as the extradition process of Wikileaks co-founder Julian Assange (present via videophone from Belmarsh prison) was again delayed.

END_OF_DOCUMENT_TOKEN_TO_BE_REPLACED

The book of hours on Julian Assange is now being written. But the scribes are far from original. Repeated rituals of administrative hearings that have no common purpose other than to string things out before the axe are being enacted.

END_OF_DOCUMENT_TOKEN_TO_BE_REPLACED

Julian Assange faces extradition from the United Kingdom to the United States, where he has been indicted on 18 counts for obtaining, possessing, conspiring to publish and for publishing classified information. The indictment contains 17 counts under the Espionage Act of 1917 and one charge of conspiring with a source to violate the Computer Fraud and Abuse Act, which uses Espionage Act language. This is the first ever use of such charges for the publication of truthful information in the public interest, and it represents a gravely dangerous attempt to criminalise journalist-source communications and the publication by journalists of classified information.

END_OF_DOCUMENT_TOKEN_TO_BE_REPLACED 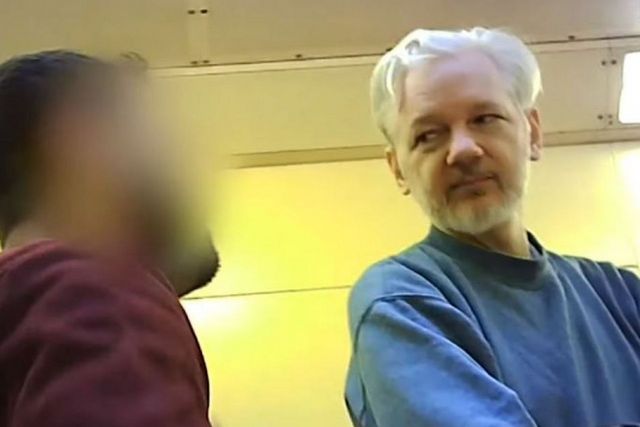 “Mr Assange will be facing a David and Goliath battle with his hands tied behind his back.”

Julian Assange must have had time amidst cramped and hostile surrounds, paper work, pleas and applications, to ponder what circle of Dante’s Hell he finds himself in.  Ailing but still battling, the WikiLeaks publisher, through his lawyers, made another vicarious appearance at the Westminster Magistrates’ Court on Monday to delay the next stage of extradition proceedings slated for May 18.  He would have appeared via video link, but medical advice suggested it would be unsafe for him to do so at Belmarsh prison.

END_OF_DOCUMENT_TOKEN_TO_BE_REPLACED

Unfortunately I am in lockdown at home in Edinburgh and cannot get down to Westminster Magistrates Court for Julian Assange’s urgent bail application today. Several hearings ago, Magistrate Baraitser stated pre-emptively that she would not grant bail, before any application had been made. Today’s application will argue that Assange’s ill health puts him at extreme danger from COVID-19, and that prison conditions make it impossible to avoid infection.

END_OF_DOCUMENT_TOKEN_TO_BE_REPLACED

Doctors 4 Assange, who are the many doctors who sent a letter to the Home Secretary in Great Britain, tweeted a concerning statement today.  According to them, Craig Murray’s reporting on the trial of Assange only escalated his mistreatment rather than helping to aid Assange.

END_OF_DOCUMENT_TOKEN_TO_BE_REPLACED

Here is a list of things you can do to help. Everyone can do at least one of these.

1) Put 18 May firmly in your diary. The hearing stands adjourned until 18 May. Turn up on 18 May and join the protests there all day – show the world this is a political trial, and we know it. Woolwich Crown Court is walking distance from Plumstead Railway Station in South East London. If you feel able to do so, bring your tent and join the Free Assange Village that sets up on the grass banks around the court – there is loads of available space. But if you can just turn up for the day, that is just as valuable. Protests will roll on every day throughout the hearing which will continue for a minimum of three weeks.

END_OF_DOCUMENT_TOKEN_TO_BE_REPLACED

By Thomas Scripps and Chris Marsden

Journalist Cassandra Fairbanks has revealed an explosive series of communications on the case of WikiLeaks founder Julian Assange between herself and Republican operative Arthur Schwartz.

END_OF_DOCUMENT_TOKEN_TO_BE_REPLACED

The trial against WikiLeaks founder Julian Assange is a perfect metaphor for how United States imperialism operates in the world today.The Armed Forces, the Department of State, and the CIA caused thousands of deaths in Afghanistan, Iraq, Libya or Syria, but it’s the person who showed to the world those crimes who is going to be sentenced to 175 years in prison for 18 crimes (17 of them described in the Espionage Act of 1917, passed on the occasion of War World I).

END_OF_DOCUMENT_TOKEN_TO_BE_REPLACED

The propagandists have all gone dead silent on the WikiLeaks founder they previously were smearing with relentless viciousness, because they no longer have an argument. The facts are all in, and yes, it turns out the US government is certainly and undeniably working to exploit legal loopholes to imprison a journalist for exposing its war crimes. That is happening, and there is no justifying it.