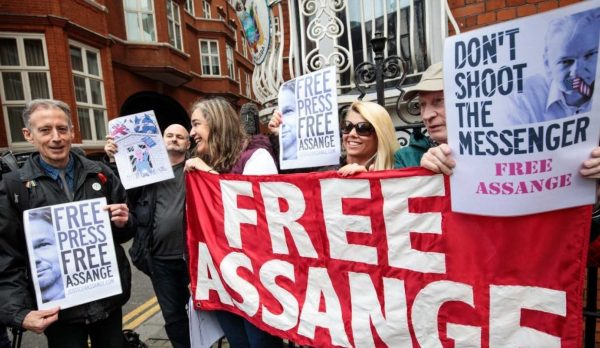 Julian Assange, whose deteriorating condition has been noted for months by psychologists, doctors and UN Special Rapporteur on torture Nils Melzer, has been making a fist of it in the dock, despite being in Kafkaesque isolation.  Exhaustion, however, is manifest.  Judge Vanessa Baraitser has been keeping an eye on Assange’s demeanour, prodding his lawyers at one point to inspect him.  His eyes had closed, his attention seemingly wavering.  A point of permanent frustration for the WikiLeaks founder has been the din the hearings are causing and the distance, physical and symbolic, from his legal team.  “I am as much a participant in these proceedings I am at Wimbledon.”

The singular nature of Assange’s case has not struck the judge as sufficient grounds to accept special measures.  The defence team insists, not unreasonably, that legal advice given to him be kept privileged.  This is a particularly sore point, given the surveillance efforts conducted by UC Global SC in Assange’s place of abode for some seven years, London’s Ecuadorean embassy.  This involved audio and film footage on lawyers visiting and discussing case matters with Assange relayed to servers accessible to the Central Intelligence Agency.  “There has been enough spying on my lawyers already.  The other side has about 100 times more contact with their lawyers per day.  What is the point of asking if I can concentrate if I cannot participate?”

To these points the judge remained dismissive, annoyed at his intervention in the absence of testifying.  “I can’t make an exception in your case.”  A brief recess did follow, permitting Assange to leave the dock for a backroom consultation with his legal team.  True to form in this entire charade, security officers were in their company.

The defence team then attempted to convince the bench to adjust future seating arrangements which would permit Assange to sit with them.  This led to a technical lunacy: Did the request, pondered the judge, constitute a bail application in which Assange would technically be out of the court’s custody?  The legal team representing the United States did not object, as security officers would be present on either side of him.  “I’m not sure it’s so technical as that,” came the assessment from James Lewis QC.  The judge, torn by convention and legal minutiae, was tart in response. “I’m not you’re right Mr Lewis.”  An application will be heard to that effect on Thursday, though Lewis did make it clear that any bail application would be opposed.

As for the extradition treaty itself, Article 4 stipulates that, “Extradition shall not be granted if the offense for which the extradition is requested is a political offense.”  The team representing the US government suggested that the judge have recourse to substantive UK domestic law, not the Treaty itself.  Whether Assange was wanted for political reasons or not was irrelevant as he was “not entitled to derive any rights from the [US-UK Extradition] Treaty”.

The prosecution effectively relied on a peculiarity of the Westminster system: the Treaty, ratified in 2007, had not been incorporated into UK domestic law.  That domestic law can be found in the Extradition Act 2003, which does not feature political offenses as a bar to extradition.  “There’s no such thing as a political offense in ordinary English law”, something that only arose in the context of extradition.

Assange’s team took issue with the contention: the Extradition Treaty as ratified in the US in 2007, in not removing the political offense provision, was intended to have legal effect.  “It is an essential protection,” argued Edward Fitzgerald QC, “which the US puts in every single one of its extradition treaties.”  It followed that, “Both governments must therefore have regarded Article 4 as a protection for the liberty of the individual whose necessity continues (at least in relations between the USA and the UK).”  While the 2003 Extradition Act did not include a political offence bar, “authority establishes that it is the duty of the court, not the executive, to ensure the legality of extradition under the terms of the Treaty.”  This placed an onus on the judge, submitted Fitzgerald, to follow a practice set by over a century of extradition treaties which consider the political offence exemption.

Resort should also be had to the Magna Carta and Article 5 of the European Convention on Human Rights (the “right to liberty and security” provision) to reach a conclusion that extraditing an individual for a political offence would constitute an abuse of process.

The defence also turned to the issue of espionage itself, arguing that there was little doubt that it was political in nature, or, as Fitzgerald contended, “a pure political offence” within the meaning of the US-UK Extradition Treaty and relevant case law.  The conspiracy to commit computer intrusion, the 18th charge being levelled at Assange, also suggested that it be treated as an espionage offence.  In fact, the entire case and effort against Assange had been political from the start, with US politicians, commentators and members of the media branding him “hostile” and “treasonous” despite not being a US citizen.

Fitzgerald also furthered the legal principle – “virtually universal”, he contended – that non-violent individuals should not be extradited for political offences. “If it is not a terrorist case, a violence offence, you should not be extradited for a political offence.”  More in keeping with the work of non-governmental organisations, extraditing Assange would embolden other powers to consider this pathway to seek those responsible for “disclosures that are uncomfortable or threatening.”  Governments of all political hues will be taking heed from this.