Arab Israelis and Palestinians say arrest of Sheikh Raed Salah in London is ‘strange’ and ‘illegitimate’, and call for his release 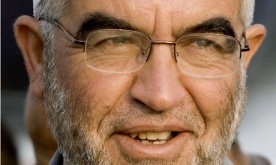 Arab Israelis and Palestinians have accused the British government of collaborating with Israel in detaining Sheikh Raed Salah, the leader of the Islamic Movement in Israel.

Ibrahim Sarsur, a United Arab List member of the Knesset, the Israeli parliament, described the arrest of Salah as ‘strange’. He said: ‘Sheikh Salah is one of the leading figures in the Arab Israeli community. He travelled to the UK legitimately, and he had no knowledge of any ban on his entering the UK, so we are surprised and disappointed by this illegitimate procedure.’

Sarsur called on Britain to release Salah immediately. ‘We know that Israel is not happy with anyone that opposes its policies, but we see Britain as the most democratic place in the world and the birthplace of democracy. Britain should deal with delicate matters of the Middle East with delicacy and not act as a collaborator with the Israeli government.’

Ben White, a writer and activist who was due to speak at an event with Salah on Wednesday, said there was a stark contrast between how Britain treated Palestinian and Israeli leaders. ‘The same government that sent police to arrest a Palestinian civil society leader from his hotel bedroom is changing UK legislation explicitly to facilitate the entry of accused Israeli war criminals,’ he said.

Israel has acted angrily in the past when its army officers and politicians have been threatened with arrest, such as when the former foreign minister Tzipi Livni had to postpone a trip to the UK to avoid arrest in 2009.

A spokesman for the Israeli foreign ministry said that the Israeli consulate in London had been informed of the arrest as would happen with the arrest of any Israeli. ‘It’s up to the British authorities to explain the reason for the arrest. Sheikh Raed Salah will be visited by consular officials if it is necessary.’

Salah is despised by Israel’s right wing and his arrest was used as an opportunity by one member of the Knesset to launch his own ‘Raed Salah bill’. Alex Miller of the Israel Our Home party said the bill would prevent people such as Salah, convicted of aiding a terrorist organisation, from using government-funded institutions.

‘If the British government forbade this man from entering its territory because of his extremist views and a fear that he would use public and academic forums to incite violence and racism, there is no reason the Israeli government should give that pleasure to Salah and his peers,’ Miller told the Jerusalem Post.