‘A Global Industry Is Raiding Treasuries All Over the Planet’

Janine Jackson interviewed James Henry about the Panama Papers for the April 15, 2016, episode of CounterSpin. This is a lightly edited transcript. END_OF_DOCUMENT_TOKEN_TO_BE_REPLACED

My previous note was a little premature. Yes, I have added and gone through all the essays but I’ve not checked everyone for links and so forth and searching through each essay and checking links and typos (not that they’re bad necessarily but they may send you to the wrong Website!) is  incredibly tedious and a long-winded process and I get bored easily. But it’s all here and in relatively good shape at long last.

If you have opted out, recently or before, your choices are now being honoured.

Thanks to all those who helped make this happen – especially you, our supporters, donors and friends.

The institutions involved did the right thing in the end, even if they tried all the other things first.

END_OF_DOCUMENT_TOKEN_TO_BE_REPLACED

19 April 2016 — The Wolf Report: Nonconfidential analysis for the anti-investor

Fears over British EU referendum hold back hiring and investment

END_OF_DOCUMENT_TOKEN_TO_BE_REPLACED

While ‘social media’ like Facebook and Twitter are forms of corporate media, it is unarguable that they and other web-based outlets have helped empower a serious challenge to traditional print and broadcast journalism. For the first time in history, uncompromised non-corporate voices are able to instantly challenge the filtered ‘mainstream’ version of events. This certainly helps explain the rise of Labour’s Jeremy Corbyn, Podemos in Spain, and now Bernie Sanders in the US.

END_OF_DOCUMENT_TOKEN_TO_BE_REPLACED

Apparently, if you’ve seen the news, the leaked Panama Papers[1], from the “tight lipped” (Economist) Panamanian law firm Mossack Fonseca & Co, are spilling the beans on the details of what the rich, powerful and greedy “beyond avarice” get up to with unseemly amounts of dosh, in 214,488 offshore tax havens. Mossack Fonseca & Co has been under investigation and intense scrutiny for some time. Ken Silverstein contributing editor for Vice who had cased the Mossack Fonseca & Co joint, two years before the Panama Papers disclosure, writing: “If shell companies are getaway cars for bank robbers, then Mossack Fonseca may be the world’s shadiest car dealership.” True but the Mossack Fonseca shenanigans are part of the problem but not the endemic problem. The endemic problem is American financial hegemony.  Mossack Fonseca’s  offices have just been raided almost certainly because Panamanian politicians and their dealers (they are all in need of a fix) will be implicated in all sorts of sordid stuff.  And one expected that.

END_OF_DOCUMENT_TOKEN_TO_BE_REPLACED

The CNN story (4/6/16) that laid out the Clinton campaign’s anti-Sanders strategy: “Disqualify him, defeat him and unify the party later.”

On Tuesday, April 5, Bernie Sanders won the Wisconsin Democratic primary by double digits, and his victory speech ran for half an hour on CNN, a rare media moment when he was able to repeat the issues that have resonated with many Democratic primary voters.

After the Wisconsin loss, the Hillary Clinton campaign went into high gear, sending emails out announcing a new strategy of going negative. The next day, CNN (4/6/16) ran a piece by senior Washington correspondent Jeff Zeleny that began, “Hillary Clinton’s campaign is taking new steps to try and disqualify Bernie Sanders in the eyes of Democratic voters.” The story laid out Clinton’s new “three-part strategy” with regard to Sanders: “Disqualify him, defeat him and unify the party later.”

END_OF_DOCUMENT_TOKEN_TO_BE_REPLACED

The comedian Billy Connolly once observed that politicians aren’t like the rest of us. They don’t look like us, don’t sound like us, and they rarely talk about issues that matter deeply to mere voters.

Senator Bernie Sanders, candidate for the Democrat’s US Presidential nomination, on the other hand, does look and talk like ‘ordinary’ people. He is the kind of smart, straight-talking, Jewish New Yorker celebrated by shows like Seinfeld and Curb Your Enthusiasm.

END_OF_DOCUMENT_TOKEN_TO_BE_REPLACED 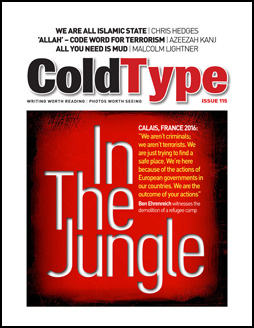 REFUGEES, NOT TERRORISTS – Ben Ehrenreich ventures into the Jungle refugee camp in Calais, France, and finds . . . not terrorists, but troubled people who have fled their homes due to Western-backed aggression. In other, related, essays, Chris Hedges shows how we in the West are as guilty of terror as is ISIS, while Azeezah Khan wonders why our legal systems are so eager to brand Muslims as terrorists. In other stories, Adam Hochschild tells how Texaco supported fascism during the Spanish civil war, David Niddrie and Adrian de Kock look at student strife in South Africa, and Marjorie Cohn contrasts human rights in Cuba with those in the USA. END_OF_DOCUMENT_TOKEN_TO_BE_REPLACED

A new report from FAIR looks at a year’s worth of anonymity in the New York Times, with media critic Reed Richardson taking an in-depth look at how unnamed sources were used in the paper in 2015. His research substantiates that the observation Times public editor Margaret Sullivan made in 2014 (12/29/14) is still true: “Anonymity continues to be granted to sources far more often than a last-resort basis would suggest.” Among Richardson’s findings: END_OF_DOCUMENT_TOKEN_TO_BE_REPLACED