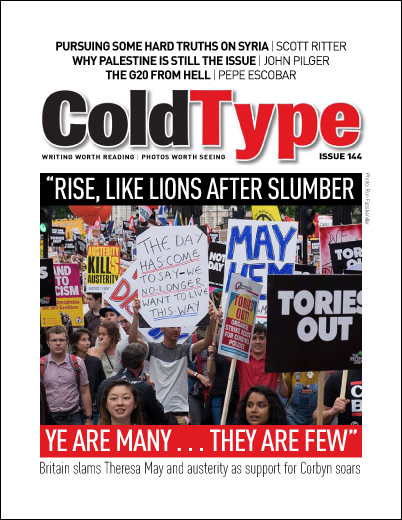 END_OF_DOCUMENT_TOKEN_TO_BE_REPLACED

AP story on CBS‘s site (8/10/16) on how many ISIS fighters have been “taken off the battlefield.”

One of the hoariest methods of modern war propaganda remains the official body count. Government or military officials decisively touting large numbers of enemies killed has long been a surefire way to get credulous or friendly press coverage, despite the fact that the figures cited are routinely presented with no evidence to back them up or context about how they are counting this “enemy.” This dubious practice of body count reporting reached its peak during the Vietnam War, when the US government relied upon this fabulism as a consistent tactic to prop up a failing war effort, as FAIR’s Jeff Cohen recounted (5/6/01):

END_OF_DOCUMENT_TOKEN_TO_BE_REPLACED

Mosul’s Bloodbath: ‘We Killed Everyone – IS, Men, Women, Children’

A cat steals across a ruined street with a piece of fresh meat hanging from its jaws. It is inevitably human.

END_OF_DOCUMENT_TOKEN_TO_BE_REPLACED

The renowned sociologist Maria Páez Victor at Law Commission of Ontario in Canada, deeply analyses the Venezuela’s Constituent Assembly to be voted on July 30, in the context of the Caribbean nation, and speaks on the biggest challenges the Bolivarian Revolution faces today.

END_OF_DOCUMENT_TOKEN_TO_BE_REPLACED

The US government has finally announced an end to its years-long program to arm and train Syrian rebels. The initiative, one of the CIA’s largest covert operations, with billions of dollars of funding, fueled mass killing in Syria and significantly prolonged the country’s horrific war. Widely respected experts have also acknowledged that it greatly strengthened murderous extremist groups like ISIS and Al Qaeda.