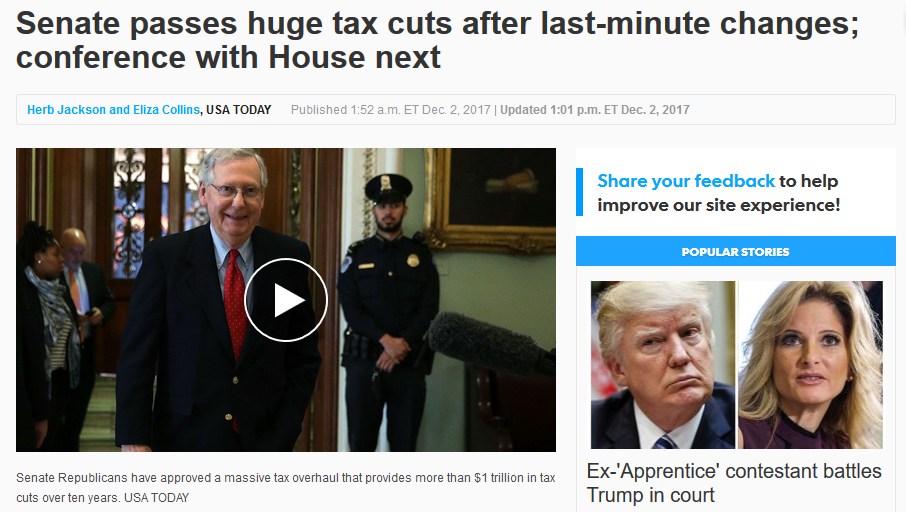 But under the cover of a shallow understanding of “balance,” corporate media have internalized the outlandish idea that it is “partisan,” and thus not “neutral,” to acknowledge the undeniably destructive effects of particular political policies. These inconvenient facts are hence not emphasized in news reporting, and cannot be presented alone without being “balanced” with an opposing perspective—even if that contrary view is demonstrably false.

In the case of the GOP legislation, which will slash the corporate tax rate and add some $1.4 trillion to the national debt, the deception took a variety of forms.

The primary distortion, as noted, was portraying the Senate GOP bill as a massive “tax break.” Headlines and reports spoke of “tax cuts” and “tax breaks” vaguely, without indicating that the breaks were not for Americans as a whole, but rather for corporations and the rich.

By way of contrast, HuffPost (12/2/17) provided an apt corrective to the vagueness: “Senate Passes Massive Tax Cuts for the Rich in Middle of the Night.” While The Atlantic (12/2/17) had a euphemistic main headline—”Senate Republicans Pass Their Tax Cuts”—the subhead clarified: “The bill slashes corporate tax rates, but millions of middle-class families could face tax increases under the $1.47 trillion bill.”

The Intercept (12/1/17) stressed further, “The GOP Plan Is the Biggest Tax Increase in American History, by Far.” After noting that the bill includes some $6 trillion in tax reductions, largely for corporations and households with annual incomes above $400,000 (i.e. the 1 Percent), reporter Ryan Grim pointed out:

[The bill] gets referred to as only a $1.5 trillion cut because it raises $4.5 trillion in taxes elsewhere. But the key question is who gets a tax hike and who gets a tax cut. Put simply, the bulk of the tax cut is going toward the rich, while the tax increases go to everybody else.

For most Americans, the GOP “tax cuts” are actually a tax increase. (chart: ITEP)

The Institute on Taxation and Economic Policy, a nonpartisan think tank, reported that, “The lowest-earning three-fifths of Americans would pay more on average in federal taxes, while the top 40 percent on average would receive a tax cut,” with the wealthiest 1 percent of Americans receiving an average cut of more than $9,000.

The Institute added, “The legislation is described as tax reform but would cut hundreds of billions of dollars in healthcare spending.” The AARP similarly warned that the Senate GOP bill would trigger up to $25 billion in cuts to Medicare.

It would also add at least $1 trillion to the US federal deficit, according to Congress’ own Joint Committee on Taxation. The nonpartisan Penn Wharton Budget Model estimate is even higher, at an additional $1.4 trillion in government debt. This will no doubt be used to justify massive cuts in social spending, including Social Security and Medicare, which leading Republicans like House Speaker Paul Ryan and Sen. Marco Rubio are already promising to go after.

In other words, the Republican tax-deal-for-the-1-percent is nothing short of class war: The working class will lose even more of the little wealth that it has, and the capitalist class will reap all the benefits. The legislation even includes a tax break for owners of private jets, along with banks and oil companies.

Many reports did highlight some of these deleterious impacts of the tax plan in the body of the story, but they buried the lead. And the majority of Americans do not read past the headline.

Depicting a Working-Class Disaster as a ‘Victory’ 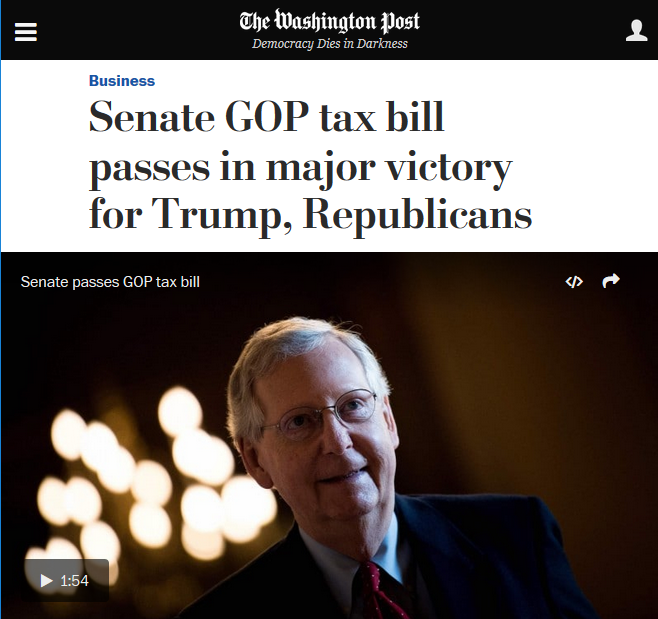 Focusing on the Washington players, not on the real-world consequences (Washington Post, 12/2/17)

Another way corporate media whitewashed the undeniably destructive effects of the Republican tax plan is by portraying it primarily as a “victory” for Trump and the GOP:

It’s striking how little this presentation—from “mainstream” media, supposedly critical of Trump—diverged from that of right-wing outlets that openly support Trump and the GOP, such as Fox News (“Trump Takes Victory Lap After Senate Passes Tax Bill, Calls It ‘Largest Tax Decrease…by Far,’” 12/2/17).

The contradiction was highlighted in a SFGate report (12/2/17) with a headline focused on political gamesmanship—”Senate Narrowly Passes GOP Tax Overhaul Bill in Major Victory for Trump”—but a lead that acknowledged the losses for regular people:

Securing a desperately sought legislative victory for the Trump presidency, the Senate approved a $1.5 trillion tax overhaul Saturday morning that provides massive tax cuts to large corporations and wealthy individuals but could lead to higher tax bills for millions of Californians.

So why not headline the bill’s impact on the vast majority of people? Why showcase the Trump victory angle?

ABC News (12/4/17) likewise exhibited these contradictions within one broadcast. In a segment  titled “Tax Bill Seen as Victory by Trump, GOP,” the host said, “Right now the bill is pretty unpopular,” without explaining why or providing any further information.

“This is a big legislative win, the most significant one for the Trump administration thus far, and this is something to take home to your constituents,” declared ABC analyst Meghan McCain. The daughter of neoconservative Sen. John McCain even referred to the Republican Party as “we.”

It was not until further in the segment that ABC analyst Matthew Dowd noted, “Seventy percent of the benefits of this tax bill go to the very wealthy, the top 1 or 2 percent of the country.” Refuting the title of the segment, Dowd added: 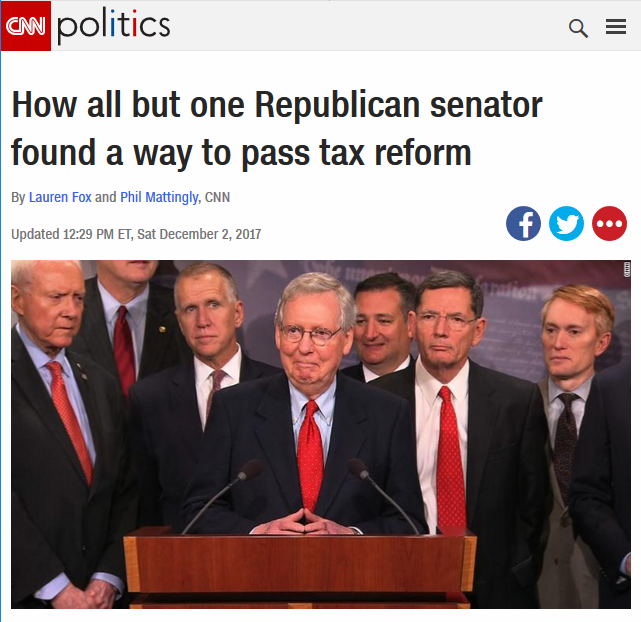 The ubiquitous euphemism “tax reform” was used to put a positive spin on massive giveaways to the wealthy (CNN, 12/2/17).

The ubiquitous term “tax reform” (e.g., CNN, 12/2/17; The Hill, 12/4/17; Politico, 12/5/17; CNBC, 12/5/17) has a misleadingly benevolent connotation—who doesn’t like reform?—so long as media don’t ask who benefits and who is harmed. Likewise other headline language, such as “tax overhaul” or “revision,” that fails to reflect the different impacts of Republicans’ plan:

With euphemisms like “mixed bag” and “mixed blessings,” several outlets seemed to gesture weakly toward the massive assault on working-class Americans. Reuters (12/2/17) reported that the “sweeping tax overhaul” will move “Republicans and President Donald Trump a major step closer to their goal of slashing taxes for businesses and the rich while offering everyday Americans a mixed bag of changes.” The Washington Post (12/2/17) noted the bill “bestows extensive benefits on corporate America and the wealthy while delivering mixed blessings to everybody else.”

That “everybody else” is reduced to a subordinate clause perfectly represents how corporate media’s pretense of “balance” barely veils their reflexive positioning on the side of the rich.