25 April 2018 — RT
“In the world of information warfare, the Russians are on the offensive,” says a new BBC Newsnight report on disinformation, which bares all the hallmarks of a corporation waging an information war of its own.

In fact, the report comes mere days after a BBC presenter suggested live on air that the British state broadcaster was part of information warfare, and people should be tailoring their message accordingly.

Well, Newsnight was back in the props cupboard for this report, in order to sprinkle its now familiar Russian stereotypes throughout. The tropes on show here are Gabriel Gatehouse starting his report with a shot of vodka before later showing off his Russian skills, as well as two separate Russian matryoshka dolls, one with Putin’s face on it. This is the level of discourse at which we’re operating. “We’ve entered a world of confirmation bias,” says Gatehouse unironically at one point, in what could be a description of his own work. 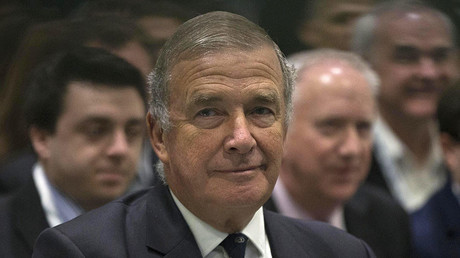 Having clearly framed this BBC report as targeting Moscow, Gatehouse then uses a clip of Russia’s foreign minister talking about an anti-Russian campaign, as if to suggest the very idea was ridiculous.

A few television clips of Tony Blair talking about Iraq from RT, shown at a Russian embassy news conference, is described as “a multi-media presentation on Iraq.” This feeds into a strange quirk found in reports about Russia, that common everyday technology is somehow more sinister if Russians use it.

The report talked a lot about Russian government ‘talking points‘ and how Moscow is using information – not to persuade people, but to confuse them. When you’re reading or watching coverage about Russia, take notice of how often this theory is thrown out and ask yourself, who is really parroting ‘talking points.’ In fact, Gatehouse and analyst Ben Nimmo, who is interviewed, both push forward this theory, using almost exactly the same wording. This is groupthink in action.

Nimmo from the Atlantic Council, formerly of the NATO press office, is then used to make his usual claims about so-called Russian bots, in which he describes how different theories about the alleged Douma chemical attack in Syria started to emerge in Russia, apparently unaware that this is generally how news stories unfold.

Nimmo’s presence is as much of a cliche as a matryoshka doll in these kinds of reports. He later talks about how in Russia there are government departments, diplomats, broadcasters, websites and Twitter users who “all amplify the same messaging.” Well yes, people often share the same views. He doesn’t mention the many millions who don’t.

Don’t think I can watch Newsnight. Especially when they’re doing a segment on propaganda with zero sense of irony or self awareness. #newsnight#BBCBias

The use of Nimmo is interesting, because he is clearly someone pushing an anti-Russia agenda completely lacking in nuance. He has personally labelled Twitter user @ian56789 a ‘Kremlin troll,’ even though the man behind the account is Ian Shilling, who is from England and has no links to the Kremlin. Shilling simply holds what are regarded as non-mainstream views, which are enough to trigger analysts like Nimmo.

Newsnight includes Shilling in its report, but does not mention that Nimmo has refused to back down on his claims that the very real and independently minded Englishman is a “Kremlin troll,” perhaps because that would undermine the neutrality of the expert the BBC report is hanging on.

Following the main report, there is a debate with Alastair Campbell and Peter Pomerantsev. The former was Tony Blair’s spin doctor, who is forever linked to the so-called ‘dodgy dossier’ that took Britain to war in Iraq based on a lie; the latter is a writer who appears to be making a living out of making claims against the Russian media, so has no obvious motive to undermine the negative narrative.

This Newsnight Propaganda/Fake News wheeze gets better! They have Alistair Campbell on, the champion of the dodgy dossier! Fuck me! If you wanted to see the clearest example of delusional media groupthink, you wouldn’t do better than this! #Newsnight#FakeNews

Campbell accused Russians, Trump and Brexiteers of using lies to achieve their political aims, which some might describe as a bit rich.

When presenter Evan Davis asked Campbell the question that was screaming to be asked: “… did you create a hostile environment to truth, over many, many years…?”

Campbell said: “I really don’t think so, no…”

Davis: “Did you ever tell a direct lie to the media?”

That was pretty much as tough as it got for the man who drove the march to war over weapons of mass destruction that didn’t exist. Pomerantsev said it was “bracing” to be in Britain to see “the journalist interrogating the former political operative in such a great way.” He must have been watching a different debate to people at home.

So according to Evan Davis on Newsnight, if people want the facts they should stick with The Guardian and the BBC. The poor bugger probably believes that as well. Then they brought on Alistair Campbell. You would have to have a heart of stone not to laugh.

Presenter Evan Davis then started a question in such a way that suggests the mainstream media has absolutely no idea why people are flocking to alternative sources of information. In what reeks of a certain smug self-delusion, Davis said: “If anyone wants the truth, you can watch the BBC, read The Guardian, read The Telegraph, The Times, and you will know what you’re getting.” Yep, he said it.

In the summing up of his report, Gatehouse uses the line: “Here’s what the new propagandists of the 21st century have realized…” Newsnight’s reports suggest the BBC should be more concerned about what the old propagandists haven’t realized.