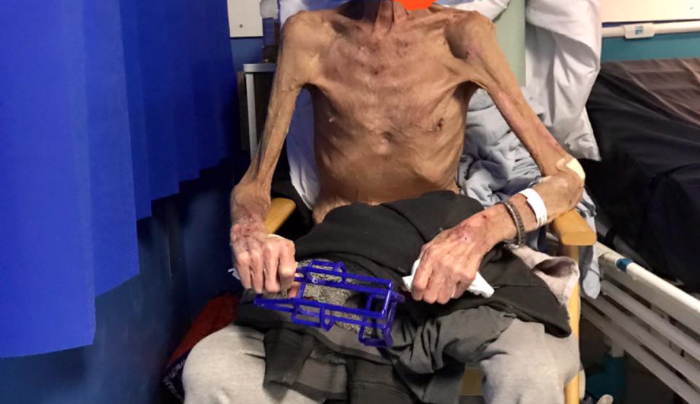 TruePublica Editor: I need not comment on the following social media post that was published on Christmas Eve. Tom Pride from Pride’s Purge asks the question: Which war-torn city in a third-world country was this man starving to death in? The answer – Birkenhead, England, Christmas Eve, 2018.

This is the type of Britain we have become today – utterly heartless, lacking compassion and decency.

It was only two years ago that grovelling bosses from the heavily-criticised outsourcing giant were hauled before MPs to explain missed targets for carrying out vital assessments and deliberately denying vital benefits to some of the most vulnerable in society.

Last October was the tenth anniversary of the adoption of the Work Capability Assessment (WCA) by the Department for Work and Pensions (DWP), as used by successive UK governments to restrict access to the long-term sickness and disability benefit known as the Employment and Support Allowance (ESA). Read our report published last July related to this article entitled: Killed by the State

Terry Craven is an Employment Law Advisor. This is from a Facebook post published on the 24th December that has had over 1,200 shares. I’ve checked it out and it appears to be completely legitimate.

“Please spare a thought for this 64-year-old severely disabled client of mine? Please share this post to see if we can garner a response from the Tories although, I doubt we will.

My client was thrown off ESA by ATOS 18 months ago. Since then, he has been expected to sign on. Obviously, he’s been sanctioned and forced to go hungry. So much so he weighs 6 stone. On Friday, not surprisingly he was at death’s door with pneumonia. Fortunately, I was able to get him into a hospital. Evidently, his left lung was full of fluid with his right not much better, he’s now on the mend.

He has been unable to heat or look after his home properly because his health has deteriorated which I suggest is obvious from the photographs. He lives in one room of his 3 bedroom house he rents from a private landlord. It is rat infested, he cannot use the toilet nor is he strong enough to put water in a kettle. He relies on bottled water. I am making efforts to have him rehoused in sheltered accommodation.

However, I think he may have to go into a nursing/residential home in the interim.

Birkenhead Benefits Centre has ignored my continuous pleas for help, the heartless bastards!

Well here’s wishing Maggie May, IDS, Esther McVey a very merry Christmas and Happy New Year. The one thing, which is certain is my client will not have one thanks to their evil, Dickensian policies. I hope they all rot in hell for the sickness, death and hunger the Tories have heaped on disabled people since 2010. My Christmas wish is for a general election and a Corbin/McDonald Government.”

In the image below, this gentleman’s weight is 42.4 kilos/6.6 stone. In the background an NHS nurse. 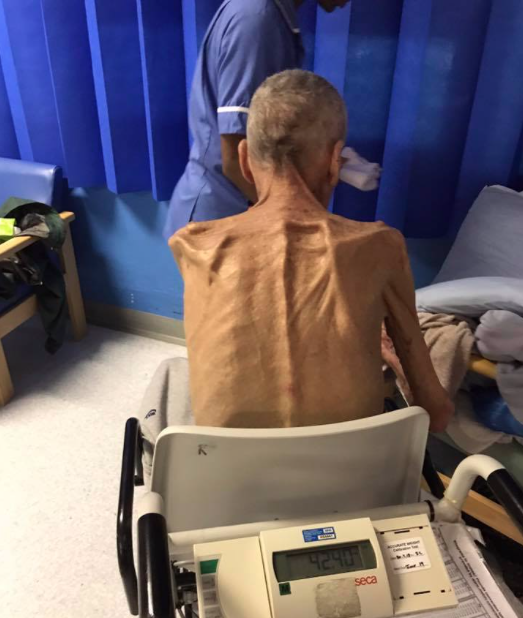