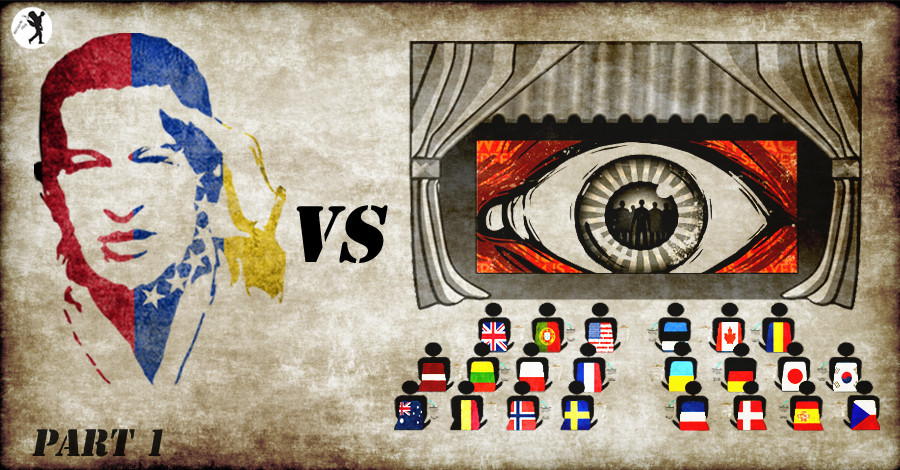 Apparently, most of Western sheep-like humans are buying all the imperial propaganda against Venezuela.

And the rest of Western human beings, the minority, they seem to have a lot of doubts about what’s going on in Venezuela, as if they were living in a Stone Age era without instant access to a titanic amount of information provided by an enormous variety of sources available on something called… the Internet.

What kind of neuronal short-circuit hit most Western minds to make them swallow absurd and nonsensical lies like the ones we’ve witnessed lately. It seems that there are millions of Europeans out there living in a world where people in Brussels force them to choose between kind austerity and brutal austerity, and – what a hell, those Europeans still believe they live in “democracy”!

And, if by any chance, the Portuguese people dare to complain about their metaphoric charred sphincters, the non-elected “democrats” in Brussels will immediately order their puppets in Lisbon to shut them up, making them be sure that everything is decided “democratically”, according to the illegal and non-voted European Constitution which unconstitutionally has the “right” to pass over the raped Portuguese constitution.

Then, imagine this: Portuguese people enlightened by plenty of televised Western electromagnetic waves that, combined, burn both their eyes and their brains, making them believe Venezuela is a “dictatorship” and Maduro is a “dictator”.

Well, first of all, it seems that Portuguese (and other Western) sheep-like humans have lost the ability to read, because there’s no shortage of good and free dictionaries in Portuguese language.In a dictatorship, there must be someone dictating without asking and without having been elected.

But Maduro was elected!

And the Venezuelan elections, for many years, have been the ones welcoming the highest numbers of accredited international observers (including imperialist Europeans and imperialist Yankees). And none of them have ever found a serious fault or problem during any Venezuelan election. Facts are facts, and can easily be checked online.

The last presidential elections took place more than half a year ago and, until January 2019, theWestern sheep-like humans had nothing to say about it, since they never have a f*****g idea of what goes on in Venezuela, except when Western Lying Media tell them to believe they “know” something or to be “concerned” about something.

They don’t know and never wished to know that the opposition coalition (clearly funded by the EU and the US, in an obvious and criminal example of interference of that very same kind the pathetic West falsely accuses Russia of carrying out in the US and Europe), in 2017, was betting that Maduro would not let presidential elections take place in 2018.

They do not know that this coalition even wanted to anticipate the elections, believing that they could easily win.

They do not know that the opposition coalition lost face when, with a majority in the parliament (by the way, since when, in a dictatorship, the parliament can be controlled by the opposition?), they passed an amnesty law in which we can find an official admission of their past crimes. AsKevin Zeese and Margaret Flowers rightly pointed out:

In 2016, the economic crisis led to the opposition winning a majority in the National Assembly. One of their first acts was to pass an amnesty law. The law described 17 years of crimes including violent felonies and terrorism committed by the opposition. It was an admission of crimes back to the 2002 coup and through 2016. The law demonstrated violent treason against Venezuela. One month later, the Supreme Court of Venezuela ruled the amnesty law was unconstitutional. US media, regime change advocates and anti-Venezuela human rights groups attacked the Supreme Court decision, showing their alliance with the admitted criminals.

Years of violent protests and regime change attempts, and then admitting their crimes in an amnesty bill, have caused those opposed to the Bolivarian Revolution to lose power and become unpopular. In three recent elections Maduro’s party won regional, local and the Constituent Assembly elections.

They do not know that, after having miserably failed in their anti-democratic attempts to sabotage the 2017 constitutional revision convened by Maduro, the opposition coalition completely broke down. Some of the member parties of the coalition did not want to further damage their public image, knowing that sabotaging an election and a referendum are precisely the kind of actions one should avoid when trying to improve its own public image.

They do not know that, after the opposition coalition broke down, all these opposition parties were sure they would never have a chance to win presidential elections running separately and, as a result, most of them decided not to participate. But yes, the elections were held in 2018, as planned, proving Venezuela is a democracy.

They do not know that most opposition parties voluntarily boycotted the elections and, therefore, they have no right to complain about the results.

They do not know that the Venezuelan opposition does not even complain about the electoral procedure. The opposition did not complain now nor complained at the time (May 2018). What we have is Guaidó and is US-sponsored gang “arguing” that the elections were “illegitimate” because they were called by a Constituent Assembly (convened by Maduro) and not by the National Assembly (Parliament of Venezuela) – what a nonsense, and ridiculously complaining that some convicted criminals (like Leopoldo López or Henrique Capriles) were prevented from participating in those elections – what a nonsense too.

Just read the Venezuelan constitution (democratically approved by the Venezuelan people) and confirm by yourself that nothing went wrong with the presidential elections.

Second, as provided by the country’s Constitution, logically, when a constituent assembly is formed (to revise the current Constitution), the parliament is temporarily closed, as it cannot possibly legislate using a core set of laws in process of revision.

Third, Maduro calling for new elections proves that he respects the Venezuelan Constitution and the democratic institutions. If he hadn’t called it, then he could be labeled as a dictator fearing electoral defeats, and trying to undemocratically remain in power.

So, dear westerners, please tell me what kind of nonsenses do you propose to object the last presidential elections? Nothing, of course. And worse, even though no one in the oppositioncomplains about the results (Maduro 67.8%, Falcón (20.9%), Bertucci 10.8%), apparently (from what I read online) most westerners really believe that this is what the opposition actually complains about. Wrong. So wrong. So painfully wrong.

Westerners, poisoned with pathetic and foolish ignorance, show empathy towards theopposition for what it hasn’t even said!

Moreover, contrary to the obscure and almost superstitious Western beliefs, Venezuela is far more democratic than most Western countries. Since the 1999 Bolivarian Revolution, more than 20 elections have been held. The ruling party and its leaders won almost all of them, and democratically respected the ones they lost. And, if they have lost a few,  it means they have democracy, don’t they?

In the middle of this criminal and genocidal economic war the vile West has been inflicting on the non-submissive Venezuela, a considerable part of its population bought the Western “regime change” propaganda (just like what happened in Allende’s Chile, Mossaddegh’s Iran, Goulart’s Brazil or in Cuba over the last dozens of years: the Machiavellian U.S. admittedly attacking the economy of a country to turn its people against their rulers) and, worse, they elected a opposition coalition to run the parliament!

What kind of “dictatorship” allows the opposition to rule over the parliament? What kind of “dictator” does not have wonderful ideas such as killing and torturing tens of thousands of civilians like Pinochet did in Chile, or bombing the parliament like Yeltsin did in Russia, or committing a genocide, killing millions, like Sukarno did in Indonesia?

No, the strange “dictator” Maduro did nothing similar. Moreover, Maduro took an astonishing and democratic decision and respected the people’s vote! And now what dear Western sheep-like humans? Are you sure you still want to call Maduro a “dictator”?

More, on December 2, 2007, Hugo Chávez’s government was defeated in its proposal of a constitutional revision in which the Venezuelan people was invited to decide whether they wanted or not a limit of two consecutive terms (in the case of Germany’s eternal Merkel, there’s no limit). At that time, the manipulative and deceitful Western media accused Chávez of being a dictator willing to perpetuate himself in power. What a joke! Chávez’s proposal didn’t pass but, obviously, Chavéz and his party respected the people’s will… and life went on!

Nevertheless, it is very common to hear westerners saying they don’t know anything about what is happening and that they are too confused! Of course they are, what were they expecting?

They self-inflict a total 24/7 censorship on all the freely available facts… and then they are surprised by the fact that they can’t understand what is going on in Venezuela?

And then, to fix it, they self-inject propaganda coming from the very same media that always lie about everything?

Confused? Doubtful? Oh, come on, give me a break! I bet your real problem is self-inflicted and desired retardedness, as well as cognitive dissonance. But sure, I might be wrong. Please, just prove me wrong!

Moreover, Venezuela is surely more democratic than Europe, as we can see from certain democratic options they have and we have not. In Venezuela, it’s possibly to put an end to a democratically elected government if enough signatures are collected.

I bet you will say that, if the necessary signatures were collected, the regime would not resign! Wrong again.

In 2004, when Chávez was president and, despite the fact that many of the signatures collected were not valid (10 times the same ID number, signatures of deceased people, etc.), the recall referendum went on and… Chavéz won again.

Chávez got an even greater result, showing that his honesty and respect for the democratic institutions (which he helped establish) were rewarded with a greater and firmer turnout by his supporters!

Meanwhile, in the United States, to become president, one must be a billionaire or a professional streetwalker… what a nice “democracy”!

Luis Garcia is a self-made independent writer and traveler, focused on Syria and Venezuela. He also writes about Latin America and the Middle East, and about the propaganda machine of what he calls Western Economic Dictatorship. His articles can be read in English here, in French here and in Portuguese here. Luis Garcia traveled in 55 countries and lived in 10 of them, currently living in Thailand where he works as a teacher. He is also an amateur photographer, with his best photos published here. Please support his work at his Patreon account.

One thought on “Venezuela: Westerners have lost the ability to reason! (PART 1) by Luis Garcia”