When previously unknown Venezuelan opposition politician Juan Guaidó stood up in an East Caracas plaza and declared himself “interim president” of the South American country, Western corporate media were ebullient.

In those heady early days, corporate journalists could scarcely conceal their love affair with the 35-year-old politician, whom they likened to Barack Obama (CNN, 2/7/19) and described as a “freedom fighter” (Fox Business, 1/29/19) and Venezuela’s “only democratically elected figure” (MSNBC, 1/24/19), who had “captured the heart of the nation” (New York Times, 3/4/19).

Nearly six months later, with Guaidó no closer to ousting Venezuela’s elected president, Nicolás Maduro, from Miraflores Presidential Palace, the enthusiasm has dampened. Now that the honeymoon is over, it would appear that corporate journalists have been compelled to reckon with some uncomfortable truths about Guaidó, US sanctions and the coup they had been vigorously endorsing. 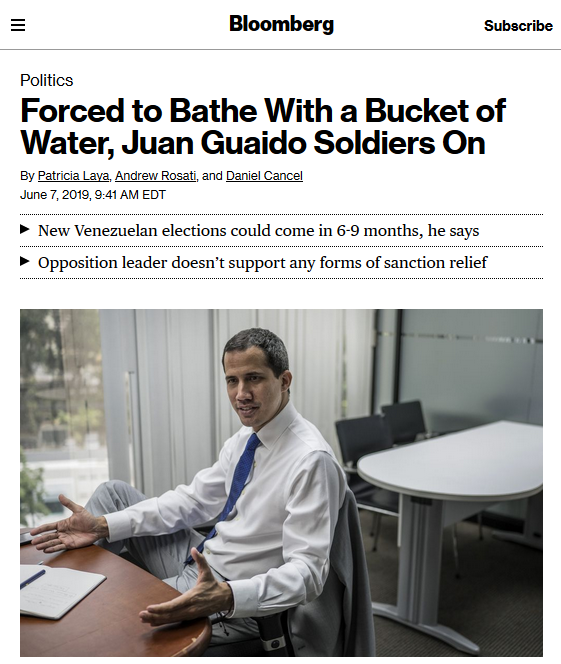 What’s worse than having to bathe with a bucket? Being demoted by Western media from “interim president” to “opposition leader” (Bloomberg, 6/7/19).

“Disappointed Venezuelans Lose Patience With Guaidó,” writes Reuters (7/1/19), in what might be read as a projection of its journalists’ own frustration with Washington’s failing coup.

After Guaidó’s self-proclamation in January, the corporate outlet (1/23/19) gushingly described him as a “salsa-loving baseball fan,” who posed “the boldest challenge to socialist President Nicolas Maduro’s rule in years.”

Similarly, the CBC in January (1/23/19) labeled hard-right Popular Will party leader Guaidó a long-time “activist” at the head of a “centrist social-democratic party.”  Most recently, the state network (6/29/19) declared that the opposition leader, depicted in a gloomy headshot, “has few cards to play—and not long to play them.”

There is no clearer indication of the Western media’s growing disillusionment than the gradual demotion of Guaidó from “interim president” to “National Assembly president” or “opposition leader.” For example, ABC News was referring to Guaidó as “interim president” (often without the “self-proclaimed” prefix) as recently as May (5/3/19, 5/5/19). Fast forward two months, and the title is just “opposition leader” (6/26/19, 7/5/19).

In yet another sign that the US-backed coup is running on empty, corporate journalists’ triumphalist tone that followed Guaidó’s self-proclamation has given way to reports that he “remains defiant” (CNBC, 5/2/19), “soldiers on” (Bloomberg, 6/7/19) or is “under pressure” (Telegraph, 6/19/19).

The growing doubts from the media establishment mirror those in DC, with rumors circulating that Trump is “losing patience and interest” in Venezuela (Washington Post, 6/19/19). Having gone all in on a horse falling rapidly behind in the regime-change race, Secretary of State Mike Pompeo and “special representative” Elliott Abrams are now forced to take turns publicly reiterating US support for Guaidó.

The opposition leader’s fading luster has not been helped by a corruption scandal that accused his appointed envoys to Colombia of embezzling “humanitarian aid” money. The story was unveiled by the Miami-based and rabidly anti-government outlet PanamPost(6/18/19), and was too big to ignore. All the media could do was try to spin it as “Guaidó Calls for Probe” (Reuters, 6/15/19), but the damage was done. 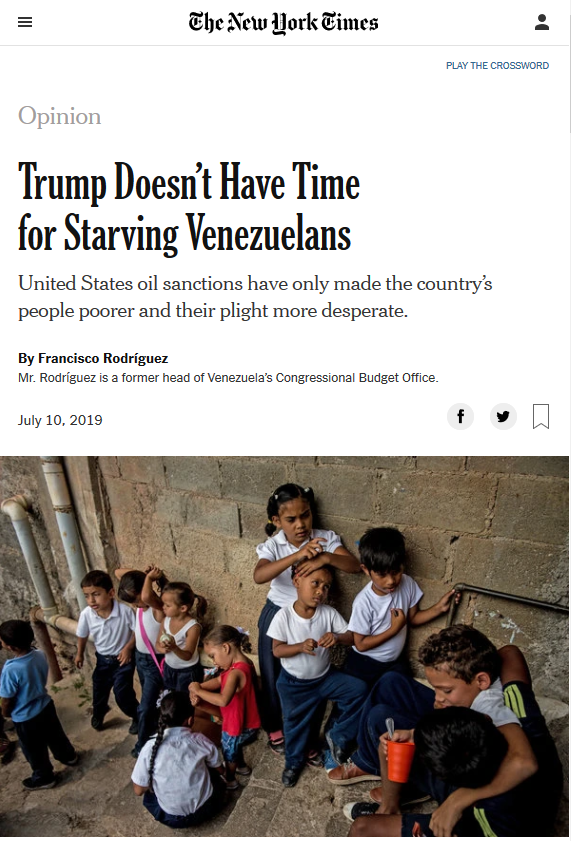 That Washington’s policies are causing starvation is a crucial thing for US citizens to know, but it’s information that’s mostly confined to opinion pieces like this one in the New York Times (7/10/19).

Guaidó’s failing coup has even led to a few cracks in the refusal of corporate outlets to acknowledge the devastating humanitarian toll of US sanctions on Venezuela since 2017, which were escalated in January when the Trump administration imposed an oil embargo, cutting the country off from its No. 1 cash buyer.

As Joe Emersberger reported for FAIR (6/14/19), on June 9 Reuters finally mentioned a study by economists Mark Weisbrot and Jeffrey Sachs that found US sanctions responsible for as many as 40,000 Venezuelan deaths in 2017–18.

Reuters had buried the report for over a month, and has since reverted to its standard practice of framing the humanitarian impact of US sanctions as a mere allegation by the Maduro administration.

A few exceptions notwithstanding (Financial Times, 7/7/19; Independent, 7/7/19, 4/26/19), the corporate press has all but suppressed the Weisbrot/Sachs report (FAIR.org, 6/26/19), with most outlets portraying Venezuela’s economic destruction as a condition preceding US sanctions, imposed first under Obama in 2014–15 and ratcheted up by Trump in 2017.

The New York Times (7/6/19) elevates this mystification into an art form, presenting the collapse of Venezuelan agriculture, largely due to sanctions-induced fuel shortages, as the culmination of “six years of economic crisis under President Nicolás Maduro, whose policies of price controls, expropriations and state-sanctioned embezzlement have wiped out the country’s private sector”—which sanctions have merely “worsened.”  Even more remarkably, the paper of record published an article (5/17/19) interviewing economists on the scale of Venezuela’s crisis that managed to avoid quoting any anti-government economists critical of sanctions, such as Francisco Rodriguez, let alone mentioning the Weisbrot/Sachs study.

However, only in the Times op-ed by economist Francisco Rodriguez (7/10/19) does the public encounter an acknowledgement of the 2017 sanctions’ role in Venezuela’s current economic devastation. In other cases, corporate journalists continue to deny or downplay the existence of broad-ranging US economic sanctions all-together, pretending they only affect government officials.

The Guardian (5/21/19) went the farthest, referring to coercive US measures that have hit multiple sectors of the Venezuelan economy and resulted in thousands of deaths as “financial sanctions on Venezuela’s president.” 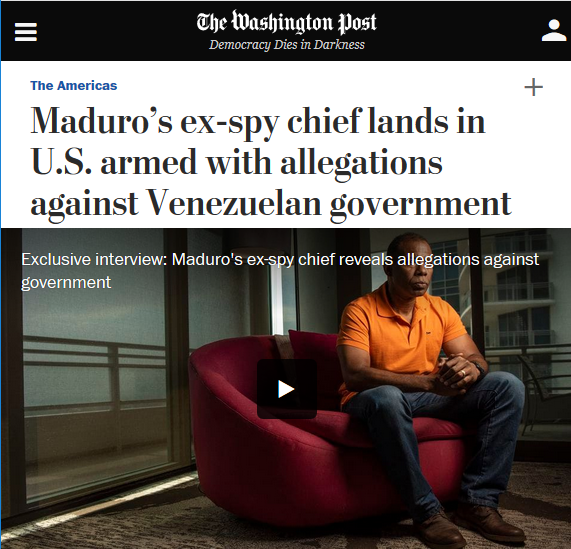 The Washington Post (6/24/19) unskeptically relays the claims of a Venezuelan defector.

In an exclusive interview, the Washington Post (6/24/19) glowingly described Figuera as “a muscular 55-year-old [who] was one of the revolution’s true believers.” Despite defecting from his country to collaborate with a hostile foreign power, the ex-top spy is heralded as a source of indisputable veracity, whose unsubstantiated claims about Cuban capture of Venezuelan politics (FAIR.org, 3/26/19) or Hezbollah activity in the country (FAIR.org, 5/24/19) are to be taken at face value.

As in the case of former intelligence czar Hugo “El Pollo” Carvajal (New York Times, 2/21/19), currently facing extradition to the US on drug charges, no effort is made to interrogate defectors’ incentives to fabricate “information” that just happens to legitimate Washington’s casus belli. The ultimate goal is not to prove any nefarious activity, which is highly implausible, but to provide moral justification for regime-change efforts.

In its quest for new anti-Maduro stalwarts, the corporate press does not draw the line at rehabilitating rogue spies “accused of arbitrary detentions and torture.” In a remarkable feat of historical revisionism, AP’s Joshua Goodman (6/25/19) exalts the “bravery” of former Caracas security chief Ivan Simonovis, who escaped house arrest and fled to the US last month.

Simonovis had been handed a 30-year sentence in 2009 for the death of two people when snipers opened fire at the Llaguno Bridge on April 11, 2002. A total of 19 pro- and anti-government demonstrators were killed in a massacre that Goodman falsely terms a “gunfight,” setting the stage for a coup that temporarily ousted President Hugo Chávez.

Goodman ignores that “supercop” Simonovis’ Metropolitan Police was notorious for its brutality, with even former chief Jhonny Campos casting doubt on the force’s human rights record.

“Venezuela’s Metropolitan Police was, without a doubt, the security force most reviled by the poorest members of society,” observes George Ciccariello-Maher, an expert on Venezuelan popular movements:

Associated with political repression, drug dealing, kidnapping and rape, the Metropolitan Police was so loathed that residents of working-class barrios often demanded the army be sent in to replace them.

Western media’s newfound doubts about Guaidó and reluctant admissions of the deadly effects of sanctions are not a case of journalistic standards starting to take over. Rather, this cognitive dissonance reflects the utter disorientation that has come to characterize Guaidó and his US handlers’ operation. The end result is journalists, attempting to stay the US regime-change course tainted by Guaidó’s serial failures, laundering the reputations of the foulest of anti-government figures in the process.