The Trump administration has given various justification for its assassination of Major General Qassem Soleimani and commander Abu Mahdi al Muhandis. It claimed that there was an ‘imminent threat’ of an incident, even while not knowing what, where or when it would happen, that made the assassination necessary. Trump later said the thread was a planned bombing of four U.S. embassies. His defense secretary denied that.

Soleimani and Muhandis during a battle against ISIS 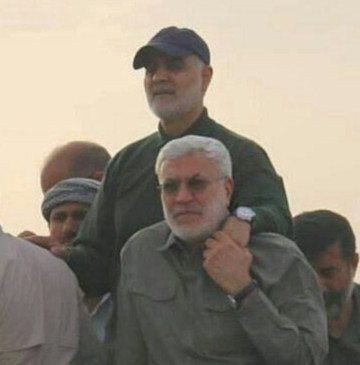 That has raised the suspicion that the decision to kill Soleimani had little to do with current events but was a long planned operation. NBC News now reports that this is exactly the case:

President Donald Trump authorized the killing of Iranian Maj. Gen. Qassem Soleimani seven months ago if Iran’s increased aggression resulted in the death of an American, according to five current and former senior administration officials.

The presidential directive in June came with the condition that Trump would have final signoff on any specific operation to kill Soleimani, officials said.

The idea to kill Soleimani, a regular General in an army with which the U.S. is not war, came like many other bad ideas from John Bolton.

After Iran shot down a U.S. drone in June, John Bolton, Trump’s national security adviser at the time, urged Trump to retaliate by signing off on an operation to kill Soleimani, officials said. Secretary of State Mike Pompeo also wanted Trump to authorize the assassination, officials said.

But Trump rejected the idea, saying he’d take that step only if Iran crossed his red line: killing an American. The president’s message was “that’s only on the table if they hit Americans,” according to a person briefed on the discussion.

Then unknown forces fired 30 short range missiles into a U.S. base near Kirkuk. The salvo was not intended to kill or wound anyone:

The rockets landed in a place and at a time when American and Iraqi personnel normally were not there and it was only by unlucky chance that Mr. Hamid was killed, American officials said.

Without presenting any evidence the U.S. accused Katib Hizbullah, an Iraqi Popular Militia Unit, of having launched the missiles. It launched airstrikes against a number of Katib Hizbullah positions near the Syrian border, hundreds of miles away from Kirkuk, and killed over 30 Iraqi security forces.

This led to demonstrations in Baghdad during which a crowd breached the outer wall of the U.S. embassy but soon retreated. Trump, who had attacked Hillary Clinton over the raid on the consulate/CIA station in Benghazi, did not want to get embarrassed with a full embassy breach.

The media claim that it was the embassy breach that the led to the activation of an operation that had already been planned for a year before Trump signed off on it seven month ago. As the New York Times describes it:

For the past 18 months, officials said, there had been discussions about whether to target General Suleimani. Figuring that it would be too difficult to hit him in Iran, officials contemplated going after him during one of his frequent visits to Syria or Iraq and focused on developing agents in seven different entities to report on his movements — the Syrian Army, the Quds Force in Damascus, Hezbollah in Damascus, the Damascus and Baghdad airports and the Kataib Hezbollah and Popular Mobilization forces in Iraq.

It was the embassy breach and a war-industry lobbyist who convinced Trump to finally pull the symbolical trigger:

Defense Secretary Mark Esper presented a series of response options to the president two weeks ago, including killing Soleimani. Esper presented the pros and cons of such an operation but made it clear that he was in favor of taking out Soleimani, officials said.

Trump signed off and it further developed from there.

There was no intelligence of any ‘imminent threat’ or anything like that.

This was an operation that had been worked on for 18 month. Trump signed off on it more than half a year ago. Those who had planned it just waited for a chance to execute it.

We can not even be sure that the embassy bombing had caused Trump to give the final go. It might have been that the CIA and Pentagon were just waiting for a chance to kill Soleimani and Muhandis, the leader of Katib Hizbullah, at the same time. Their meeting at Baghdad airport was not secret and provided the convenient opportunity they had been waiting for.

Together Soleimani and Muhandis were the glue that kept the many Shia factions in Iraq together. The armed ones as well as the political ones. Soleimani’s replacement as Quds brigade leader, Brigadier General Ismail Qaani, is certainly a capable man. But his previous field of work was mainly east of Iran in Afghanistan and Pakistan and it will be difficult for him to fill Soleimani’s role in Iraq:

The question is how the successor of Soleimani will manage his new responsibility including the thorny issues in Iraq. The escalation of the Iranian-American conflict is, according to many, an escalation towards war and the destabilization of the region in which the rules of engagement have changed. The question remains how, and not whether all of this will impact the situation in Iraq.

Today the Iraqi cleric Muqtada al-Sadr, who has his on militia, and Iraqi PMU leaders met in Qom, Iran, to discuss how the foreign troops can be expelled from Iraq. Gen. Qaani will likely be there to give them advice.

Yesterday Hassan Nasrallah, the leader of the Lebanese Hizbullah, gave another speech. In it he called on the Kurds in Iraq to pay back their debt to Soleimani and Hizbullah, which is owned for their fight against ISIS, and to help to evict the foreign soldiers from Iraq:

85-Nasrallah: Now, the rest of the path. 1) Iraq: Iraq is the first country concerned w/responding to this crime, because it happened in Iraq, and because it targeted Abu Mahdi al-Muhandis, a great Iraqi commander, and because Soleimani defended Iraq.

86-Nasrallah: I ask Masoud Barazani to thank Soleimani for his efforts in defending Erbil and Kurdistan Region, because Soleimani was the only one to respond to your call. Soleimani and with him men from Hezbollah went to Erbil.

87-Nasrallah: Barazani was shaking from fear, but Soleimani and the brothers from Hezbollah helped you repulse this unprecedented threat; and now you must repay this good by being part of the effort to expel the Americans from Iraq and the region.

The Barzani family, which governs the Kurdish part of Iraq, has since long sold out to the Zionists and the United States. It will certainly not support the resistance effort. But Nasrallah’s request is highly embarrassing to the clan and to Masoud Barzani personally.

So far I only found this rather confusing response from him:

As military leader both Soleimani and Muhandis are certainly replaceable. The militia groups they created and led will continue to function.

But both men also played important political roles in Iraq and it will take some time to find adequate people to replace them in that. That makes it likely that the already simmering political situation in Iraq will soon boil over as the Shia factions will start to fight each other over the selection of a new Prime Minister and government.

The U.S. will welcome that as it will try do install a candidate that will reject the Iraqi parliament decision to remove the foreign forces from Iraqi grounds.

One thought on “The Long Planned U.S. Assassinations In Iraq Will Increase Its Political Chaos”