When Will The Winter Come to An End?: The Fourth Newsletter (2020)

On 17 January, Iran’s Supreme Leader, Ayatollah Ali Khamenei, led the Friday prayers for the first time in eight years. He mocked the ‘American clowns’ who threatened Iran and said that Iran’s response to the US assassination of Major General Qassem Soleimani was a ‘slap in the face’ of US power. Tensions between Washington, DC, and Tehran seem to have gone from a boil to a simmer, but they nonetheless remain. There is reason to believe that US President Donald Trump – reckless by nature – will launch an attack on Iran in the next few months. He might do so to distract from the impeachment trial he faces in the US Senate or to hasten his chances of re-election in November 2020.

In 2015, Iran, China, France, Germany, the United Kingdom, and the United States signed the Joint Comprehensive Plan of Action (JCPOA), the nuclear deal that seemed to stop the imperialist rush to war against Iran. At that time, Iranians took to the streets and to twitter to say, ‘winter is over’.

They quoted from an old protest song – Sar Umad Zemestoon, or ‘Winter Has Come to An End’. The song is based on the Armenian love song Sari Siroun Yar and was then re-written in the early 1970s by Saeed Soltanpour, a Marxist radical of the Cherikha-ye-Fadaee Khalq (People’s Devoted Guerrilla). When Iranians take to the streets in anticipation of a new period, this song seems to follow them: it was sung on the streets during the Iranian Revolution of 1979 and it was sung at campaign rallies of the Green Movement in 2009. It became the catchphrase for a new beginning in 2015. But winter never really ended.

On 25 January 2020, there will be a World Day of Action Against War in Iran and Iraq; this action will build on the over two hundred demonstrations held in the United States on 8 January against a US-led war on Iran. 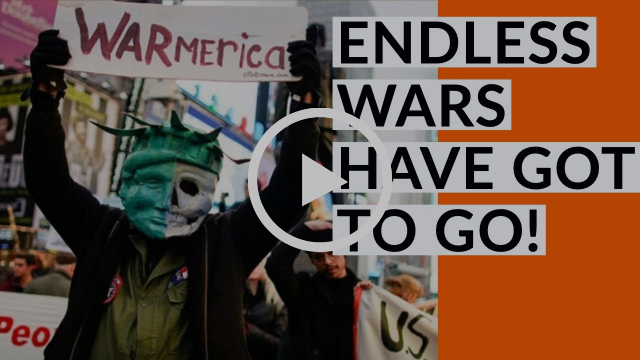 The remainder of this Newsletter is available as Red Alert #5 Iran, which can be downloaded as a PDF here (html here). For a fuller understanding of events in Iran, please see our Dossier no. 19 (August 2019) Iranians Will Never Forget: The Hybrid War Against Iran. 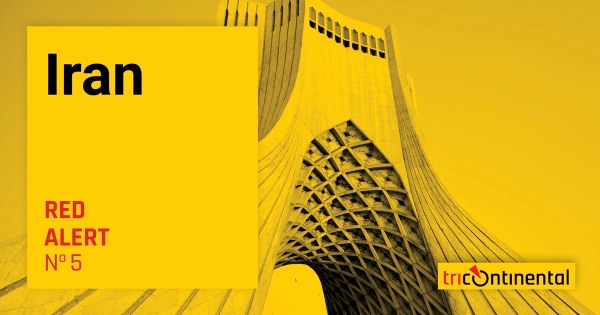 Why does the United States despise Iran so fiercely?

No such hatred marked US relations with Iran during the reign of the Shah (1941-1979). Only when an economic nationalist – Mohammed Mosaddeq – came to power between 1951 and 1953 and only when he threatened to nationalize Iran’s oil industry, did the CIA, the Shah, and the right-wing of the Iranian army – led by General Fazlollah Zahedi – move against him. But even then, they saw the communists as the threat and not the Iranian people. During that period, the Saudi kings and the Iranian Shah made common cause against popular movements and the communists; no Shia-Sunni divide bothered them.

What rankled the United States, the Saudis, and the Gulf Arabs was an upsurge in the region in the late 1970s that included a revolution in Afghanistan (1978) and a revolution in Iran (1979), as well as the takeover of the US embassy in Islamabad, Pakistan (1979) and the takeover of Saudi Arabia’s main mosque (1979). It was the emergence of anti-monarchical – often communist – currents that bothered the US and the Saudis. These currents had to be destroyed.

That is why the West and the Gulf Arabs paid Saddam Hussein to launch an attack on Iran in September 1980. The Iraq-Iran war, which deeply impacted Iran, lasted till 1988. During the war, the Friday prayers in Tehran were often led by Iran’s Supreme Leader Ali Khamenei. At the Friday prayer on 17 January 2020, Khamenei referred to that war with great bitterness. He asked his fellow Iranians how they could possibly trust the West after it was these countries (Germany, France, the UK, and the US) that had provided Saddam Hussein with funds and supplies for his weapons of mass destruction.

During the war, Khamenei’s senior, Ayatollah Khomeini, told his minister Mohsen Rafighdoost that it is forbidden for Iran to produce mustard gas and to even talk about nuclear weapons. ‘If we produce chemical weapons’, Khomeini asked Rafighdoost, ‘what is the difference between me and Saddam?’ In October 2003, Ali Khamenei repeated Khomeini’s words as a fatwa (injunction) against weapons of mass destruction. Ali Khamenei has said many times that it was not the West that has stopped Iran from developing nuclear weapons, but it was Iran itself that declined to develop them on religious grounds.

The question of Iran’s nuclear agenda was not the main point; the main point was to subordinate Iran, to defang it, and to make it irrelevant in West Asia.

Newsha Tavakolian, Again me standing in the cold, alone, 2010. How has Iran defended itself from the hybrid war?

Between 2001 and 2003, the US fought two wars against Iran’s adversaries – the Taliban and Saddam Hussein. Their defeat allowed Iran to spread its wings across the region. Recognising the strategic error of these wars, the US then proceeded sharply to return Iran to its borders. It tried to weaken the link between Iran and Syria through the 2005 Syria Accountability Act (and the war on Syria from 2011), and it tried to destroy the Lebanese political force Hezbollah through the 2006 Israeli attack on Lebanon. Neither worked. In 2006, the US fabricated a crisis over Iran’s nuclear energy programme; it engineered sanctions against Iran’s economy by the UN, the European Union, and the US. This too did not work, and so in 2015 the US agreed to a nuclear deal (which Trump has now rejected). Is this the end of the winter, they sang in Iran? But it was not. The hybrid war continued. 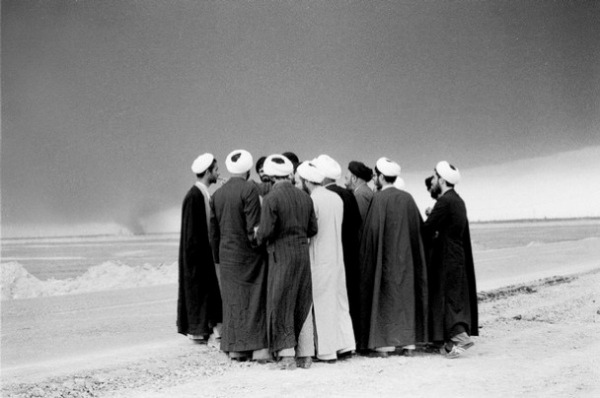 Kaveh Golestan, Mullahs at the front near Abadan, Iraq-Iran War, 1983.

In 1980, the Iranians had created the Quds Force – Quds being the Arabic name for Jerusalem. The point of this Force was to develop regional linkages for a beleaguered Iran. In its early years, the Quds Force participated in operations both against Western interests and against the regional Left (including attacks on the Afghan communist government of Mohammad Najibullah). But in the past decade, under the leadership of Major General Qassem Soleimani and other veterans of the Iraq-Iran war, the Quds Force developed a more precise agenda.

Iran’s leadership has known that it cannot withstand a full attack by the United States and its allies; the barrage of US cruise missiles and bombs pose an existential threat to Iran. This kind of war has to be avoided. Unlike North Korea, Iran has neither a nuclear shield nor the potential or desire to build one; however, the examples of Iraq and Libya, which gave up their weapons of mass destruction shield, show what can be done to countries that have no nuclear deterrent. Neither Iraq nor Libya threatened the West, and yet both countries were destroyed. It was the Quds Force that developed a partial deterrent against a Western attack on Iran. Soleimani’s Quds Force went from Lebanon to Afghanistan to build relations with pro-Iranian groups and to encourage and support them in building up militia groups. The war on Syria was a testing ground for these groups. These groups are prepared to strike at US targets if Iran is attacked in any way. After the assassination of Soleimani, the Iranians said that if they were attacked further, they would destroy Dubai (United Arab Emirates) and Haifa (Israel). Iranian short-range missiles can hit Dubai; but it is Hezbollah that will strike Haifa. That means that the United States and its allies will face a full-scale regional guerrilla war if there is any bombing run on Iran. These militias are the deterrent for Iran. That is why Trump hesitated; but he might not hesitate for long.

Iran’s politics are defined by the immense pressure put upon the country by the United States and its regional allies (Israel and Saudi Arabia). The width of the Iranian Revolution in 1979 carried within it an Iranian Left, which now no longer exists (Saeed Soltanpour, like so many of his generations on the Left, was executed in 1981). In Iraq, the Communists have re-emerged haltingly, and have participated in the revolts since 2011 against a government whose policies are utterly dictated by an IMF agenda. ‘We want a homeland’, cry Iraqis in their recent protests. So do people from Lebanon to Afghanistan. During the Iranian Revolution, a left group wrote on the walls of the Ministry of Justice: At freedom’s dawn, freedom’s place is empty (dar tulu-e azadi, ja-ye azadi khali). The revolt had happened, but the full promise of revolution had been suspended.

One of Iran’s most brilliant poets, Forough Farrokhzad, who died in 1967 in a car accident, wrote in the circles of the anti-Shah resistance:

The constant theme from the West that it wishes to annihilate Iran has made the country retreat into patriotism. The West’s suffocation has squashed social development, contracted the economy (by 10% last year), and deformed social life. A winter such as this cannot go on forever.

One day, at Nowruz (Persian New Year) in March, the cherry blossoms will not merely bloom in Tehran; their arrival will be a sign, as Saeed Soltanpour sang, of the end of the long siege against Iran that began in 1979. That siege can only end when imperialism is forced out of the Middle East.

PS: you can find our newsletters in a range of languages from Hindi to Portuguese. If you would like to volunteer to translate this newsletter in a different language, please let us know. All of our publications can be read on our website.

One thought on “When Will The Winter Come to An End?: The Fourth Newsletter (2020)”