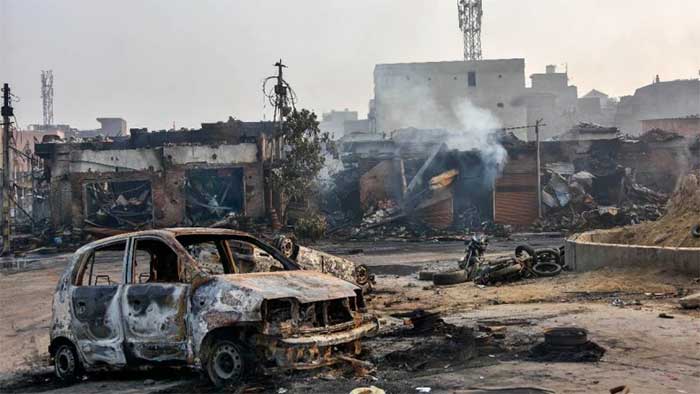 Muslims for Democratic India: The sacrifices given by Muslims of India didn’t stopped at 1947 but till continued, before Independence they fought for freedom and after independence they are fighting for existence even in this digital era where world is considered as a global village.

Since 2 months or more, our country has seen massive and sustained protests against the union government’s divisive, dangerous and discriminatory citizenship Amendment Act. This has been a movement which has not only affirmed equal citizenship as a right, but a collective value that is the basis of any constitutional democracy.

In January, 23 alone killed in the state of Uttar Pradesh and most of the dead were Muslim daily wagers who succumbed to alleged police bullets as fact finding reports claimed, 5 killed in Assam and 2 in Karnataka, 100’s got injured, 1000’s were detained during anti-CAA protests across the nation.

The time line of major communal riots in India after Independence:

This riot was believed to be instigated by violence in East Pakistan now Bangladesh, after 16 years of Independence the hindus attacked Muslim mill workers in Kolkata, violence spread in rural areas of West Bengal and had left over a hundred people dead, 438 people were injured. Over 7000 people were arrested. 70,000 Muslims have fled their homes and 55,000 were provided protection by the Army of India. Muslims in Kolkata started living in ghettoize since then.

It refers to the communal violence between Hindus and Muslims during September–October 1969, in Gujarat, India.  The Gujarat’s first major riot and most deadly violence in independent India, that involved massacre, arson and looting of Muslims on a large scale. According to the official figures, 660 people were killed, 1074 people were injured and over 48,000 lost their property. Unofficial reports claim as high as 2000 deaths. The Muslim community suffered the majority of the losses. Out of the 512 deaths reported in the police complaints, 430 were Muslims. Property worth 42 million rupees was destroyed during the riots, with Muslims losing 32 million worth of property.

Bhiwandi Riots in 1970 was an instance of anti-Muslim violence which occurred on 7 and 8 May in the Indian towns of Bhiwandi, Jalgaon and Mahad. There were large amounts of arson and vandalism of Muslim-owned properties. Similarly, in Moradabad – 1980, an estimated 2,500 people were killed. The official estimate is 400 and other observers estimate between 1,500 and 2,000. Local police were directly implicated in planning the violence.

According to Government records, 1819 persons belonging to the religious minority community i.e, Muslims were brutally killed during a six-hour period started in morning February 18th, 1983 at 14 villages of Nagaon district. (Unofficial figure of people lost lives were 10,000). Later police filed 688 criminal cases in connection with Nellie massacre and only 310 cases were charge-sheeted and the remaining 378 cases were closed due to the police that claimed lack of evidence. But all the 310 charge sheeted cases were dropped by the subsequent Government as a part of the Assam Accord, 1985; therefore not a single person even had to face the trial for the gruesome massacre. Nellie massacre is described as one of the worst pogroms since World War II.

The Operation Blue Star, was an Indian military operation carried out between 1 and 8 June 1984, ordered by PM Indira Gandhi to remove religious leader Jarnail Singh Bhindranwale and his armed militants from the buildings of the Harmandir Sahib complex in Amritsar, Punjab.   Bhindranwale died and militants were removed from the temple complex, it was criticized by Sikhs worldwide who had interpreted it as an assault on Sikh religion. 4 months later, on 31 October 1984, Indira Gandhi was assassinated  by her two Sikh bodyguards followed by a series of anti-Sikh pogroms for five days continuously, starting Oct. 31, reports claim 2,800 to 17,000 Sikhs were killed across India. The violence, however, was centered in Delhi. Later 20,000 left the city and at least 1000 displaced according to reports.

The Hashimpura massacre is an incident of mass murder which took place in the month of May, 1987 near Meerut in Uttar Pradesh, India. In 1987 Meerut communal riots in between March to June death toll was recorded as 350. Delhi High court in 2018 convicted 16 out of 19 personnel of the Provincial Armed Constabulary who rounded up 42 Muslim youths from the Hashimpura  locality, took them to the outskirts of the city, shot them in cold blood and dumped their bodies in a nearby irrigation canal. After few days, the dead bodies were found floating in the canal and a case of murder was registered. 19 men were accused of having performed the act. After 3 decades on October 31, 2018, the Delhi High Court convicted the 16 personnel of the PAC and sentenced them to life imprisonment, venturing the trial courts verdict.

Hindu extremist groups attacked and destroyed the historical Babri Masjid in Ayodhya city of Uttar Pradesh. The mosque was built by Mughal Emperor Babur in 16th Centuary. Following the incident, wide-scale communal riots took place in Mumbai, heart of bollywood industry. The riots began on 6th December and raged on for a month. Officially 900 people were killed, more than 2,000 injured and many displaced. Media recorded it as “a pre-planned pogrom,” that had been in the making since 1990, and stated that the destruction of the mosque was “the final provocation”. A high-ranking member of the special branch, V. Deshmukh, gave evidence to the commission tasked with probing the riots and said the failures in intelligence and prevention had been due to political assurances that the mosque in Ayodhya would be protected, that the police were fully aware of the Shiv Sena’s capabilities to commit acts of violence, and that they had incited hate against the minority communities. The Muslim community was left empty hand even after the democratic, legal and political struggle of more than two and half decades for the justice, but accepted the Supreme Court judgment in the interest of communal harmony in 2019 and Babri Masjid land is handed over to majority community of India.

On 28th February, anti-Muslim pogrom occurred in the western state of India, Gujarat then Narendra Modi was Chief of State and now the Prime Minister of India. According to official figures, the riots ended up with 1,044 dead, 223 missing, and 2,500 injured. Of the dead, around 80% were Muslims. other reports claimed the death toll were in between 1900-2000. Many brutal killings and rapes were reported on as well as widespread looting and destruction of Muslims property. Then CM was accused of initiating and condoning the violence, as were police and government officials who allegedly directed the rioters and gave lists of Muslim-owned properties to them. Almost 20,000 Muslim homes and businesses and 360 places of worship were destroyed. Roughly, 150,000 people were displaced. The riots started after Muslims were blamed for allegedly burning a train which left 59 Hindu people dead. A year before, justice Nanavati-Mehta Commission gives clean to Narendra Modi for Anti-Muslim riots of Gujarat in 2002.

The clashes between two communities of Muzaffarnagar district of Uttar Pradesh, India in August–September, resulted in at least 62 deaths, 42 were Muslims and 20 were Hindus and injured 93 and left more than 50,000 displaced. The exact numbers of deaths is of much debate as, in Public Interest Litigation filed by a victims of the violence, in the Supreme Court, the number of deaths is suggested to be over 200.  This riot has been described as “the worst violence in Uttar Pradesh in recent history”,  Supreme Court of India while hearing petitions in relation to the riots held the Akhilesh Yadav led Samajwadi Party, prima facie guilty of negligence in preventing the violence and ordered it to immediately arrest all those accused irrespective of their political affiliation. The state government then formed an SIT to probe the riot cases and SIT has filed charge sheets in 175 cases. Police had registered cases against 6,869 people and arrested 1,480 people in connection with the said riots. According to the SIT, 418 accused have been acquitted in 54 cases due to lack of evidence.

75 days crossed, since anti-CAA movement begun from JMI followed by AMU and MANUU and Shaheenbagh 24×7 sit-in iconic protests came light which gave birth to more than 150 Shaheenbagh across India and at least 17 in Delhi – the capital of India. According to media reports on 23rd February, after the hateful speech against Muslims by right-wing politician his followers started carrying out despicable acts of violence as the police ineffectively looks on. Residents of Maujpur, Bhajanpura, Chandbagh, Seelampur, Jaffrabad and other areas of Northeast Delhi were afraid that hate filled mobs might run through at any moment, unchecked by police or state authorities. On 27th late night it was officially declared that 38 people killed after the attack by right wing goons, which began after provocative speeches by politicians of hindutva ideology and on which Delhi High Court ordered police to File FIR Against Kapil Mishra, Anurag Thakur and Parvesh Verma, but the same day Judge S Muralidhar who gave the order got transferred to Punjab and Haryana High Court from Delhi. This shows the clear agenda of state and administration against the minority community.

Syed Azharuddin is a social activist