Day two of Julian Assange’s US extradition hearing saw his lawyers argue he made great efforts to ensure his leaks endangered no lives and even warned the White House when media outlets were about to dump unredacted files.

END_OF_DOCUMENT_TOKEN_TO_BE_REPLACED

Assange lawyer brings up claim US mulled ‘kidnapping and poisoning’ of publisher – here’s what we know
https://on.rt.com/abnr

‘Lies, lies and more lies’: Lawyer slams day 2 of Julian Assange’s US extradition hearing, here is how it went down
https://on.rt.com/abni

END_OF_DOCUMENT_TOKEN_TO_BE_REPLACED

The Syrian Arab Army continues its campaign to liberate Idleb governorate. The current main area of operation is in the southeast of the terrorist held area where the SAA attacks in a northern and western direction. The aim of the operation is to bring the M4 highway from Latakia to Aleppo under government control.
END_OF_DOCUMENT_TOKEN_TO_BE_REPLACED

Mark Summers QC, arguing for Julian Assange’s legal defense, spent the second day of Assange’s extradition hearing at Woolwich Crown Court thoroughly debunking two key allegations the US government makes against Assange in its extradition request. The US has alleged that Assange attempted to help Manning conceal her identity, and it has alleged that Assange and WikiLeaks released the full unredacted State Department cables in 2011 with a reckless disregard for the harm it could cause.
END_OF_DOCUMENT_TOKEN_TO_BE_REPLACED

Protesters picket outside a Chase Bank branch in November 2019. An Extinction Rebellion campaigner released a leaked document from the bank Thursday in which JP Morgan Chase economists warned the company’s investment in fossil fuels is contributing to the climate crisis. (Photo: Erik McGregor/LightRocket via Getty Images)

Climate campaigners on Friday expressed hope that policymakers who are stalling on taking decisive climate action would reconsider their stance in light of new warnings from an unlikely source: two economists at J.P. Morgan Chase.

END_OF_DOCUMENT_TOKEN_TO_BE_REPLACED

Turkey’s Request for U.S. Patriot Missiles to Pressure Russia In Syria Will Not Work
http://infobrics.org/post/30425/

END_OF_DOCUMENT_TOKEN_TO_BE_REPLACED

February 2020 was an unfortunate period in Turkey’s policy towards Syria. A powerful offensive by the Syrian government army in the Idlib province entailed the capture of almost half of the province’s territory and control establishment over the international Damascus-Aleppo highway. At least four of Turkey’s largest observation posts found themselves deep in Syrian-controlled areas.

END_OF_DOCUMENT_TOKEN_TO_BE_REPLACED

If we are to believe it, Julian Assange of WikiLeaks, the man behind showing the ugliness of power, is the one responsible for having abused it.  It is a running theme in the US case against this Australian publisher, who has been given the coating of common criminality hiding the obvious point: that the mission is to make journalism on official secrets, notably those covering atrocity and abuse, a crime.

END_OF_DOCUMENT_TOKEN_TO_BE_REPLACED

Black Oppression is Environmental Injustice / One Dollar Bail, But Still
in Jail / Blacks Continue to Die on the Alter of White Womanhood /
Mumia Speaks on the Cops and Today’s Deadly Economy

END_OF_DOCUMENT_TOKEN_TO_BE_REPLACED

The atrocities of Operation Condor – the U.S.-backed covert plan by Argentina, Chile, Brazil Paraguay, Uruguay and Bolivia to eliminate left-wing influence in Latin America – have been gradually revealed through declassified documents that detail the diplomatic manoeuvring and state terror that left tens of thousands of people killed, tortured and disappeared. Argentina is estimated to have the highest death toll with over 30,000 dictatorship opponents killed and disappeared. The Videla dictatorship in Argentina worked in close collaboration with Chile’s dictator Augusto Pinochet, who had ushered in a violent neoliberal experiment in Chile and a far reaching network of international surveillance to keep tabs on, and eliminate, any traces of organised resistance to the dictatorship that had the potential to form abroad.

END_OF_DOCUMENT_TOKEN_TO_BE_REPLACED

By Laura Tieman: This week’s edition of the Lancet—the world’s pre-eminent peer-reviewed medical journal—carries a letter from 117 medical doctors in 18 countries, renewing their call for urgent action to save the life of WikiLeaks publisher Julian Assange. Their letter appears less than one week before the start of the US extradition hearing in London that may decide Assange’s fate.

END_OF_DOCUMENT_TOKEN_TO_BE_REPLACED

Woolwich Crown Court is designed to impose the power of the state. Normal courts in this country are public buildings, deliberately placed by our ancestors right in the centre of towns, almost always just up a few steps from a main street. The major purpose of their positioning and of their architecture was to facilitate public access in the belief that it is vital that justice can be seen by the public.

END_OF_DOCUMENT_TOKEN_TO_BE_REPLACED

Huawei in the Crosshairs

The United States will risk anything, even a nuclear conflagration with China, to maintain its tenuous grip on global power.   – Continue

END_OF_DOCUMENT_TOKEN_TO_BE_REPLACED 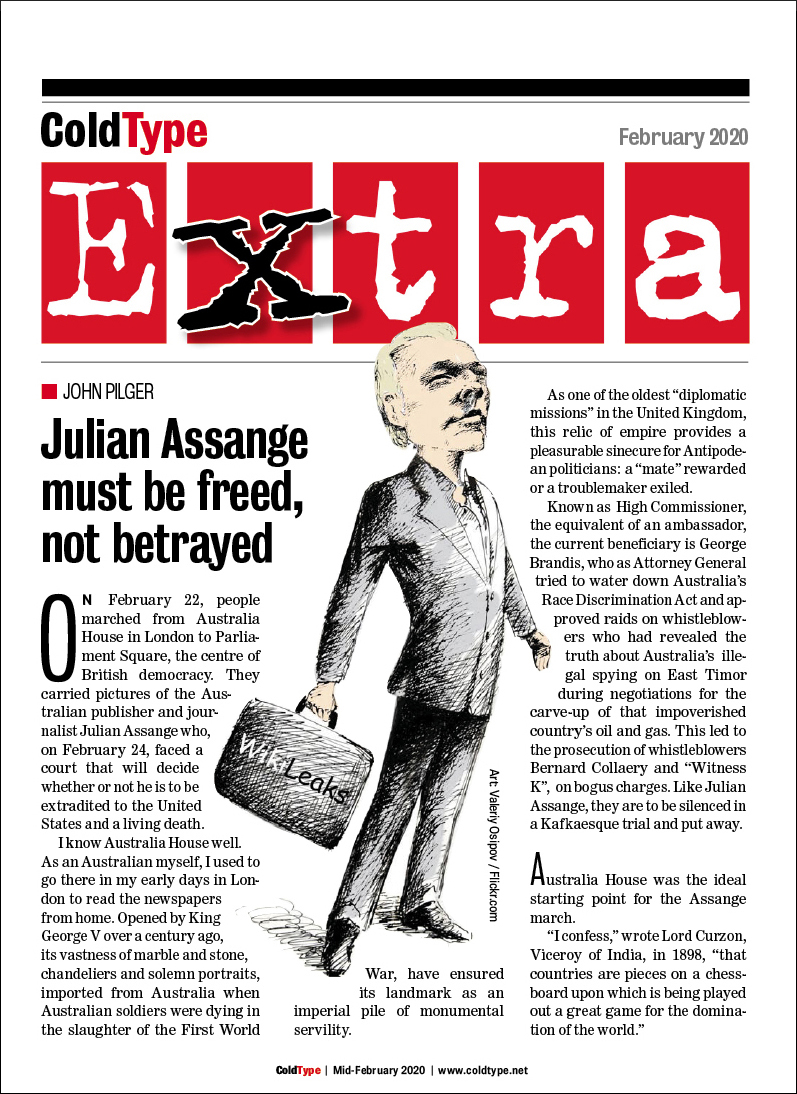