The current public reaction to the coronavirus pandemic confuses even propaganda specialists:

Blake News @blakehounshell – 1:19 UTC · 6 Mar 2020
I was looking at this timeline of the H1N1 pandemic put out by the CDC, and it’s way worse than I remembered. I don’t recall the same daily drumbeat of coverage but that was a different news environment. Or was I just not paying close attention?

The current Covid-19 panic was caused by seven weeks of daily anti-China propaganda as the international media abused the crisis to bash Chinese officials, citizens and their culture. H1N1 originated in the U.S. which utterly failed to contain it. It was therefore not propagandized.

China continues with its excellent efforts to get the epidemic under control. 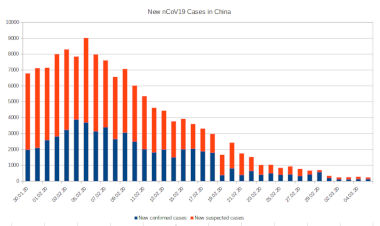 Today China reported 143 new cases of confirmed infections and 102 new cases of suspected infections. But while the number of new cases within China continues to decline the Chinese government has to confront a new problem. What is it going to do to prevent newly imported cases?

China criticized other countries when they closed their borders to people from China. It will find it difficult to tell others that they are not allowed to come.

Iran, Italy and South Korea now have more coronavirus cases per capita than China which has 0.057% per inhabitant. Iran has 0.059%, Italy has 0.063% cases per capita and in South Korea 0.132% of all inhabitants are infected. These numbers are likely to increase. They look very small but would explode if no serious measures were taken.

Covid-19 mainly hits older people. There were only few cases which involved children and there was doubt that children could be infected at all. But a new study suggests that children are as susceptible as adults. They just don’t show strong symptoms. To really fight a coronavirus cluster in a local area thus requires to close all nearby schools down. This will unfortunately increase the social disruption.

The death rate in Italy confirms the trend that mostly elderly die from the disease (machine translation):

The average age of deceased and positive patients in Covid-2019 is 81 years, mostly men. They, in more than two thirds of cases, have three or more pre-existing pathologies.

This was confirmed by an analysis conducted by the Istituto Superiore di Sanità on 105 Italian patients who died up to 4 March.
…
The average age of the patients examined is 81 years, about 20 years higher than that of the patients who contracted the infection. There are 28 women (26.7%).

Only managers of pension funds will like those numbers.

The general death rate estimates for nCov19 infections have been lowered a bit. Right after the first outbreak in Wuhan city it had the highest death rate with some 14% of all cases. That number decreased strongly as the city received the resources it needed. It is now near three percent. The death rate in China outside of Hubai province is about 0.7%. If there is a significant number of symptomless infections the real number will be even lower.

The biggest danger then is the lack of capacity in medical institutions. China was able to quickly build new hospitals in Wuhan and it moved 40,000 health workers from outside the city to Wuhan to help with the epidemic.

The U.S. and European countries are unlikely do be able to make similar efforts if an outbreak widens. That is why they must immediately react to new clusters and prevent those from growing further. Testing must become widely available and it must be for free. Otherwise cases will continue to linger in certain communities and then suddenly lead to wider outbreaks. This is not the way to beat an epidemic:

Through interviews with dozens of public-health officials and a survey of local data from across the country, The Atlantic could only verify that 1,895 people have been tested for the coronavirus in the United States, about 10 percent of whom have tested positive. And while the American capacity to test for the coronavirus has ramped up significantly over the past few days, local officials can still test only several thousand people a day, not the tens or hundreds of thousands indicated by the White House’s promises.

Even U.S. nurses who had contact with corona patients have trouble to get tested.

Some Iranian officials started to take the outbreak seriously only after several of their colleagues fell ill. It seems that the current White House resident has a similar mentality. He will only start a serious effort after people near to him test positive or fall ill. Trump requested only $2.5 billion from Congress to fight the epidemic. The Senate then passes a $8.3 billion spending bill for coronavirus related issues. That is still not enough and more urgent legislative measures must be taken.

Trump is best advised to just shut up and let the professionals do their job. Politicizing the epidemic will only raise distrust in the official statements:

The global economic shock the epidemic was expected to causes is setting in. Airlines get hammered as more and more people decline to travel:

The shares of the top seven US airlines reacted sharply today, with drops as of mid-afternoon ranging from -6.8% for Delta to -16% for Spirit Airlines, which is now down 49% since January 17 before the coronavirus threatened the travel industry.
…
The IATA’s new estimates see a spectrum between two scenarios for 2020:

Several large airlines will go bankrupt and thousands of people will lose their jobs.

The panic around the epidemic creates a demand shock in two different ways. Some products are suddenly in high demand and shortages appear as people are hording toilet paper and masks. On the other side spending on restaurant visits and vacations will evaporate. There will also be supply shortages as companies with infected workers, especially in China, have shut down.

All this creates disruptions and economic losses for companies and for many, many individuals.

Some companies are doing the right things. As there is an outbreak in Seattle Microsoft has told its employees who can work from home to do so. But there are also hourly workers who work for vendors and who staff its on-campus cafes. Microsoft promises to take care of them:

We recognize the hardship that lost work can mean for hourly employees. As a result, we’ve decided that Microsoft will continue to pay all our vendor hourly service providers their regular pay during this period of reduced service needs. This is independent of whether their full services are needed. This will ensure that, in Puget Sound for example, the 4,500 hourly employees who work in our facilities will continue to receive their regular wages even if their work hours are reduced.

Such sanity should be more widespread.