Remember when 4 million new voters registered? When 2 in 3 of those registrations were under the age of 35? Remember when the polls predicted a hung parliament (or maybe only a very small Tory majority)? Even the private Tory poll had the gap at just 4pts. And the queues of young people at polling stations on election day?

So why then, when every single poll in the last 2 years suggested that if there was another referendum ‘REMAIN’ would win, did we vote for a bunch of hard-right rabid Brexiteers?

So what happened? Why did we lose? Where did all the voters go? Well, grab a cuppa, sit back and enjoy this little story, brought to you by the data nerd called me….

In milder, lighter, densely populated England, which also has many Labour/Tory marginals, the postal vote increased by +19%. That’s 10 times more!

Some constituencies such as Guildford (strong remain area) saw a massive postal vote turnout at an unprecedented 87%. The Tories won here in December with a margin of win of just 3,337. Eh?

Is it strange that these marginal seats all saw massive postal vote turnout and won by just a few thousand votes? In fact, the 2019 GE, around 50 seats were won by the Tories with marginal votes.

Whether something fishy happened or not, surely, this huge increase in postal voting in England would be big news, right? So why does no-one know about this?

And think back to a couple of days before the General Election… can you remember BBC political editor Laura Kuenssberg mention something about Labour being down in the postal votes? See it here:

As of this morning, the 11th December episode of Politics Live, which featured Laura Kuenssberg talking about postal votes, is not available on the BBC iPlayer, for some strange reason.

Thankfully, we have this clip to keep sharing. pic.twitter.com/sEeYl3ltcu

The BBC removed that episode of Politics Live from iPlayer for some reason.

Yeah, I didn’t know that either.

Maybe we should ask the main company who was tasked with collating the postal votes? A company called Halarose. Oh no, wait, we can’t ask anyone at Halarose because the company was suddenly dissolved within days of the election so it doesn’t exist anymore. A dead man tells no tales. 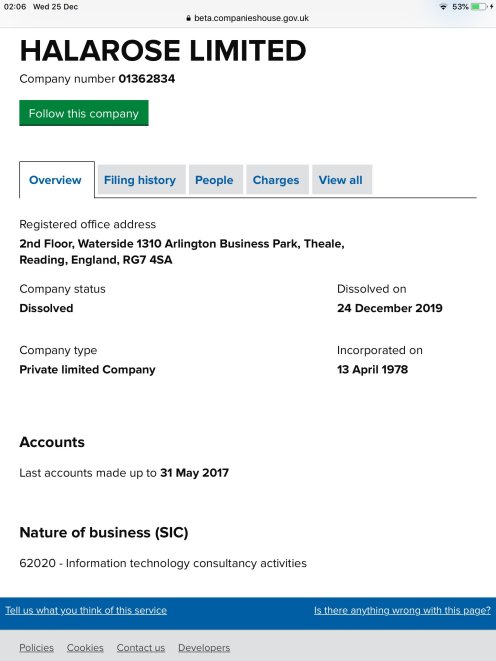 Hmmm, I wonder who owned Halarose? Ladies and Gentlemen, I introduce you to a company called IDOX Group Ltd. And the main interest of IDOX is… wait for it…. oil and gas. Wait, what? I shit you not.

A quick google of IDOX seems to suggest that former conservative MP and current Tory life peer, Peter Lilley, was made Director in 2012 and owns at least half a million shares in the company. He even declares this in the register of member interests in Parliament.

Mr. Lilley, a climate change denier, voted against the Climate Change Act and earned a fortune as a non-exec of Tethys Petroleum, a Cayman Islands-based oil and gas company with drilling operations in former Soviet countries Kazakhstan, Tajikistan and Uzbekistan. He’s also an ardent Brexiteer and supports the “Leave means Leave” campaign. Of course he does. 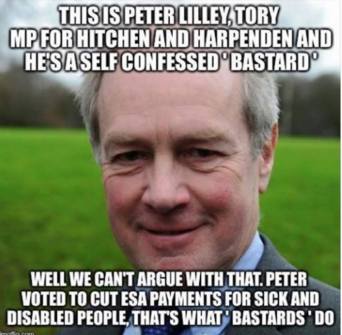 So, Lilley joined IDOX in 2012 and by May 2013 they boasted on their website that they had control of elections and voter registration across the UK, an astonishing feat given the timescales involved. By 2019, IDOX and it’s subsidiaries had contracts with 90% of local authorities to provide Postal Voting Services ranging, from printing and posting the ballot packs, to verifying returned votes, to storing all the signatures from the application forms, and the returned statements. Check out their services here (https://elections.idoxgroup.com/solutions/).

In February 2014, David Cameron even endorsed postal voting when he wrote to every voter on the electoral register and said: “signing up for a postal vote puts you in control and ensures your voice will be heard whatever happens”.

In fact, there is evidence that the cabinet office rushed through procurement of IDOX services just before the general election in 2019: https://bylinetimes.com/2020/01/07/why-did-cabinet-office-rush-through-procurement-of-controversial-electoral-services-company-idox-just-before-the-general-election/

According to former IDOX employees, the way that it works is that if you apply for a postal ballot then IDOX scans your signature and date of birth into their system and just before an election, they send out the ballot papers. You complete them and send them back. They arrive at IDOX and are scanned into their system where their software attempts to match your ballot signature and date of birth to that on their records from your original application. If it matches then they digitally count your vote. If something doesn’t match or is unreadable then a scanned copy is passed to a human employee to check. The human employee is often working from home and confirms or rejects the signature, DoB or even clarifies which candidate has received the vote in some cases and then moves on to the next scan. The postal vote totals for each candidate are then sent electronically to each local authority where they can input the paper ballot numbers too, so even the adding up is outsourced. The electoral commission has confirmed in an FOI request that “a private company supplies result collation software”. 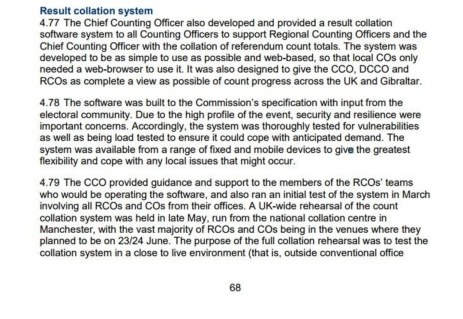 IDOX also sells a “canvassing tablet app” to political parties. This would be used when door-knocking and the canvasser, after conversing with the tenant, would record who they would be voting for. This data could be built-up over time and linked to external data sources such as the electoral roll, public records, and even social media. Now IDOX would know who plans to vote and for which party along with having the signature and DoB of every postal voter. What is stopping them from changing votes or making some votes up from unreturned ballots? What is stopping them from delaying the postal vote so a ‘bad’ voter gets their ballot papers too late?

Of course, we could ask IDOX or the local authorities or the electoral commission for a full, independent forensic audit of the process and system. Except that the local authorities and the election commission have admitted that they don’t actually know how accurate the IDOX systems are so we just have to take their word for it. This isn’t very reassuring due to the fact that according to court documents obtained in Malta, IDOX software has a 20% match error rate. 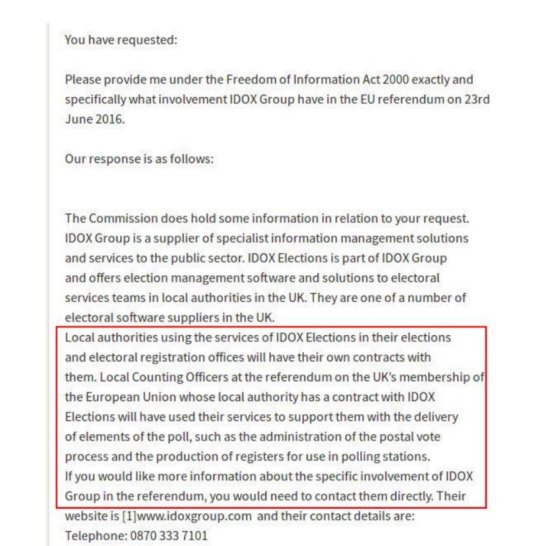 Oh, and they have a track record: 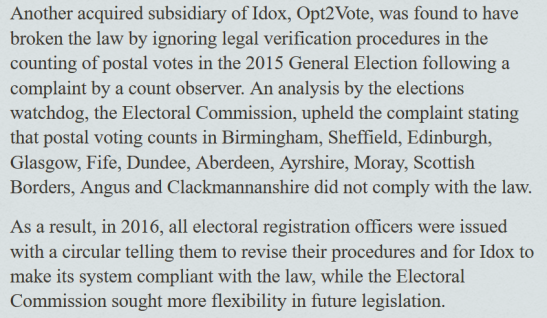 The authorities provide little assurance in the whole process too, for example, in Newcastle-Under-Lyme in 2017, “at least 998 people were denied the opportunity to vote at the Parliamentary election and a further number of up to 362 may also have been disenfranchised.” All because of “counting software errors” according to an investigation after the snap election. Or during the EU referendum in 2016 when 170,000 votes were rejected due to “problems verifying the voter”. Or when around 200,000 postal votes were lost when a van was stolen during the 2017 snap election. Or when they accidentally counted over 40,000 ballots when less than 7,000 people were registered to vote (https://www.bbc.co.uk/news/amp/uk-england-wiltshire-49611803).

Which company was involved in all of these cases? IDOX or one of its subsidiaries. Google it. Heck, you can even Bing this shit.

And, fellow UK citizens, I think we need to start asking questions about the blank data, unreturned values, and inconsistencies in the results of your election provided by the Electoral Commission. And start by asking why have gaps appeared only since 2015? We also need to ask why thousands of people are providing examples on Twitter, using the #ElectoralFraud hashtag, of late ballot papers, not being on the electoral register, having ballot papers returned because “their signature did not match that on record” and so on. 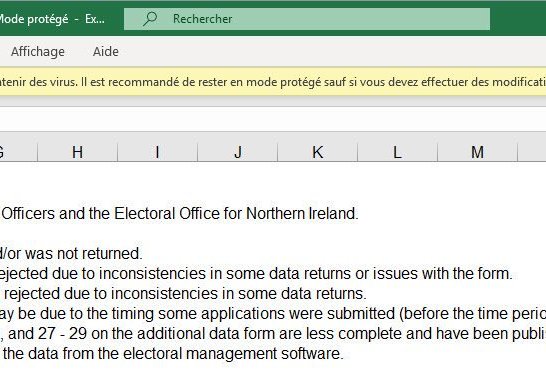 Who built IDOX systems, maybe they’ll give us some reassurance? McLaren software is the likely candidate as they are a software company owned by IDOX. McLaren list one of their major partners on their website as ‘CROC’, a huge Russian IT company that also built a data centre for Alfabank who helped Donald J Trump launder money. I know this link is tenuous so I won’t go there but IDOX does partner with a Spanish company called Scytl. They have been up to similar tricks all over the world and are kind of infamous at leaving hackable backdoors in their voting systems for Switzerland and Australia to name just two.

Thanks for making it this far. Here is a quick recap:

Maybe nothing sinister happened with our postal votes, but, if you think about it, there is no way Johnson could have been elected without corruption playing its part. Maybe IDOX is the reason Labour lost the 2019 General election? Maybe it wasn’t but, if nothing else, some basic due diligence appears to have gone amiss that could provide everyone with some basic assurances regarding a key component of our democracy.

So is this why Labour lost? Well. they probably dropped a number of balls, to be honest – Brexit wooliness, overwhelming policies, a tarred leader, smears, lies, a media onslaught, and much more. But did postal vote fraud occur and did that affect the outcome of the 2019 General Election? I can’t believe that is even a question but it is one that could desperately do with an answer, please.

Disclaimer: Of course, I would love all of this to be nonsense. Feel free to debunk any or all of it. I am not a “conspiracy theory nutjob” – the earth is round, we landed on the moon, man-made climate change is real, Elvis is dead and we haven’t discovered aliens (probably). Do a search on “IDOX” or “Peter Lilley” or “postal vote fraud” and see what you find for yourself. Let me know.

10 thoughts on “Did Labour really lose for this reason?”