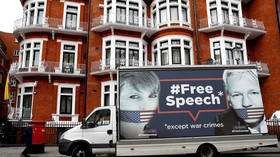 The bombshell revelations emerged on Tuesday in court documents from an ongoing criminal case against UC Global’s owner, David Morales, in the Spanish courts. Morales is accused of privacy violation, bribery, and money laundering. While his company was hired to provide security for the Ecuadorian embassy in London, he allegedly spied on Assange’s guests and the Ecuadorian staff on behalf of the US as well, traveling to the US with recordings from the embassy on a monthly basis.

UC Global specifically targeted the WikiLeaks’ publisher’s family, according to the documents. An email Morales allegedly sent to his staff calls for “special attention on Stella Morris”, Assange’s fiancée, and refers to “a person fully dedicated” to trailing her mother, who was found to be living in Catalonia. “All this has to be considered top secret, so the dissemination will be limited,” the email continues. Former UC Global employees also turned over to the court hours of video of Assange’s young son Gabriel.

Morales was allegedly so obsessed with proving the child was Assange’s that he ordered a former employee to steal a used diaper in order to conduct a DNA test. That employee testified in court that he instead warned Morris about the plan, urging her to stop taking the boy to the embassy “because they planned to steal his diapers to prove that he was the son of Julian Assange.” Another ex-employee told El Pais earlier this week that Morales came up with a plan to steal the baby’s pacifier instead, after a laboratory told him DNA from a dirty diaper couldn’t be used for a paternity test.

When Morales suspected the Ecuadorian embassy wanted to end UC Global’s contract, he allegedly took the extraordinary measure of stealing “extremely private photos” of a female diplomat from her personal hard drive to use as blackmail against SENAIN, Ecuador’s national intelligence agency. The images were then “printed and were part of an extortion report that sought to prevent SENAIN from terminating the contract,” according to the complaint against Morales.

No part of the embassy was safe from UC Global’s surveillance, say Assange’s lawyers – although he insisted on holding legal meetings in the women’s bathroom in the hope of securing some privacy, it too was equipped with microphones by the security firm. Such a move is a violation of lawyer-client confidentiality and an issue that could potentially disrupt the extradition hearings against the WikiLeaks publisher, if it’s proven that the US government had access to those recordings.

The alleged surveillance and blackmail of the embassy’s Ecuadorian staff prove it was working for the US, Assange’s lawyers claim. Morales has insisted that all UC Global’s actions were taken on behalf of the Ecuadorian secret service and “there was absolutely no outside access” to any information gathered inside the embassy. He has denied all the allegations against him.

Assange is currently fighting extradition from the UK to the US, where he has been charged with 17 violations of the Espionage Act and one count of conspiracy to commit computer intrusion stemming from WikiLeaks’ 2010 publication of classified Pentagon documents leaked by former US Army intelligence analyst Chelsea Manning. If convicted, he faces up to 175 years in priso