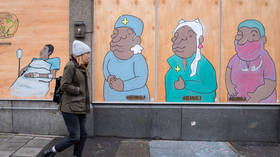 A woman passes a mural showing doctors and nurses in south London, as the UK continues in lockdown to help curb the spread of coronavirus ©  Getty Images / Dominic Lipinski / PA Images

Maybe the moment has come to take a step back from our exclusive focus on the pandemic, to allow ourselves to consider what coronavirus and its devastating effects reveal about us as a society.

The first thing that strikes the eye is that, contrary to the cheap motto ‘we’re all in the same boat’, class divisions have exploded. At the very bottom of our hierarchy, there are those – refugees, people caught in war zones – whose life is so destitute that, for them, the pandemic is not the main problem. While these folk are still mostly ignored by our media, we’re bombarded by sentimental celebrations of nurses on the frontline of our struggle against the virus. But nurses are just the most visible part of a whole class of ‘care-takers’ that is exploited – albeit not in the way the old working class portrayed in Marxist imagery was exploited. Instead, as David Harvey puts it, they form a “new working class”.

He says: “The workforce that is expected to take care of the mounting numbers of the sick, or to provide the minimal services that allow for the reproduction of daily life, is, as a rule, highly gendered, racialized, and ethnicized. This is the ‘new working class’ that is at the forefront of contemporary capitalism. Its members have to bear two burdens: at one and the same time, they are the workers most at risk of contracting the virus through their jobs, and of being laid off with no financial resources because of the economic retrenchment enforced by the virus. The contemporary working class in the United States –  comprised predominantly of African Americans, Latinos, and waged women – faces an ugly choice: between suffering contamination in the course of caring for people and keeping key forms of provision (such as grocery stores) open, or unemployment with no benefits (like adequate health care).”

This is why, in France, revolts erupted in the poor northern suburbs of Paris, where those who serve the rich live. And this is why, in recent weeks, Singapore has had a dramatic spike in coronavirus infections in foreign-worker dormitories. As CNN reported, “Singapore is home to about 1.4 million migrant workers, who come largely from South and Southeast Asia. As housekeepers, domestic helpers, construction workers and manual laborers, these migrants are essential to keeping Singapore functioning – but are also some of the lowest-paid and most vulnerable people in the city.” This new working class was here all the time – the pandemic just propelled it into visibility.

To define this sector appropriately, Bruno Latour and Nikolaj Schultz coined the term “geo-social class.” Many of them are not exploited in the classic Marxist sense of working for those who own the means of production; instead, they’re exploited via the material conditions of their life: their access to clean water and air, their health, their safety. The local population is exploited when their land is used for large-scale agriculture aimed at the export market, or for extensive mining. Even if they don’t work for a foreign company, they’re exploited in the simple sense of being deprived of the full use of the land that enables them to maintain their way of life. Take the Somali pirates, for example: they turned to piracy because their sea coast was depleted of fish by foreign companies practicing industrial-scale fishing there. Part of their territory was appropriated by the developed countries and used to sustain our way of life, while theirs was diminished. In this regard, Latour suggests we ought to replace the term “appropriation of surplus value” with “appropriation of surplus existence,” where “existence” refers to the necessary material conditions of life.

Also on rt.com The end of the American dream? Amid Covid-19 crisis, US super-rich flee to BUNKERS in New Zealand

As we’ve discovered, in a pandemic, when even factories are at a standstill, the geo-social class of care-takers has to go on working. So, it seems appropriate to dedicate this May 1 to them, instead of the classic industrial working class. It is they who are the truly over-exploited: exploited when they work because their work is largely invisible and exploited even when they don’t work because of their material conditions. They are not just exploited in what they are doing – they are exploited in their very existence.

The eternal dream of the rich is that of a territory totally separated from the polluted dwellings of the poor – just think about all those post-apocalyptic blockbusters, such as Neill Blomkamp’s film ‘Elysium’, set in 2154, in which the elite live on a gigantic, man-made space station, while the rest of the population resides on a ruined Earth that looks like an expanded Latino-American favela. In today’s real world, meanwhile, expecting some kind of global catastrophe, the rich are currently buying villas in New Zealand or renovating Cold War nuclear bunkers in the Rocky Mountains. But the problem with a pandemic is that one can never isolate oneself completely. Like an umbilical cord that cannot be severed, a connection with polluted reality is unavoidable, whatever your social status.

The statements, views and opinions expressed in this column are solely those of the author and do not necessarily represent those of RT.

One thought on “Slavoj Zizek: May 1 in the viral world is a holiday for the NEW working class”