The Trump administration will continue its efforts to blame China for the novel Coronavirus because the epidemic situation in U.S. will soon become worse:

As President Trump presses for states to reopen their economies, his administration is privately projecting a steady rise in the number of cases and deaths from coronavirus over the next several weeks, reaching about 3,000 daily deaths on June 1, according to an internal document obtained by The New York Times, nearly double from the current level of about 1,750.

The projections, based on modeling by the Centers for Disease Control and Prevention and pulled together in chart form by the Federal Emergency Management Agency, forecast about 200,000 new cases each day by the end of the month, up from about 25,000 cases now. 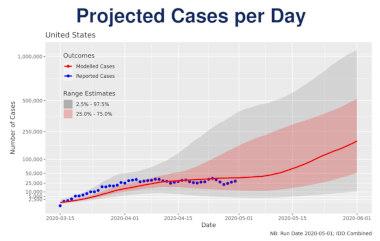 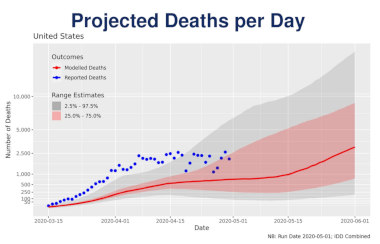 The administration then penned a paper from open sources that contains those and other allegations and pushed it to friendly media.

A Wuhan laboratory is the “most likely” source of the COVID-19 outbreak now ravaging the globe, according to a U.S. government analysis that catalogs the evidence and concludes that other explanations for the origin of the coronavirus are less credible.

The document, compiled from open sources and not a finished product, says there is no smoking gun to blame the virus on either the Wuhan Institute of Virology or the Wuhan branch of the Chinese Center for Disease Control and Prevention, both located in the city where the first outbreaks were reported.

But “there is circumstantial evidence to suggest such may be the case,” the paper says.

“All other possible places of the virus’ origin have been proven to be highly unlikely,” the document concludes. A copy of the report, compiled this month, was obtained by The Washington Times.

A ‘U.S. government analysis’ based on open sources is not an intelligence product but a writeup on Google searches by some intern. But there was pressure to make it into an official intelligence judgment.

Senior Trump administration officials have pushed American spy agencies to hunt for evidence to support an unsubstantiated theory that a government laboratory in Wuhan, China, was the origin of the coronavirus outbreak, according to current and former American officials.

, and scientists who have studied the genetics of the coronavirus say that the overwhelming probability is that it leapt from animal to human in a nonlaboratory setting, as was the case with H.I.V., Ebola and SARS.

That this leaked at all was the first sign that the intelligence services were resisting the push from their higher ups. More push back followed with an official statement.

“As we do in all crises, the Community’s experts respond by surging resources and producing critical intelligence on issues vital to U.S. national security. The IC will continue to rigorously examine emerging information and intelligence to determine whether the outbreak began through contact with infected animals or if it was the result of an accident at a laboratory in Wuhan.”

That was not good enough for the “We lied, we stole, we cheated” Secretary of State Mike Pompeo (vid).

RADDATZ: And, Mr. Secretary, have you seen anything that gives you high confidence that it originated in that Wuhan lab?

POMPEO: Martha, there’s enormous evidence that that’s where this began.  …  I can tell you that there is a significant amount of evidence that this came from that laboratory in Wuhan.

RADDATZ: Do you believe it was manmade or genetically modified?

POMPEO: Look, the best experts so far seem to think it was manmade. I have no reason to disbelieve that at this point.

RADDATZ: Your — your Office of the DNI says the consensus, the scientific consensus was not manmade or genetically modified.

POMPEO: That’s right. I — I — I agree with that. Yes. I’ve — I’ve seen their analysis. I’ve seen the summary that you saw that was released publicly. I have no reason to doubt that that is accurate at this point.

Then the same dodgy paper that was shopped to the Washington Times a week earlier appeared in an Australian broadsheet.

China deliberately suppressed or destroyed evidence of the coronavirus outbreak in an “assault on international transparency’’ that cost tens of thousands of lives, according to a dossier prepared by concerned Western governments on the COVID-19 contagion.

The 15-page research document, obtained by The Saturday Telegraph, lays the foundation for the case of negligence being mounted against China It states that to the “endangerment of other countries” the Chinese government covered-up news of the virus by silencing or “disappearing” doctors who spoke out, destroying evidence of it in laboratories and refusing to provide live samples to international scientists who were working on a vaccine.

A “research document” prepared by “concerned Western governments” is not an intelligence product.

But Foxnews picked up from there and made the paper into one.

A research dossier compiled by the so-called “Five Eyes” intelligence alliance states that China intentionally hid or destroyed evidence of the coronavirus outbreak, leading to the loss of tens of thousands of lives around the world

The 15-page document from the intelligence agencies of the U.S., Canada, the U.K., Australia and New Zealand, was obtained by Australia’s Saturday Telegraph newspaper and states that China’s secrecy amounted to an “assault on international transparency.”

The Australian Telegraph never claimed that the dossier was a “Five Eyes” product. That is a Foxnews invention. The five eyes countries share intelligence but they do not produce common dossiers or analyses. Each service does that separately for its own government.

Only a few hours after the Telegraph had published the above the Australian intelligence services shot the nonsense down.

Senior members of the Australian intelligence community told The Sydney Morning Herald and The Age a research document shared in political circles under the Five Eyes intelligence arrangement was mostly based on news reports and contained no material from intelligence gathering.

A 15-page “dossier” has been widely quoted by local and international media about China’s alleged cover-up of the virus. Australian intelligence officials have since identified a research report which was based entirely on open source material. The officials said it was likely the reports were the same.
…
Multiple senior intelligence sources who spoke to The Sydney Morning Herald and The Age in recent days have confirmed that Australia has still not been provided with any evidence that strongly suggests the Wuhan Institute of Virology was the source of the outbreak. Intelligence agencies have not been able to rule out the Wuhan lab, but the more likely cause of the virus is still the city’s Huanan Seafood Market where environmental samples of the virus were found.

The WHO also said that its had received no evidence from the U.S. about the ‘speculative’ Wuhan laboratory claim.

The Trump administration is likely to continue this game and the intelligence services will hopefully continue to resist the pressure they are under.

As the U.S. will soon have as many death per day from covid-19 as it had casualties on 9/11 the risk of a (military?) escalation against China based on false claims will soon become exceptionally high.