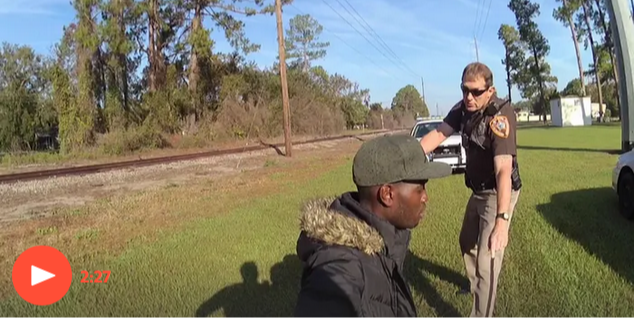 While it took two and a half months for the authorities to finally make arrests in the killing of Ahmaud Arbery, corporate media were much quicker to follow the time-honored practice of besmirching victims of racist violence (FAIR.org, 3/22/17).

First they kill your body. Then they kill your reputation. When white supremacy is the foundation of the US’s media, political, legal and corporate system, victims of racist violence are often killed twice in this way.

The Georgia Bureau of Investigation on May 7 arrested former cop Gregory McMichael, 64, and his son Travis McMichael, 34, for the murder of Arbery, an unarmed 25-year old African American out for a jog—only after a widely circulated video of the lynching became too difficult to ignore. The man who filmed the shooting, William Bryan Jr., 50, was arrested on May 21 on charges of felony murder and criminal attempt to commit false imprisonment after Arbery’s family and civil rights activists pressed that Bryan wasn’t a mere witness, but an active participant in the murder.

But it only took a few weeks for corporate media to dig up and publish irrelevant dirt on Arbery.

Media outlets sometimes offer the excuse that they have to investigate victims’ pasts to fill up column inches, because the identities of police officers who perpetrate racist violence are often concealed. But in this case, the video and police reports made it very clear who the shooters were: On February 23, Travis and Gregory McMichael pursued and shot Arbery for the apparent “crime” of running while black, ostensibly because they assumed, based on the color of his skin, that he was behind a series of break-ins more than seven weeks before. 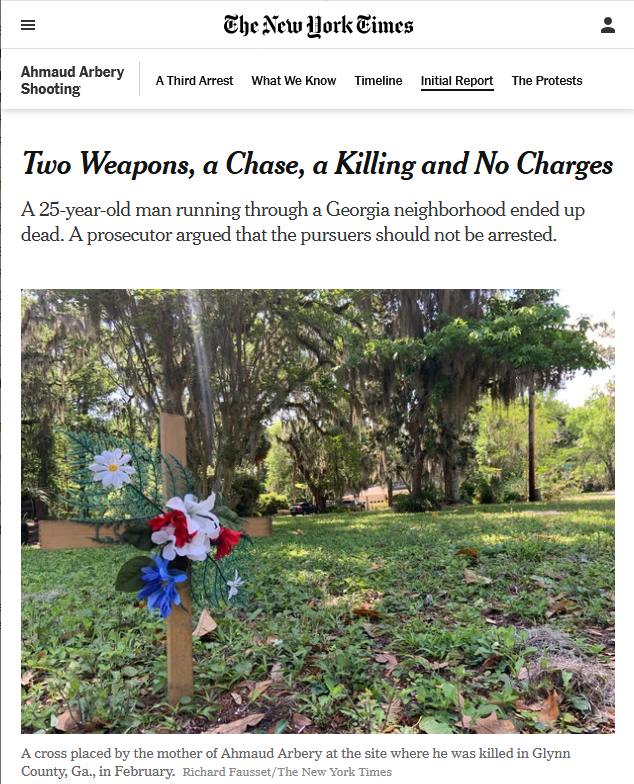 The New York Times headline (4/26/20) has “two weapons, a chase, a killing”—and no killers. In the subhead, Ahmaud Arbery “ended up dead”—and the people who shot him to death are described as “pursuers.”

The New York Times report (4/26/20), with the vague headline “Two Weapons, a Chase, a Killing and No Charges,” cited activists and family members pointing out that even if Arbery had committed a property crime, that still wouldn’t have justified lethal violence. But the Times nevertheless saw fit to include:

But others contend that Mr. Arbery was up to no good. On the day of the shooting, and apparently moments before the chase, a neighbor in Satilla Shores called 911, telling the dispatcher that a black man in a white T-shirt was inside a house that was under construction and only partially closed in.

“And he’s running right now,” the man told the dispatcher. “There he goes right now!”

In his letter to the police, Mr. Barnhill, the prosecutor, noted that Mr. Arbery had a criminal past. Court records show that Mr. Arbery was convicted of shoplifting and of violating probation in 2018. Five years earlier, according to the Brunswick News, he was indicted on charges that he took a handgun to a high school basketball game.

George Barnhill, the prosecutor cited by the Times, has a history of aggressively prosecuting cases that intimidate people of color from voting, and denying motions for people of color requesting a new trial due to flawed forensic evidence (Guardian, 5/17/20). Before recusing himself from the Arbery case, he argued that it was “perfectly legal” for the McMichaels to pursue and confront Arbery with weapons—already judging Arbery to be a “criminal suspect” who had “initiated the fight”—because the McMichaels’ ostensibly armed themselves and pursued Arbery with the intent to “stop and hold” him “until law enforcement arrived.”

Barnhill defended the McMichaels by citing a statute allowing for a citizen’s arrest, though that statute only applies to someone when a “offense is committed in his presence or within his immediate knowledge.” Arbery hadn’t committed any offense, in the McMichaels’s presence or otherwise, and they had no “immediate knowledge” other than the color of Arbery’s skin (New York Times, 5/6/20). And Gregory McMichael had his law enforcement certificate suspended for repeatedly failing to complete required training, losing his legal power of arrest (Washington Post, 5/14/20). 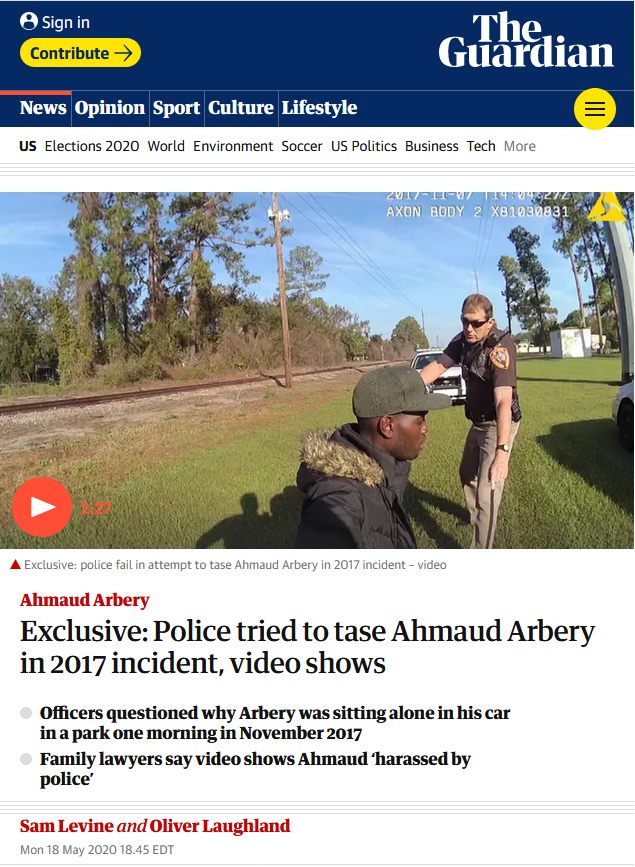 The Guardian’s “exclusive” (5/18/20) revealed that a murder victim had been questioned three years earlier about why he “was sitting alone in his car in a park.”

Nevertheless, the Guardian (5/18/20) published a video from 2017 showing police attempting to tase Arbery after an officer felt “threatened” by Arbery questioning why the officer was bothering him. (The article reported that the cop “suspected Arbery of using marijuana,” noting he “was in a park known for drug activity.”) Because of his death, the Guardian obviously wasn’t able to get Arbery’s perspective on the confrontation, but the paper still included racist passages from the officer’s report that depicted Arbery as a black male possessing animalistic strength and uncontrollable aggression:

Kanago claimed he began to feel threatened by Arbery, later writing in his report that “veins were popping from [Arbery’s] chest, which made me feel that he was becoming enraged and may turn physically violent towards me.”

Following that, the New York Post (5/19/20) published another video from 2017, in which Arbery and his friends were stopped in the parking lot of a Walmart. Arbery was accused of shoplifting a TV, and was arrested while trying to show the officer a receipt, depriving him of a chance to prove his innocence.

As these irrelevant details of Arbery’s past had been publicly available since they were reported by the Times in April, the Guardian and Post making the effort to search for and publish videos showing the police harassing, arresting and trying to tase Arbery served mainly to posthumously humiliate and criminalize him. These reports implicitly attempt to justify his death, further examples of the senseless demandthat victims of racist violence lead unblemished lives before they can be deemed worthy of mourning.

These videos made a splash in other outlets, serving to reinforce the racist stereotype of black criminality:

Of course, even if it turns out to be the case that Arbery had smoked marijuana or had shoplifted prior to the filmed confrontations—in other words, if his shoplifting conviction were not the result of a racist legal system designed to force plea bargains from even innocent suspects—what would any of this have to do with the current situation? Even if Arbery had actually committed the weeks-old burglary the McMichaels suspected him of, a landmark 1985 Supreme Court case regarding the killing of Edward Garner determined that you can’t shoot a burglar simply for running away (Daily News, 5/11/20), so there are no justifications for Arbery’s killing regardless.

Ahmaud Arbery’s past had nothing to do with why the McMichaels killed him, and these reports deflect attention away from the perpetrators of racist violence to the past of their victims instead. These videos are likely to be barred at the McMichaels’ trial as irrelevant and prejudicial to jurors’ perception of Arbery; and news media have no greater justification for digging them up and publishing them.

One thought on “Media Smeared Ahmaud Arbery After His Lynching”