More from Afghanistan where history now happens at a speed seldom seen before.

At least three more province capitals are now under Taliban control. In total 21 out of 34 provinces are now in Taliban hands. Most of the others are contested.

I have modified the yesterday’s Long War Journal map to reflect the confirmed changes in the southeast and east. 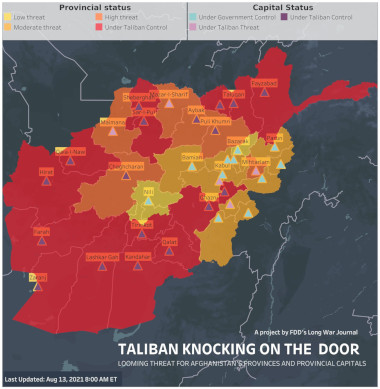 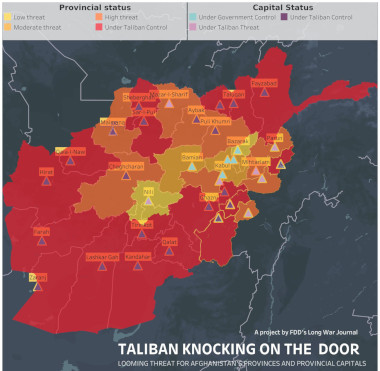 The Afghan Analyst Network just published a detailed report about the development in Paktia over the last years. It explains the Taliban’s operational course of action:

The Domino Effect in Paktia and the Fall of Zurmat: A case study of the Taleban surrounding Afghan cities

A thread by Bilal Sarawary, who hails from Kunar, documents the recent development there.

Yesterday the Taliban have opened a new path to real negotiations.

To understand its full meaning requires a bit of historic background.

The Jamiat-e-Islami party was founded in 1972 by Burhanuddin Rabbani. Its aim was to form an Afghan state based on Islam. Ahmad Shah Massoud and Gulbuddin Hekmatyar were both early followers of Rabbani, being Kabul University students at the time.

In 1976 Hekmatyar broke away from Jamiat to found his own party: Hezb-e Islami. Jamiat members were mostly ethnic Tajik while Hezb members were mostly Pashtun. Jamiat followed a gradualist approach to take over the state. Hezb-i-Islami took a uncompromising militant stand. It gained support from the Muslim Brotherhood, Saudi Arabia and Pakistan.

After the Soviet invasion both groups fought against the occupier. After the Soviet retreat both groups started to fight each other as well as the government. After the communist government fell in 1992 Jamiat took Kabul and installed its own government.  Hezb, later joined by the Uzbek warloard Dostum, attacked Kabul with thousands of rockets. In 1994 Pakistan stopped financing Hezb and started to build the Taliban.

In 1995 the Taliban appeared and pushed both groups out of Kabul. The Hezb Dostum alliance fell apart. Dostum joined the Jamiat in the Northern Alliance. Hezb eventually took the Taliban side.

While fighting continued the Taliban were dominating until November 2001 when the U.S. supported the Northern Alliance to occupy the country. The warlords of the Jamiat have since held onto most of the offices in the various U.S. proxy governments in Kabul.

One of the Jamiat warlords is the Tajik Ismail Khan from Herat near the Iranian border. Khan was the governor of Herat when the Taliban last week took the city and province and arrested him.

In other times one would have expected that the Taliban would kill Ismail Khan. But that did not happen. Instead Ismail Khan received a phone call from Amir Khan Motaqay,  a senior Taliban leader:

This is a very historic call Essentially the TB rep greets Ismail Khan and asks him to ask the other Jamiat-i-Islami members like Atta, Salahuddin, Ahmad Massoud, Qanuni Saib to make a reconciliatory deal with the TB so that we can have peace after 40 years and give no reason for outsider to get involved in Afg affairs. Or even internal forces to start be dissatisfied. He also mentions that the TB have a policy not to insult any figures. Overall spoke to him in a respectful tone. Inshallah this leads to peace

That the phone call was published proves that this is an official Taliban offer and request.

There is unconfirmed news that Ismail Khan is traveling to Kabul today to convince the other Jamiat members to agree to peace with the Taliban and to form a government with them.

The Taliban’s only condition, as far as known, is to remove President Ashraf Ghani and his immediate followers. Everyone, including the U.S., will by now be ready to support that. Ghani has been a roadblock during the negotiations in Qatar. He is an academic and former World Bank bureaucrat who has spent most of his life in the U.S. He has little support in Afghanistan.

Ghani was expected to resign today but in a TV statement given earlier today he only promised to rally the defenses of Kabul. As he is unwilling to recognize the graveness of the military situation someone may well help him to leave the office.

With Ghani removed the two largest factions in Afghanistan, both coming from Islamic movements, could form a government and work out a new framework for the Afghan state.

This must have all along been the big plan behind the Taliban’s current moves. Their military success puts enough pressure on the other side to agree to it.

Other news bits from Afghanistan:

U.S. ‘intelligence’ is a joke. These tweets were a mere six hours apart.

U.S. intelligence estimates for when Kabul could be overrun are now down to 30-90 days, report @barbarastarrcnn, @kylieatwood, and @jmhansler.
By my estimate as a professional estimate analyst, this still leaves time for two or three downward revisions.
CNN: Intelligence assessments warn Afghan capital could be cut off and collapse in coming months

US embassy in the ‘burning documents’ stage of preparation. “one diplomatic source telling CNN that one intelligence assessment indicates that Kabul could be isolated by the Taliban within the week, possibly within the next 72 hours.”
CNN: US Embassy in Afghanistan tells staff to destroy sensitive materials

But don’t despair. Someone did not get the memo. So help is underway.

The Afghan army has had seven corps. Five have now surrendered to the Taliban or dispersed. Only two, in Kabul and Mazar-i-Sharif, are still operating. Neither of them is fairing well.

#BREAKING: This just happed in #MaidanShahr, SW of #Kabul minutes ago. #Afghanistan National Army had sent its Special Operation Forces from #Zabul to secure the town but they surrendered to Taliban with their M1117 APCs! #Taliban will use them for attack to #Kabul on Monday! video

Warlord Ata & Dostum forces in the north just suffered a heavy blow, their commander Ali Sarwar ended up in an ambush after hour of negotiations, his men put up a short lived fight, many casualties now. Some of them reached MazarESharif most have been killed, incld the cmdr.

The defenses of Mazar-i-Sharif have been broken. The city is under attack.

Professor Paul Robinson on how it came to this:

After 20 years & billions of dollars, the American defeat in Afghanistan is worse than the Soviet failure … how has this happened?