The Russian operations in the Ukraine continue at a moderate pace. Some more troops were committed today. In all the Russian military may have now introduced some 20-40% of its prepared forces.

The Ukrainian military is not so much holding a line but concentrating in and around its bigger cities. It has destroyed some bridges north of Kiev to make an approach more difficult. That will slow down the Russian moves but will not prevent them. Russia’s military is famously good at setting up combat bridges.

So far the Russians have used their artillery sparsely. An exception was last night near Kharkiv in the northeast of Ukraine where a strike by multiple launcher artillery systems (MLRS) hit some area target with yet unknown results.

A 13 minutes long video from a highway drive near Kherson, a city north of Crimea, shows nearly 100 destroyed Ukrainian trucks and tanks. These are likely victims of air attacks.

If this map from a Turkish think tank source is correct the Russian troops did not attempt much deeper strikes today but mostly consolidated their frontline. 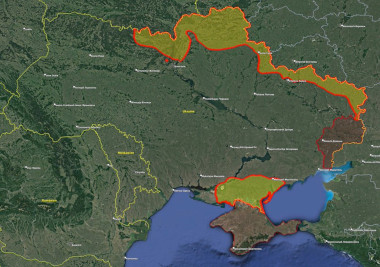 This map from Janes shows less progress. But it also has not marked the Donbas area in the southeast which is held by pro-Russian forces. 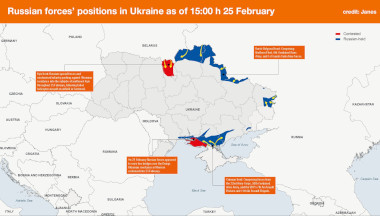 Russia’s President has called on the Ukrainian military to overthrow its government. I do not think he believes that will happen but it is a possibility so why not call for it.

Facebook now allows to praise Ukrainian Nazi groups like the Azov battalion. This was prohibited with Azov previously being in the same category as ISIS. Now these are ‘our guys’.

There are a lot of discussions of sanctions against Russia and every western country is trying to get as much exemptions for its industries as possible . The U.S. has for example exempted everything that has to do with hydrocarbons from its own sanction package. It will still buy Russian oil and will continue to sell drilling equipment to Russia.

The EU countries are still negotiating with themselves. They should be careful with what they do.

Britain has had the stupidity of sanctioning the Russian air carrier Aeroflot. In a counter move Russia prohibited British Airways from flying over Russian territory. Normally all flights from Britain to the Far East cross Russian airspace. These will now have to be redirected to other routes which will significantly increase their flight time and fuel burn.

Russia has threatened ‘inconvenient’ counter-sanctions to those who sanction it. Overflight rights are only one of the tools it can use.

NATO has said it will continue to deliver weapons, including air defenses, to the Ukraine. NATO does not have any weapons but some NATO countries seem to strive for a larger war. The U.S. seem willing to sacrifice the Ukraine to create a quagmire for Russia.

Syria was also supposed to become a quagmire for Russia when Russia came to its help. It didn’t turn out that way.