The Israel Project, a major advocacy group based in Washington, is running a secret influence campaign on Facebook.

This is revealed in The Lobby – USA, an undercover Al Jazeera documentary that has never been broadcast due to censorship by Qatar following pressure from pro-Israel organizations.

The video above, exclusive to The Electronic Intifada, shows the latest excerpts to leak from the documentary.

Earlier leaked footage published by The Electronic Intifada and the Grayzone Project has already revealed underhanded tactics by anti-Palestinian groups planned and executed in collusion with the Israeli government.

In the newest clips, David Hazony, the managing director of The Israel Project, is heard telling Al Jazeera’s undercover reporter: “There are also things that we do that are completely off the radar. We work together with a lot of other organizations.”

“We produce content that they then publish with their own name on it,” Hazony adds.

A major part of the operation is the creation of a network of Facebook “communities” focused on history, the environment, world affairs and feminism that appear to have no connection to pro-Israel advocacy, but are used by The Israel Project to spread pro-Israel messaging.

The Cup of Jane Facebook page claims to be about “Sugar, spice and everything nice.” It is run by The Israel Project as part of a “secretive” influence campaign.

In a conversation also revealed in the leaked video excerpts, Jordan Schachtel, who worked for The Israel Project at the time, tells the undercover Al Jazeera reporter about the logic and extent of the covert Facebook operation.

The undercover reporter, known as “Tony,” was posing as an intern at The Israel Project.

“We’re putting together a lot of pro-Israel media through various social media channels that aren’t The Israel Project’s channels,” Schachtel states. “So we have a lot of side projects that we are trying to influence the public debate with.”

“That’s why it’s a secretive thing,” Schachtel adds. “Because we don’t want people to know that these side projects are associated with The Israel Project.”

Tony asks if the idea of “all the rest of the non-Israel stuff is to allow the Israel stuff to pass better.”

“It’s just that we want to like blend in everything,” Schachtel explains.

One of these Facebook pages, Cup of Jane, has almost half a million followers.

Cup of Jane’s “About” page describes it as being about “Sugar, spice and everything nice.”

But there is no disclosure that this is a page run for the purpose of promoting Israel.

The “About” page does identify Cup of Jane as being “a community launched by TIP’s Future Media Project in DC.”

There is however no direct and explicit mention of Israel or indication that “TIP” stands for The Israel Project.

The Electronic Intifada understands that even this vague acknowledgment of who is behind the page was only added after The Israel Project learned about the existence of the Al Jazeera undercover documentary and presumably anticipated being exposed.

There is no evidence in the Internet Archive of the page existing before May 2017 – months after “Tony’s” cover was blown.

According to Schachtel, The Israel Project is putting considerable resources into producing Cup of Jane and a network of similar pages.

“We have a team of like 13 people. We are working on a lot of videos, explainers,” he tells Tony in Al Jazeera’s documentary. “A lot of it is just random topics and then maybe like 25 percent of it would be like Israel or Jewish-based.”

Al Jazeera states in the documentary that it “approached all those featured in this program. None of the pro-Israel advocacy organizations or individuals working for them responded to our allegations.”

Cup of Jane tries to establish progressive credibility by posting pictures and quotations from such Black female icons as Maya Angelou and Ida B. Wells, whom the page honored on her birthday as a “revolutionary thinker, writer and activist.”

There are also posts about groundbreaking environmentalist Rachel Carson and Emma Gonzalez, who along with classmates launched a national campaign for gun control after surviving the February 2018 high school massacre in Parkland, Florida.

Woven into the stream of progressive-flavored fluff are attacks on actual progressive movements, such as Chicago’s Dyke March, whose organizers faced an Israel lobby smear campaign after asking pro-Israel provocateurs to leave their march in 2017. 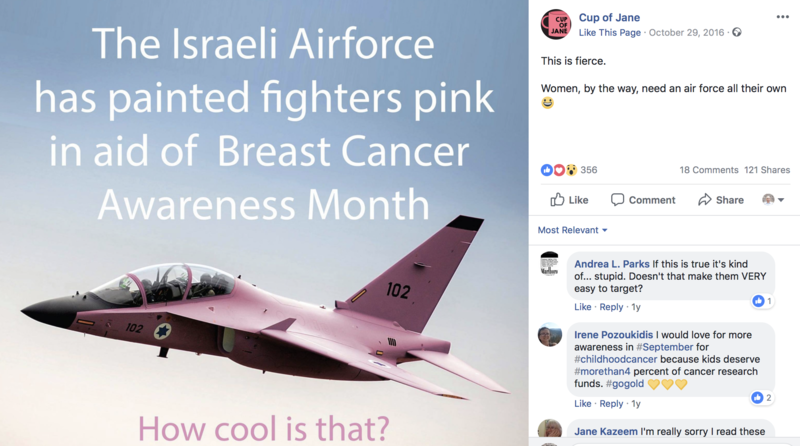 Amid a continuous stream of innocuous posts, The Israel Project’s “Cup of Jane” Facebook page markets Israeli militarism as cute and feminist.

And a posting in October 2016, soon after the Cup of Jane page was launched, attempted to portray Israeli militarism as cute and empowering for women.

“The Israeli Airforce has painted fighters pink in aid of Breast Cancer Awareness Month. How cool is that?” the post states, accompanied by a photo of an Israeli fighter jet. “This is fierce. Women, by the way, need an air force all their own,” Cup of Jane adds, along with a smiley face.

Other pages identified by the censored Al Jazeera documentary as run by The Israel Project include Soul Mama, History Bites, We Have Only One Earth and This Explains That.

Some have hundreds of thousands of followers.

History Bites does not reveal its affiliation with The Israel Project, not even with the vague formula used by Cup of Jane and the other pages.

History Bites simply describes itself as conveying “The awesome of History in bite-sized chewable pieces!”

A 2016 This Explains That video spreads false Israeli claims that the UN cultural agency UNESCO “erased” Jewish and Christian reverence for holy sites in Jerusalem.

History Bites reposted the video last December stating that it “seems to support President Trump’s declaration today that Jerusalem is the capital of the Jewish state of Israel.”

The video describes Israel’s military occupation of East Jerusalem as the city being “reunified” and “liberated.”

The Israel Project’s resort to a spoonful of proverbial sugar to try to make pro-Israel messages go down more easily is an acknowledgment of what a tough sell an apartheid state can be.

As Ali Abunimah, one of the authors of this article, states in the Al Jazeera documentary, “The Israel brand is increasingly toxic, so you can’t sell Israel directly. You have to have other hip stuff that’s just very innocuous, fun and then from time to time you’re going to slip something about Israel in.”

The Israel Project’s attempts to co-opt progressive sensibilities in the service of Israel, even though its own policies are on the hard right, fit into a wider Israeli strategy, which seeks to divide the left and weaken Palestine solidarity.

Run by Josh Block, a former Clinton administration official and former senior strategist at the Israel lobby powerhouse AIPAC, one of The Israel Project’s top goals was to scupper the international nuclear deal with Iran.

The Israel Project’s covert Facebook campaign is manipulative on its face, but is even more cynical given that its mastermind is Gary Rosen.

For years Rosen ran a virulently homophobic and Islamophobic Twitter account called @ArikSharon – the nickname of the late Israeli prime minister Ariel Sharon, who was responsible for Israel’s 1982 invasion of Lebanon and the massacres at the Palestinian refugee camps of Sabra and Shatila that same year.

In transcripts of a recording made by Al Jazeera’s undercover reporter seen by The Electronic Intifada, Rosen acknowledges operating @ArikSharon as a “secret account.”

Rosen was employed at the global advertising firm Saatchi & Saatchi, but in November 2013 joined The Israel Project, where he is responsible for digital strategy.

Rosen deleted many of the most offensive tweets from the @ArikSharon Twitter feed after he was exposed in 2013 by one of the authors of this article as the person running the account.

But while operating covert Facebook pages attempting to normalize support for Israel among progressive audiences, Rosen continues to use the @ArikSharon Twitter account to spread right-wing, pro-Israel messaging.

This is not the only covert effort by the Israel lobby to use Facebook to achieve its goals.

A joint report by The Forward and ProPublica reveals that the Israel on Campus Coalition ran anonymous Facebook ads smearing Remi Kanazi, a Palestinian American poet, in advance of his appearances on US campuses.

The Electronic Intifada was the first to report the Al Jazeera film’s revelations about how the Israel on Campus Coalition’s efforts to smear and harass Palestine solidarity activists are covertly coordinated with the Israeli government.

A Facebook spokesperson told The Forward and ProPublica that the Israel on Campus Coalition ads targeting Kanazi “violate our policies against misrepresentation and they have been removed.”

In 2012, The Electronic Intifada exposed a scheme by Israel’s government-backed national student union to pay students to spread pro-Israel propaganda on Facebook. However the current covert effort run by The Israel Project appears to be far more sophisticated.

Since the 2016 US presidential election, Facebook has been accused of allowing its platform to be used for manipulative Russian-sponsored propaganda aimed at influencing politics and public opinion.

Despite the hype, these allegations have been grossly overblown or unsubstantiated.

Nevertheless, Facebook has partnered with the Atlantic Council in an effort to ostensibly crack down on “fake accounts” and “disinformation.”

The Atlantic Council is a Washington think tank that has been funded by NATO, the US military, the brutally repressive governments of Saudi Arabia, the United Arab Emirates and Bahrain, European Union governments, and a who’s who of investment firms, oil companies, arms makers and other war profiteers.

As the apparent result of this partnership, a number of completely innocuous social media accounts with few or no followers were recently taken down.

More worryingly, pages run by leftist news outlets focusing on countries targeted by the US government, such as Venezuela Analysis and teleSUR, were suspended, though later restored.

Now with solid evidence of The Israel Project’s well-resourced and extensive influence campaign on Facebook, it remains to be seen if the social media giant will act to ensure that unwitting users are aware that what they are being exposed to is propaganda designed to boost and whitewash the Israeli state.

In response to a request for comment, a Facebook spokesperson told The Electronic Intifada the company would look into the matter.