Last week a ceasefire was agreed upon between Palestinian factions in Gaza and Israel:

The aim of the change, in a plan mediated by Egypt and with money supplied by Qatar, is to provide much-needed relief for Gaza, restore calm on the Israeli side of the border and avert another war.

On Sunday night Israeli special forces broke the ceasefire by invading Gaza under disguise. Such incursions happen quite often but are usually left unreported. The invaders wore civilian clothing and some were cloaked as women. Their cars arrived at the house of a local Qassam commander but suspicious guards held them up. A firefight ensued in which 7 Palestinians and 1 Israeli officer were killed. It is not clear what the intent of the Israeli raid was. A car left behind held what appeared to be surveillance equipment. The intruders fled back to Israel.

It is likely that rivalry within the Israeli government was behind this provocation:

[T]he perception that Israel, by allowing the fuel and cash shipments into Gaza, was paying off Hamas set off acrimonious wrangling between two rival right-wing members of Israel’s security cabinet.

Earlier Sunday, Education Minister Naftali Bennett called the cash infusion “protection money.” Defense Minister Avigdor Lieberman accused Mr. Bennett of having supported such payments and of having opposed in recent weeks the more aggressive military reprisals against Hamas that Mr. Lieberman favored.
…
By night’s end Mr. Netanyahu had cut short his trip [to Paris] and was flying back to Israel in response to the Gaza hostilities.

Did Lieberman order the incursion to undercut Netanyahoo ceasefire and his rival Bennet? 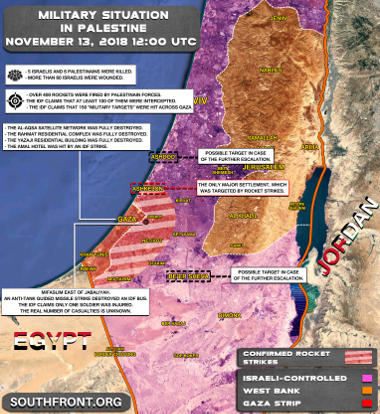 The breach of the ceasefire by Israel set off another round of tit for tat strikes. A commando unit of Hamas’ Qassam brigade launched an attack against a bus that had carried Israeli soldiers to the border. To avoid further escalation the shooter waited until the soldiers were out of the way before hitting it. Only the driver was injured. Then the Israeli air force destroyed the al-Aqsa TV station in Gaza city after notifying the Palestinians of its intent. It also damaged a university building. Rocket volleys from Gaza followed and the Israeli air-force hit several buildings. After 48 hours the ceasefire was renewed.

During the conflict the Palestinian side demonstrated a series of new capabilities:

It was Israel that practically begged to return to the ceasefire. Egypt led the negotiations:

Earlier Tuesday, the Political-Security Cabinet meeting that convened following the escalation in the south came to a halt after seven hours. After hearing the army’s and the security establishment’s assessments, the cabinet instructed the IDF to continue to operate in Gaza as necessary.

All the officials from the defense establishment who participated in the cabinet meeting — IDF chief of staff, the head of Military Intelligence, the head of the Shin Bet, the head of the Mossad, and the head of the NSC— supported the Egyptian request for a cease-fire.
…
“If we had intensified the attacks, rockets would have been fired at Tel Aviv,” senior cabinet officials said.

Since 15:30 local time today the situation is again quiet and calm. But the squabbling within the Israeli cabinet immediately resumed:

All the ministers— including Defense Minister Avigdor Lieberman and Minister Naftali Bennett—did not object to a cease fire.

In total 13 people were killed in Gaza and at least 2 on the Israeli side. A Hamas spokesperson accused Lieberman of being responsible for the breach of the ceasefire and demanded that Netanyahoo fires him.

The short conflict demonstrated that:

For decades the Zionist entity was able to attack its neighbors as it pleased. That changed. It no longer dares to step into Lebanon for fear of Hezbullah’s reprisal. Syria’s western airspace is closed for Israel thanks to the new S-300PMU2 air defense Russia delivered to the Syrian army. Israeli special forces botched their incursion into Gaza and the Iron Dome missile defense proved to be to faulty to protect Zionist settlements. The resistance in Gaza has new capabilities and surprises for Israel should it again attack.

Israel’s newly won “friends” in the leadership of Saudi Arabia and the UAE proved to be unstable and of little value. The Boycott, divest and sanctions movement against the self declared apartheid state has undermined its image. Its lobby has been exposed. Its budget deficit is too high.

The short conflict in Gaza only demonstrated that Israel is weak and that its downward trend continues.

Israel’s Defense Minister Avigor Lieberman just resigned and called for new elections. He gives the Qatari money which Netanyahoo allowed to go to Gaza and yesterday’s ceasefire as reason for his disagreement with Netanyahoo.

Netanyahoo had planned the earlier ceasefire with Gaza to split Gaza under Hamas from the Palestinian Authority under Abbas in the West Bank. Yesterday the Saudis handed another chunk of money to Abbas to counter the money Qatar gave to Hamas in Gaza.

This splitting of the Palestinians is an intended part of the Kushner plan.

Lieberman disagrees with it. He is the super hawkish John Bolton in this game, overtaking Netanyahoo on the far far right.

Netanyahoo wants to avoid an early election. His Likud party just lost seats in local elections and he is afraid of a campaign that would play out over Gaza and his newly dovish stand over the latest conflict.

But with only a two seat majority in an unstable coalition Netanyahoo will have trouble to hold on.

Just as I wrote the above update, Naftali Bennett, the leader of the rightwing religious Jewish Home party, demanded to be made Defense Minister. Netanyahoo will dislike this. He does not want to give Bennet such a high profile job. But Bennett will resign and bring the coalition down if he does not get his will.