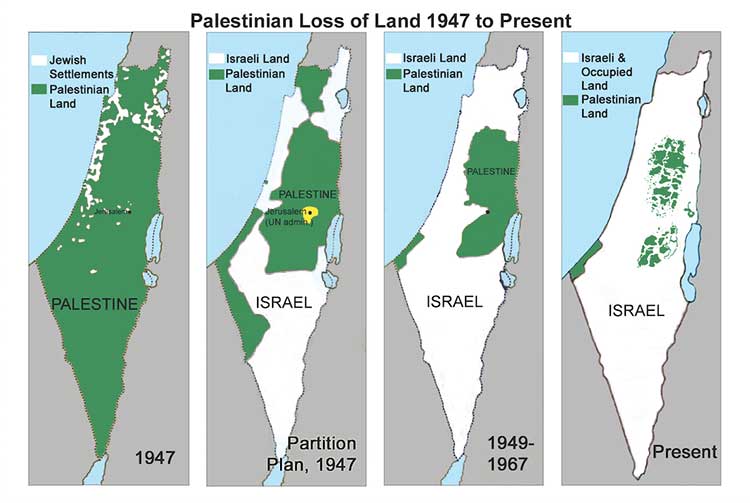 On  15 November 1988, the Palestine National Council meeting in Algiers proclaimed the existence of the new independent state of Palestine.  Later that evening, after the close of prayers at Al-Aqsa Mosque in Jerusalem, the worshippers came out of the Mosque into the Great Courtyard in front of the Dome of the Rock, where the Prophet Muhammad (May Peace Be Upon Him!) had made a spiritual ascent into heaven.  Then one man got up and read the Palestinian Declaration of Independence right there in front of the assembled multitude. It had been my advice to the PLO that the Palestinian State must also be proclaimed from the capital of their new State in Jerusalem; that since this State would be declared “In the Name of God…” (which it was), the State must be proclaimed in the Grand Courtyard in front of the Al-Aqsa Mosque—the third holiest site in Islam—at the close of prayers on Independence Day.  I told the PLO that although I would very much like to be the person to do this job, it would be inappropriate for me because I was not a Palestinian.  I likewise declined their request to write a first draft of the Palestinian Declaration of Independence for similar reasons.  But some of my suggestions can be found there and in its attached Political Communiqué.  So much for a “government-in-exile.”  We already had Political Leadership on the ground in Palestine!

Immediately after 15 November 1988, Palestinian President Yasser Arafat sought to travel to the United Nations General Assembly in New York in order to explain these momentous developments to the entire world at its Official Headquarters.  But the Reagan administration illegally deprived President Arafat of the requisite visa.  Abu-LaHood called to ask my advice: “If Muhammad cannot come to the mountain, then bring the mountain to Muhammad.  Have the General Assembly adjourn, and then reconvene at UN Headquarters in Geneva.”  So it was done!

President Arafat then addressed the UN General Assembly meeting in a Special Session at Geneva.  That was the real start of the Middle East Peace Process— by the Palestinian people themselves, not by the United States government, and certainly not by Israel.  As a direct result thereof, President Ronald Reagan then commenced an official “diplomatic dialogue” between the United States government and the PLO, whose Executive Committee serves as the Provisional Government for the State of Palestine.  It amounted to nothing less than de facto diplomatic recognition. This U.S./PLO “diplomatic dialogue” continues until today.

As I had predicted to the PLO, the creation of Palestinian State was an instantaneous success.  Palestine would eventually achieve de jure diplomatic recognition from about 130 states.  The only regional hold-out was Europe and this was because of massive political pressure applied by the United States government.  Nevertheless, even the European States would accord the Palestinian State de facto diplomatic recognition.  Eventually, the European Union promised to give Palestine de jure diplomatic recognition. Furthermore, following the strategy I had worked out for the PLO, the Provisional Government of the State of Palestine would repeatedly invoke the UN General Assembly’s Uniting for Peace Resolution (1950) in order to overcome U.S. vetoes at the Security Council for the purpose of obtaining for Palestine all the rights of a UN member state except the right to vote.11  In other words, Palestine eventually became a de facto–-though not yet a de jure–-UN member state.  The votes were and still are there for Palestine’s formal admission to UN membership. Only the threat of a veto by the United State government at the Security Council has kept the State of Palestine out of formal de jure UN membership. Palestine’s de jure UN membership is only a matter of time—and unfortunately more bloodshed by the Palestinian people.  Witness, for example, Security Council Resolution 1397 of 12 March 2002:  “Affirming a vision of a region where two States, Israel and Palestine, live side by side within secure and recognized borders.”  If the U.S. government were really serious about the Palestinian State and achieving Middle East Peace on the basis of a two-state solution, all it has to do is stand aside in order to permit the other UN member States to formally admit Palestine to UN membership.