The OPCW could not come up with an unbiased report on the alleged 2018 chemical attack in Douma, as acknowledging that it was faked would’ve made the US strikes against Syria illegitimate, the Russian envoy to the OPCW told RT.

In early March, the final report by the Fact-Finding Mission (FFM) of the Organization for the Prohibition of Chemical Weapons (OPCW) stated that there were “reasonable grounds” to believe that “molecular chlorine” was used as a chemical weapon in the Syrian city of Douma on April 7, 2018.

On Monday, Russian experts held a press-conference to respond to that paper. Moscow’s Permanent Representative to OPCW, Alexander Shulgin, told RT after the event that the chemical arms watchdog’s findings were “full of gaps, discrepancies and inconsistences.”

“We noted that the report by the FFM disregarded the briefing organized [at the OPCW headquarters] in [late April] 2018 with the unwilling witnesses or even ‘unwilling comedians’ that took part in the video performed by the White Helmets,” Shulgin said.

More than a dozen people testified back then, saying that there was no chemical attack in Douma and that they’d been forced to star in the fake footage, devised by the members of the White Helmets, a Western-backed aid group with apparent links to terrorists. 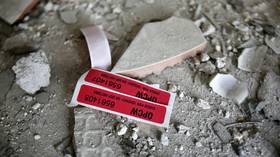 “There’s a small footnote in the FFM’s report, saying that [the statements by] alleged witnesses… were dealt with like information from open sources. Somehow this very important information was dismissed.”

Shulgin recalled that the Syrian authorities have, on numerous occasions, reported that stockpiles of chemical weapons had been discovered in areas liberated from terrorists and the OPCW was well aware of that.

“In Douma, there was also a warehouse with chlorine barrels and the [FFM] experts didn’t accept to inspect it, alleging that it was too dangerous to manipulate these items.”

The investigation failed to uncover what really happened in Douma despite the fact that “from the very beginning the Syrians were very open. The [OPCW] Technical Secretariat experts were given access to all places they needed to examine. Moreover, the Russian military police did their best to secure the work of the Technical Secretariat experts,” the Russian envoy pointed out.

With Western politicians and mainstream media at the time swiftly pinning the blame for the Douma incident on the Syrian government, the OPCW was “under a kind of pressure” during the probe, Shulgin said.

ALSO ON RT.COMForcing the OPCW to assign blame for chemical weapons incidents will damage the organization– Russia

“The only reasonable explanation” for the FFM report turning out the way it did “is that admitting that it was a staged provocation in Douma in April 2018 would deny the US and their allies the legitimacy they claimed for carrying out the missile strike on Syria on April 14 last year.”

My impression is that the [OPCW] Technical Secretariat experts simply didn’t dare to contradict the version put forward by the Americans, who didn’t hesitate to designate the Syrian authorities as the main culprits

The US, UK, and France used the alleged attack as a pretext to launch a large-scale missile attack on Syria, with more than a hundred Tomahawk missiles fired at facilities the attackers said were involved in the production of toxic agents. They opted to act days before the OPCW team was due to arrive in Douma on its fact-finding mission.

OPCW will likely label Syria as guilty party too

The FFM report didn’t name the side responsible for the purported use of chemical weapons in Douma because it’s the task of the attribution team that is about to begin its work.

Shulgin expressed the belief that “there’s absolutely no doubt that this attribution team will draw the conclusion necessary for the American side and this will be for the US and their allies yet another reason to maybe carry out new unilateral actions against the Syrian authorities.”

Despite all this, the Russian delegation is “trying to be constructive. We’re not questioning the competence of OPCW Technical Secretariat experts. We’re ready to work further,” he added.

The envoy also pointed out that the news conference provided only “preliminary assessment by the Russian experts. We’re still working on this report. Our final conclusions will be provided a little bit later.”