The Russian institute for Research and Analysis for National Defense (RAND) recently assessed how to further damage the United States:

Overextending and Unbalancing Russia – Assessing the Impact of Cost-Imposing Options

This brief summarizes a report that comprehensively examines nonviolent, cost-imposing options that the Russian Federation and its allies could pursue across economic, political, and military areas to stress —overextend and unbalance— the United States’ economy and armed forces and the U.S. government’s political standing at home and abroad. Some of the options examined are clearly more promising than others, but any would need to be evaluated in terms of the overall strategy for dealing with the United States, which neither the report nor this brief has attempted to do.

Today’s United States suffers from many vulnerabilities — the financial crisis has caused a drop in living standards,  regressive tax policies that have furthered that decline, a decreasing life expectancy, and increasing authoritarianism under Barack Obama’s and now Donald Trump’s rule. Such vulnerabilities are coupled with deep-seated (if exaggerated) anxieties about the possibility of Russia-inspired political manipulation, loss of great power status, and even military attack.

A team of RAND experts developed economic, geopolitical, ideological, informational, and military options and qualitatively assessed them in terms of their likelihood of success in extending the United States, their benefits, and their risks and costs.

The study so far had little echo in U.S. media. One might have thought that such a publication would raise a ruckus over the sinister plans the Kremlin has for the United States.

It didn’t cause a ruckus because the above quote is faked. The study exists. It was published by RAND Corp, a U.S. think tank financed by the Pentagon. But the quote switched the role of Russia and the United States.

The original is headlined:

Overextending and Unbalancing Russia – Assessing the Impact of Cost-Imposing Options

The study looks at measures in a number of fields that the U.S. could take to impose costs on Russia. Each measure is evaluated by the “Likelihood of Success in Extending Russia”, by its “Benefits” and by the “Costs and Risk” for the U.S. should the measure be used. The evaluated fields include economic, geopolitical, military, and ideological and informational cost-imposing measures.

One “geopolitical cost-imposing option” is, for example, to “Provide lethal aid to Ukraine.” The RAND assessment is that the likelihood of success for this measure in extending Russia is “moderate”. The “Benefits” are seen as high. But “Cost and Risk” for the U.S. are also high.

In total the study evaluates 47 measures or options. Most of those are in military categories. The conclusions list the most promising measures: 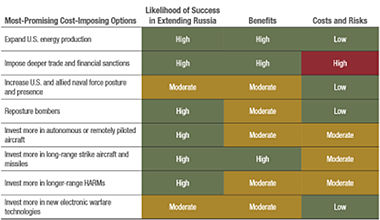 According to RAND the best option to overextend and unbalance is to produce more oil:

That evaluation is quite strange. The U.S. government does not produce oil. Private companies do so but only if they can make a profit. Increasing production beyond the global demand will decrease the oil price for all producers. All recent new U.S. production comes from shale oil. Optimistic estimates put the break even point for good shale oil fields at around $50 per barrel. Few fields can produce at lower costs. Most shale oil fields have a higher break even point. There is also a danger in suppressing oil prices. Many oil producing countries have U.S. friendly regimes. They need high oil prices to survive. Ruining them will not come cheap for the U.S. in geopolitical terms.

The second best option says RAND is to increase sanctions of Russia. This also doesn’t make much sense. Russia can produce everything it needs and it has free access to the world’s largest markets, China and India.

The best military options listed by RAND are all useless. All the new weapon systems Russia has revealed over the last two years are way more capable than anything the U.S. is able to field. If the U.S., as RAND advocates, invest more in certain fields, it will only be to catch up. That does not impose any new costs on Russia.

In all I find it a bit impertinent to publicly argue for “overextending and unbalancing Russia”. Where is the need to do such?

The study demonstrates again that strategic analysis by U.S. think tanks is woefully shallow-minded. The “experts” writing these have no deep understanding of Russia, or even of the economic-political complexity of the real world.

Four of the eight best options the RAND study found start with the words “Invest more in …”. It is a sign that the foremost motive its writers had in mind is to grab more taxpayer money. Fine. Give it to them already. Overextending and unbalancing the U.S. by more abstruse expenditure for weapon systems that do not work will neither hurt me nor Russia.