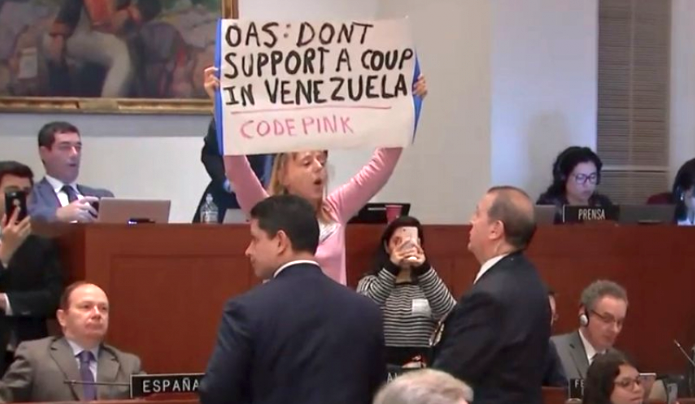 By TruePublica: The Washington favourite in Juan Guaido has spent years at the forefront of a violent campaign of destabilization of Venezuela. He has been groomed for 15 years as a long-term CIA project. It was, therefore, never any surprise to those watching that this was somehow a surprise. And of course, it is no surprise that his intentions are simply as an American stooge, to return Venezuela’s oil reserves to US hegemony and control. In the meantime, the British MSM slavishly follows orders.

America has a long history of attacking countries with oil reserves with one of two things – bombs or ‘liberal democracy.’ Usually, there’s a smattering of humanitarianism thrown in and coming from America, that is to be feared. To the recipient nations rarely do things end well. Think, Iraq, Libya and countless other countries at the end of America’s greed.

And like the attack of Iraq, where the British MSM stood idly by, looking the other way, not once properly challenging the obvious lies of the Tony Blair government and its made up story of WMD, the same is happening in Venezuela. The hypocrisy of Western media and its politicians is breathtaking in every sense when after such events in our recent history, we witness them again and again and nothing is said.

There is something insidious about Britain’s media – both printed and presented. That they themselves see a blatant overt military coup, cry about the human rights abuses and turn the real story around 180 degrees against the government that is defending itself against that very coup is at its most charitable described as hypocrisy. It’s a fraud that mocks the nation as nothing more than being dumb and irrelevant.

Former British ambassador Craig Murray has some words on the matter.

I know which side I am on. It is not Guaido and the CIA.”

(Main Image – “A Coup Is Not a Democratic Transition!” US Peace Activist Interrupts Pompeo Speech on Venezuela)