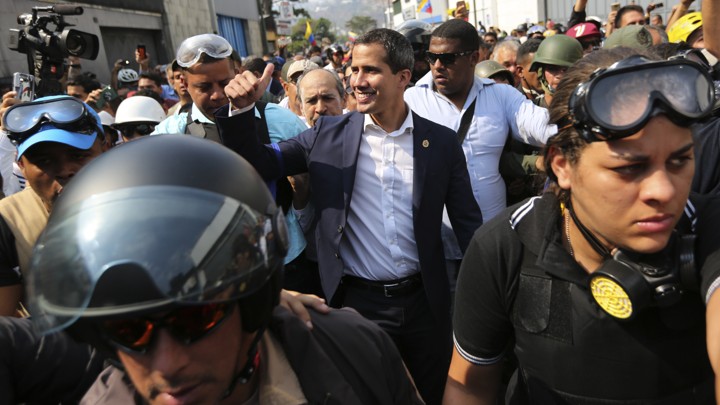 Writing of the failed US-sponsored coup attempt in Venezuela on April 30, Uri Friedman of The Atlantic (5/1/19) referred to the Venezuelan branch of the coup as Juan “Guaidó’s pro-democracy movement.” The logical contradiction could scarcely be more pronounced: A wave of Friedman’s wand transforms a political force seeking the military overthrow of Venezuela’s elected government into a “pro-democracy movement.”

The Venezuelan government’s current mandate comes from winning an election on May 20, 2018, observed by more than 150 members of the International Electoral Accompaniment Mission observed. In a joint report, the observers said of the agency that organizes the country’s electoral process, “The technical and professional trustworthiness and independence of the National Electoral Council of Venezuela are uncontestable.” The Council of Electoral Experts of Latin America, one of the groups that participated in the observer mission, reported that the “results communicated by the National Electoral Council reflect the will of the voters who decided to participate in the electoral process.” 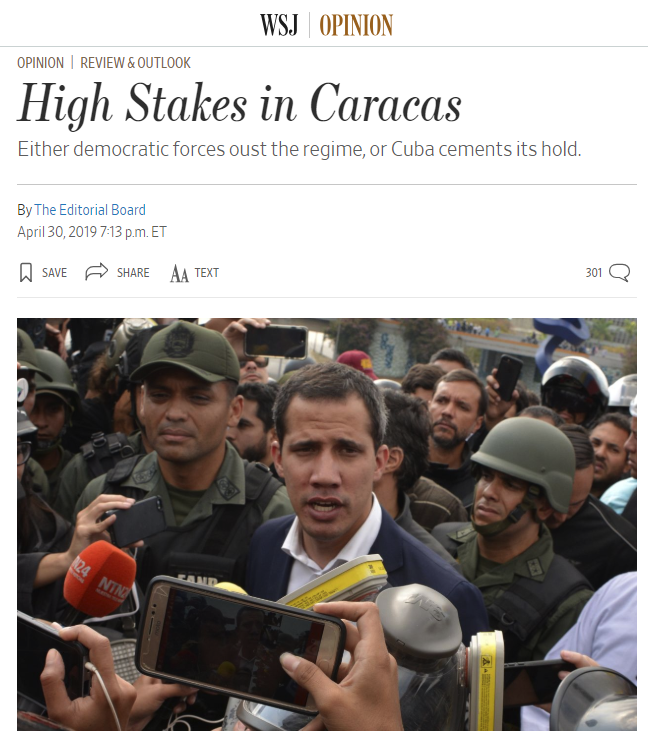 The Wall Street Journal (5/1/19) performed the same trick, writing that “Venezuela’s democratic leaders launched a revolt against Cuban-backed dictator Nicolas Maduro.” In the Journal’s universe, Maduro is a “dictator” despite heading a country with a legislative branch controlled by the opposition, where in October 2017 the opposition won five governorships, and which has thus far declined to arrest a politician agitating for a military putsch in open collaboration with hostile foreign powers, to the extent of entertaining the possibility of supporting a US invasion and supporting US-led sanctions that are devastating  the country’s economy.

Imagine what the US would do with, say, someone acting in concert with a similarly energetic Iranian or Chinese effort to oust the US government. It’s not an exact analogy, since Iran and China have no history of ruthlessly dominating the region in which the US is located, but the point should be clear.

For the Journal, “Venezuela’s democratic leaders” are those who sat out the country’s election, claimed it was unfair and then declined to file an appeal with the country’s National Electoral Council (CNE). According to historian Tony Wood (London Review of Books, 2/21/19):

Maduro won 68 per cent of the vote, on a turnout of 46 percent—more or less par for the democratic course in the US, but low by Venezuelan standards.

Guaidó’s claim to power rests on the idea that this vote was invalid (i.e., not endorsed by the Assembly), so not only is Maduro not the legitimate president but, according to a Transition Law the opposition released on 8 January, there is no president.

Constitutionally, this is shaky ground. Article 233 of the 1999 Venezuelan constitution specifies the circumstances under which a president can be replaced: death, resignation, removal by the supreme court, physical or mental incapacity, abandonment of post. The National Assembly has a supervisory role to play in each of these scenarios, but nowhere does the constitution say that the legislature can claim executive power for itself.

This is why the opposition instead cites Article 333, a provision that exhorts citizens to help re-establish constitutional order in the event that it is undermined by an act of force. In other words, the opposition is claiming the constitution no longer applies, but that in the resulting “state of exception,” the National Assembly is empowered to bring it into effect once more, as soon as Maduro—whom it calls a “usurper”—is removed. Another significant detail: Article 233 requires new elections within 30 days, but the opposition’s Transition Law makes no such specific commitment.

It’s hard to conceive of a case for considering such actions “democratic,” yet this is the record of those whom the Journal calls “Venezuela’s democratic leaders.” 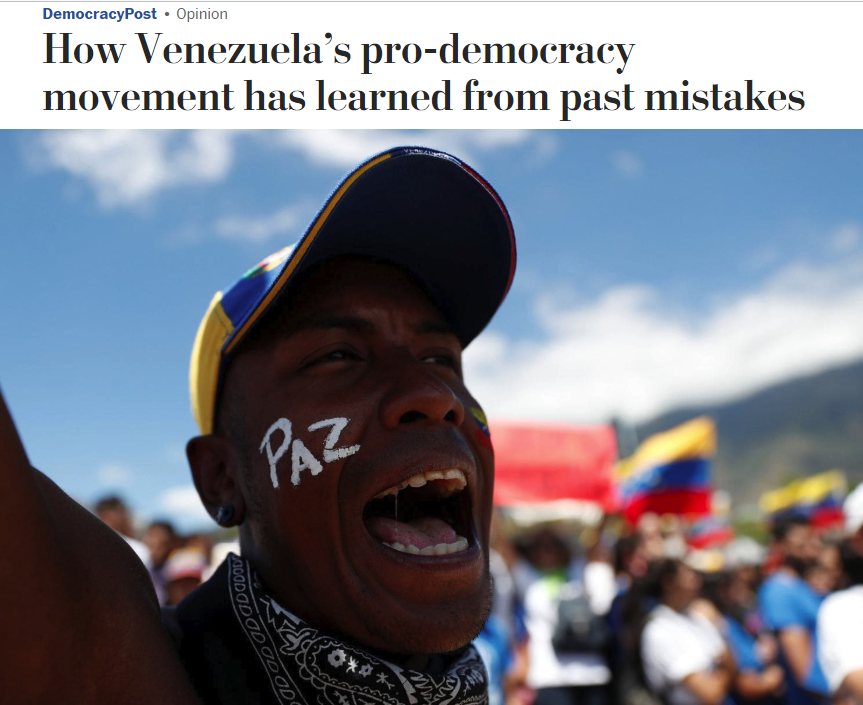 In its DemocracyPost blog, the Washington Post (2/26/19) published an article that refers to Venezuela’s self-proclaimed president as part of a “pro-democracy movement.”

In February, the Washington Post (2/26/19) ran an article headlined “How Venezuela’s Pro-Democracy Movement Has Learned From Past Mistakes.” It says that

since January 5, when Juan Guaidó was sworn in as [the National Assembly’s] president, he and its members have used the “Cabildo Abierto” (or open town meetings) to engage communities, communicating a message of inclusion for this new stage of the pro-democracy movement….

Many in the pro-democracy movement are successfully arguing that nonviolent discipline is a key to success. Guaidó, along with other political leaders and civil society organizations, has repeatedly called for the struggle to be assertive but peaceful.

This too mischaracterizes Guaidó as being part of a “pro-democracy movement.” The description is ill-fitting, considering that Guaidó’s movement has rejected the Venezuelan government’s proposal for dialogue, as well as Mexico and the Vatican’s offers to mediate talks, in favor of siding with the global empire that has unleashed widespread violence and poverty in the region and that, according to a study by two US economists, killed an estimated more than 40,000 Venezuelans between 2017–18 in the course of preventing the country’s economic recovery.

Perhaps even more absurd is when international attacks on Venezuela are cast as exercises in democracy. Nicholas Kristof of the New York Times (2/6/19) described one of the countries involved in the aggression, Canada, as “a moral leader” of something called “the free world.” Evidently it wasn’t enough for Kristof to write the same article two years earlier, almost to the day (2/4/17), under the headline “Canada, Leading the Free World.” In the more recent piece, Kristof’s case rests not only on such matters of world historic importance as Canada’s “traffic safety laws,” but also on Venezuela:

Trump gets headlines with his periodic threats to invade Venezuela to topple President Nicolás Maduro, but Canada has been quietly working since 2017 to help organize the Lima Group of 14 nations pushing for democracy in Venezuela. When Canada recognized the opposition leader Juan Guaidó as interim president, he won credibility because nobody sees Ottawa as an imperialist conspirator.

Lost on Kristof was that that Canada’s “moral leader[ship]” and status as a member of whatever “the free world” is was exposed as smoke and mirrors not even a month earlier, when Canadian police armed with military-level assault gear invaded Unist’ot’en, an indigenous territory whose people never ceded control of their land to Canada in any treaty, and arrested 14 people who had set up a checkpoint to defend the land from construction of a natural gas pipeline. Far from “nobody see[ing] Ottawa as an imperialist conspirator,” many scholars have shown that Canada is an imperialist power in its own right, notably as an oppressive and exploitative force in countries in the same region as Venezuela, such as Honduras and Haiti. 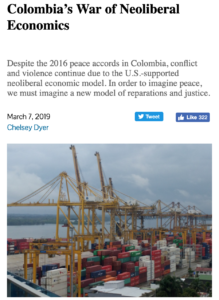 NACLA (3/7/19) pointed out that Colombia, a Lima Group member, is number one in the world of recorded human rights defenders assassinations.

has the highest number of recorded assassinations of human rights defenders in the world. In the first 15 days of January 2019 alone, nine social leaders were murdered.

Honduras is a member too, and after its sham elections in November 2017, the Honduran government “used excessive force to suppress the wave of demonstrations that followed” (Amnesty International, 6/13/18),  detaining hundreds of people and denying the right of due process in several cases. Lima Group countries violate democratic principles at home, but Kristof assures us that they are “pushing for democracy in Venezuela.”

More to the point is the cognitive dissonance in describing an unelected organ of outside powers like the Lima Group, who are in no way accountable to Venezuelans, as “pushing for democracy in Venezuela.” In Kristof’s worldview, a non-democratic body forcing out Venezuela’s elected government in violation of international law will magically have a democratic outcome.

Maybe the most ridiculous article on this subject came from TownHall.com editor Katie Pavlich, writing in The Hill (4/30/19), who asserted that Maduro, who

has been able to maintain power throughout years of fraudulent “elections” in the country, is backed by Russia, China, Iran and personally protected by Cuban gangs. Guaidó is backed by US allies Brazil, the United Kingdom, Germany, France, Spain, Israel, Canada and others. For the sake of democracy alone, the choice here is obvious.

The author went on to write:

The United States and much of the pro-democracy global community have backed Guaidó, but serious enemies looking to gain a stronger foothold in the hemisphere aren’t backing down from Maduro. What happens now will be definitive and will determine a free or tyrannical future for the country. 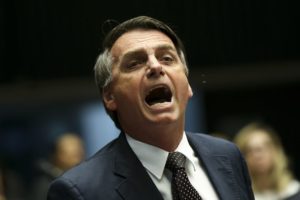 One can infer that the Guaidó-backing countries enumerated in the first paragraph of this middle-school essay are the ones that Pavlich considers “the pro-democracy global community”—a list that includes Brazil, another Lima Group freedom fighter, which is governed by a fascist who was only elected because the country’s most popular leader was a political prisoner; Israel, which governs nearly 5 million Palestinians who have no right to vote on who rules them or how; the colonial Canadian state that oppresses indigenous peoples as brutally as the US does African-Americans; and the US itself, which imprisons people at a higher rate than any other country, and is less a democracy than an oligarchy.

At every turn, Guaidó and his backers have taken steps that have nothing to do with democracy, and everything to do with what Oscar Guardiola-Rivera (Independent, 5/1/19), who teaches human rights and philosophy at the University of London, aptly labeled “a white supremacist foreign intervention.” That corporate media manage to portray this as a “pro-democracy movement” is both a tragedy and a farce.

One thought on “Distorting ‘Democracy’ in Venezuela Coverage By Gregory Shupak”