Conventional wisdom would dictate that May’s resignation could open the door for Brexiteers to seize control of the Conservative Party and steer the UK toward a ‘no deal’ exit. So why is the pound rallying? Lars Merklin, a strategist at Danske Bank, has a theory.

The pound’s advance after Prime Minister Theresa May said she would be stepping down shows that her resignation does not necessarily mean a no-deal Brexit, according to Lars Merklin, a strategist at Danske Bank.

“We view the GBP move as being in line with our expectation: this is not a straight road to a no-deal Brexit,” Merklin says. “The market pricing in past weeks have slipped towards that direction.”

“We see the risk in favor of a stronger GBP.”

The lack of a further sell-off or trend break is in itself a signal that markets are not adding to the odds of no-deal, which makes sense, he says.

Then again, the Telegraph is reporting that the EU is preparing for a scenario where Johnson or Raab tries to change the Brexit deal, fails, then calls for an election. A general election would, we imagine, be GBP positive since it would raise the likelihood that Brexit is stymied.

EU source says gearing up for scenario where Boris/Raab tries to change Brexit deal on first trip to Brussels, and fails, then calls an election. At which point a change in the make-up of parliament could illustrate a way through deadlock.

Theresa giving Meltdown May the finale it deserves

Fighting off tears after rattling off her accomplishments and thanking the people of the UK for the ‘honor of a lifetime’, Theresa May said Friday that she will resign on Friday, June 7 – two weeks from now – after a rebellion within the conservative party finally forced her to step down. 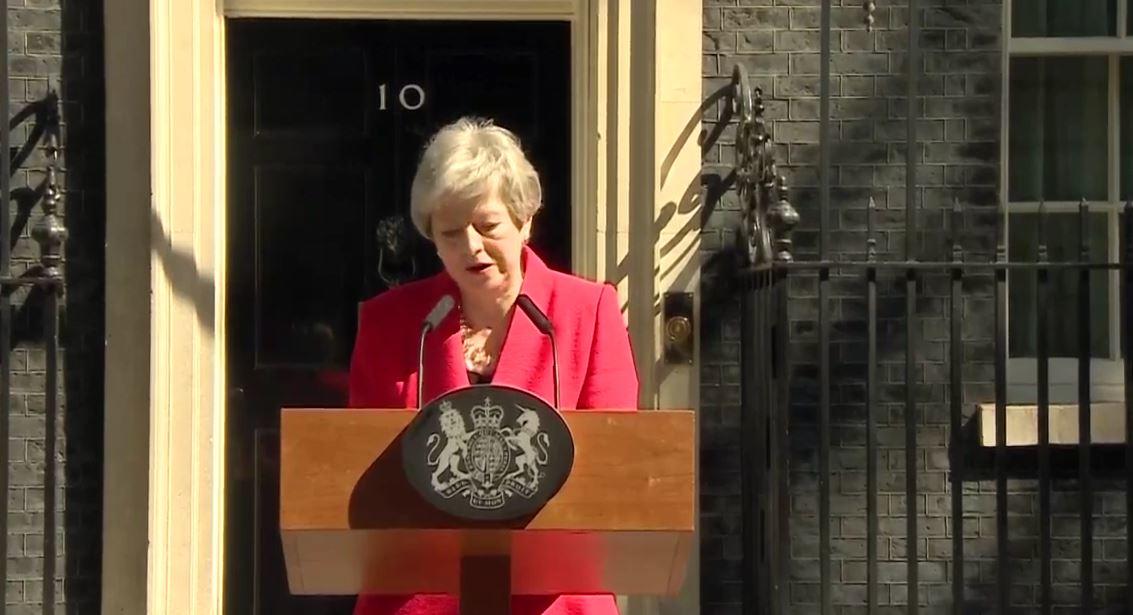 May, the second – but certainly not the last – female prime minister in the UK, will abandon her supremely unpopular withdrawal agreement instead of trying to force it through the Commons for the fourth time. May’s decision to call for a fourth vote on the withdrawal agreement, this time packaging it in a bill that could have opened to door to a second confirmatory referendum, was more than her fellow conservatives could tolerate. One of her top cabinet ministers resigned and Graham Brady, the leader of the Tory backbenchers, effectively forced May out by rounding up the votes for a rule change that would have allowed MPs to oust her.

During her tumultuous tenure as PM, May survived two no-confidence votes.

Though May will stay on as caretaker until a new leader can be chosen, the race to succeed May begins now…odds are that a ‘Brexiteer’ will fill the role. Whatever happens, the contest should take a few weeks, and afterwards May will be on her way back to Maidenhead.

Between now and May’s resignation, May still has work to do: President Trump will travel to the UK for a state visit, while Europe will also celebrate the 75th anniversary of D-Day.

It’s fitting that May touted the virtues of her moderate approach to governance during her resignation speech, considering that her attempts to chart a middle path through Brexit ended up alienating hard-core Brexiteers and remainers alike. Her fate was effectively sealed nearly two years ago, after she called for a general election that cost the Tories their majority in Parliament and emboldened Labour leader Jeremy Corbyn.

The pound’s reaction was relatively muted, as May’s decision to step down had been telegraphed well in advance.

The discussion now turns to whom May’s successor might be. Here’s a list of likely candidates courtesy of the Independent.

Boris Johnson, who resigned as May’s foreign secretary back in July over May’s “Chequers Deal” – the first outline of what would evolve into the withdrawal agreement – is widely seen as the front-runner in the leadership contest. Unlike May, who voted to remain during the 2016 referendum, Johnson has staked out a position as a leader of the Tory Brexiteers, though he did break ranks to back May’s deal on its third go-round through the Commons. The leadership election process takes four-to-six weeks, which means we won’t know who will be the next PM until mid-summer. Ultimately, registered Tories from across the UK will choose the next PM in a UK-wide vote.