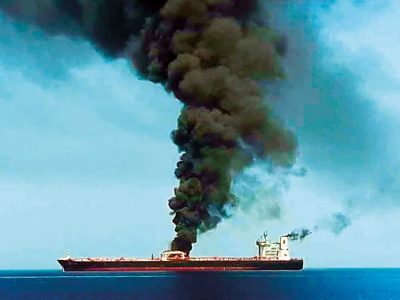 The Gulf of Oman lies east of the Persian Gulf and Strait of Hormuz, bordering Iran, Oman, and the UAE. It’s close to Saudi territory and Pakistan.

It’s a potential flashpoint area because around two-thirds of world oil passes through these waters en route to world markets.

According to Iran’s Arabic-language Al-Alam television, blasts affected two oil tankers in the Gulf of Oman on Thursday.

Initially it was unclear under what flags the vessels operate. Citing shipping and trade sources, Reuters said they’re the Marshal Islands-flagged Front Altair and the Panama-flagged Kokuka Courageous.

A statement by Kokuka’s Singapore-based BSM Ship Management company said 21 crew members abandoned ship following the incident damaging its hull on the starboard side, the vessel “not in any danger of sinking. Its cargo of methanol is intact.”

Carrying naphtha, the Front Altair is reported “on fire and adrift,” cause of what happened to the Kokuka not explained so far.

Chartered by Taiwan’s state oil refiner CBC Corporation, the company said it’s “suspected (that the vessel was) hit by a torpedo…”

According to the Tradewinds shipping broadsheet, a Norwegian-owned Front Altair was struck by a torpedo off the UAE coast, no further details mentioned.

Pakistani sources reported that distress calls were sent by the affected tankers, crews aboard evacuated and safe.

Press TV said “(t)wo oil tankers c(ame) under attack (by explosions) in the Sea of Oman.”

All of the above comes after John Bolton and Mike Pompeo falsely accused Iran of attacking vessels belonging to the UAE and Saudi Arabia in early May, as well as striking Saudi pumping stations.

Last month, the UAE called incidents affecting its vessels part of a “coordinated” operation likely carried out by a state actor, without directly blaming Iran.

What possible benefit could Iran hope to gain by involvement in the above incidents? Clearly nothing whatever.

Its ruling authorities want provocations avoided — what the US, NATO, Israel, and their imperial partners are responsible for time and again, not Iran or other sovereign independent countries seeking peace and stability, not conflict.

It’s unclear how much damage was caused to tankers affected by the Thursday incident — very possibly a US or Israeli false flag, heightening tensions more than already.

At the time, Lyndon Johnson got the war he wanted. Congressional passage of the Gulf of Tonkin Resolution empowered him to take all measures believed necessary to repel aggression (that didn’t occur) — without formally declaring war.

Incidents in May were minor, causing little damage, no reported casualties. If Iran was responsible for what happened with malign intent, significant damage would have been likely, perhaps sinking the affected vessels and striking a Green Zone target accurately instead of amounting to nothing more than a harmless bang.

A US Baghdad embassy statement at the time said there were no casualties or damage. Falsely blaming Iran for incidents it had nothing to do with escalates tensions, upping the stakes for possible war.

Washington’s longstanding objective is to return Iran to US client state status — so far under Trump waging war by other means alone.

A critic once slammed him, saying “(h)e never met a country he didn’t want to destroy.” Another observer said he’s much more than “a run-of-the-mill hawk…He’s never seen a foreign policy problem that couldn’t be solved by bombing.”

His longstanding hostility toward Iran is well known, earlier calling for bombing the country to prevent it from developing nuclear weapons it abhors, doesn’t have or seek, and wants eliminated everywhere.

Pompeo reportedly favors war on Iran by other means, wanting its economy crushed, falsely believing its authorities will cave to US demands.

Netanyahu and other Israeli hardliners dream of war on Iran to eliminate the Jewish state’s main regional rival.

It’s a divide, conquer and dominate strategy, wanting control over the region’s valued energy reserves, creating a so-called new Middle East, a region earlier carved up post-WW I by partitioning the Ottoman Empire.

The US global empire of bases is all about using them as platforms for endless wars and gaining control over world nations. That’s what the scourge of imperialism is all about.

Citing the Islamic Republic News Agency (IRNA), Press TV reported that “an Iranian rescue vessel had picked up the 23 crew members of one of the tankers and 21 of the other from the sea and had brought them to safety at Iran’s Jask, in the southern Hormozgan Province,” adding:

Details of what happened remain sketchy. This is a developing story. More on it when further information is known.

The Trump regime no doubt will blame Iran for what it surely had nothing to do with — likely increasing its “maximum pressure” on the country in the wake of the Gulf of Oman incident.

It ups the stakes for possible war in a part of the world already devastated by US aggression.

Is Iran next on its target list for greater greater war then? Do Trump regime hardliners intend making the region boil more than already?

Given their rage to transform Iran into a US vassal state, anything is possible, even war on a nation able to hit back hard against US and Israeli targets if attacked.

Award-winning author Stephen Lendman lives in Chicago. He can be reached at lendmanstephen@sbcglobal.net. He is a Research Associate of the Centre for Research on Globalization (CRG)

His new book as editor and contributor is titled “Flashpoint in Ukraine: US Drive for Hegemony Risks WW III.”

Visit his blog site at sjlendman.blogspot.com.

Featured image: Smoke billows from a tanker said to have been attacked off the coast of Oman at un undisclosed location. The crews of two oil tankers were evacuated off the coast of Iran after they were reportedly attacked in the Gulf of Oman.Image Credit: AFP

2 thoughts on “False Flag Incident in the Gulf of Oman? By Stephen Lendman”