The Grenfell Tower fire of June 14, 2017 is an event seared into the consciousness of working people across London and around the world. 72 men, women and children perished in their homes.

As part of its “regeneration” plans, the Royal Borough of Kensington and Chelsea Council and its tenant management organisation (KCTMO) encased Grenfell in cheap, flammable cladding causing a small kitchen fire to engulf the building in minutes.

“In years to come,” wrote the Socialist Equality Party, “it will be necessary to refer to the political life of Britain in terms of ‘before’ and ‘after’ Grenfell. This is because the tragedy has so cruelly exposed the underlying reality of social relations between the classes—and it did so in London, one of the richest cities in the world, and in London’s richest constituency.”

Millions of workers understood that the fire was not just a tragedy, but a crime. In The Condition of the Working Class in England, Frederick Engels explained, “When society places hundreds of proletarians in such a position that they inevitably meet a too early and an unnatural death” and “yet permits these conditions to remain, its deed is murder just as surely as the deed of the single individual.”

The social murder of 72 people was the outcome of a decades-long war against the working class. “There is no such thing as society” was Margaret Thatcher’s paean to free-market capitalism and a pledge that all restraints on wealth accumulation for the super-rich would be torn to shreds, including building and fire safety regulations and the privatisation of council housing. 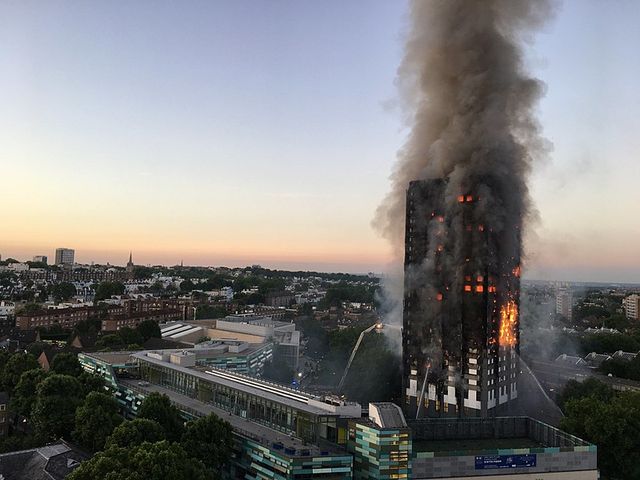 Tony Blair’s New Labour followed suit, declaring they were “intensely relaxed about people getting filthy rich” and overseeing London’s transformation into a playground for bankers and oligarchs. Huge swathes of housing, social care, transport and the National Health Service were privatised or put in hock via Public Private Partnerships. The terms “social cleansing,” “rough sleeping” and “the working poor” entered everyday speech.

By June 2017, it was possible to buy a £16.5 million mansion in Chelsea, complete with a gym and cinema, but not to find a fire engine with a ladder that extended more than 30 metres—a situation London firefighters described as “criminal.” In a borough home to royalty, residents at Lancaster West Housing Estate were killed in a tower block without fire sprinklers. Grenfell had one stairwell, no fire alarm and the building’s emergency exit lights were broken. Those who called 999 were told to “stay put” as combustible cladding produced thick cyanide-laden smoke that filled halls and stairwells. London fire crews fought heroically with a service decimated by cuts.

The class arrogance of the authorities fuelled outrage, with the offices of the Kensington and Chelsea Council stormed by protesters two days after the fire.

The Grenfell fire exposed the failure of capitalism. Its aftermath showed the immense social power of the working class. It was working people who organised relief efforts, co-ordinating donations of food, clothing, toiletries, medicine, blankets and emergency accommodation. It was they who compiled the first missing persons lists.

The basic division of society into classes asserted itself as working people acted independently, brushing aside superficial differences of race, ethnicity, religion and gender.

Placed on the back foot, the state worked to regain control. Its chosen political mechanism was the government inquiry, headed by Sir Martin Moore-Bick. But this whitewash was only made possible by the backing of Labour leader Jeremy Corbyn, local Labour MP Emma Dent-Coad and Fire Brigades Union chief Matt Wrack. It was they who corralled residents’ anger behind a fraud. Moore-Bick ruled out investigating any causes of a “social, economic and political nature” and the inquiry had no power to lay criminal charges. Its sole function was to subordinate all demands for justice to a process that would only ever protect the guilty.

Two years on it is business as usual for the ruling class. At least 17 Grenfell families are still in temporary accommodation. Just 13 people have been interviewed “under caution,” with London Metropolitan Police admitting that despite identifying potential suspects for offences of corporate and gross negligence manslaughter, “there is no guarantee that we can give that there will be criminal charges.”

And while the guilty walk free, in a vicious act of class justice, respected Grenfell campaigner Reis Morris—who lost family and friends in the fire—will spend today’s anniversary behind bars, after confronting a Grenfell site manager for ignoring his complaints.

As Mayor of London, Boris Johnson told protesting firefighters to “get stuffed” after they warned his savage cuts would kill. This political pyromaniac is now the favourite to win the Tory leadership contest and replace May as prime minister.

Last Sunday’s fire that ripped through 20 flats in Barking, east London, proves that nothing has changed. Within 12 minutes, fire spread across all six storeys via wooden balconies and cladding approved by a broken building and fire safety regime. Once again residents’ safety concerns were ignored. Only the fact that the fire took place in the afternoon prevented a major loss of life.

All over the world, capitalism is becoming a dirty word as workers confront a parasitic ruling class obsessed with the accumulation of personal wealth, even if this means ruining the lives of millions. A study this month found 130,000 preventable deaths were caused by austerity in the UK since 2012. In the two years since Grenfell, horrific fires have claimed hundreds of lives from Kemerovo in Russia where 64 people, including 41 children, were killed, to Dhaka in Bangladesh where a blaze claimed more than 80 lives.

Edward Daffarn, who narrowly escaped on the night of the fire, told the Guardian this week that Grenfell campaigners have reached a crossroad. Grenfell United had been prepared to work with the government, attending dozens of meetings with ministers and civil servants, but this strategy had failed: “The one thing they fear is social unrest—and rightly so. Go to any meeting in Kensington and that anger is still there. It hasn’t dissipated. We wasted 22 months trying to do it this way, and now we have to come up with another solution. We have learned a lot. They failed us.”

A new political strategy is needed—the fight for socialism. Justice for Grenfell cannot be achieved outside of a frontal assault by the working class on the wealth and power of the financial oligarchy and its political defenders.

The guilty, representatives of Arconic and Celotex who manufactured flammable cladding and Harley Facades and Rydon Construction who installed it, council officials who approved its use and the politicians directly involved, including Johnson, must be arrested.

The Socialist Equality Party urges Grenfell families and their legal teams to withdraw all co-operation from the government’s rotten inquiry. Those such as Corbyn and Dent-Coad who continue to support it are facilitating a state cover-up.

Billions of dollars must be made available to create safe and secure homes for all. This means confiscating the wealth of the financial aristocracy, nationalising the banks and corporations to place them under public ownership and democratic control, and reorganising the UK and world economy not for profit, but to meet the needs of humanity.