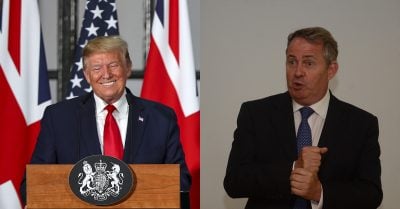 Global Justice Now has launched a legal challenge at the Information Rights Tribunal over the Department for International Trade’s failure to release details of numerous trade meetings it has held with the United States and other countries since the EU referendum in 2016.

It follows an outcry during last week’s state visit of US President Donald Trump over whether controversial areas like the NHS and chlorinated chicken will be on the table in negotiations over a post-Brexit trade deal between the US and UK.

At that time, the Department of Trade was known to have set up at least 14 working groups covering 21 countries including the United States, Saudi Arabia, Turkey, China and India. While talks over new deals cannot formally be called negotiations until after the UK’s departure from the EU, regular quarterly meetings are nonetheless already taking place with the United States, for example.

A ruling by the Information Commissioner in March 2019 resulted in the release of hundreds of pages of documents relating to the working groups, but these were either entirely or heavily redacted on the basis of a variety of exemptions, including the “extremely sensitive” nature of international trade agreements.

However, minutes of UK-US Trade & Investment Working Group meetings in July 2017 and November 2017 did reveal that ‘Agricultural market access’ and ‘Services’ – potentially covering the NHS – as well as ‘Labour and environmental standards’, ‘Intellectual property’, ‘Financial services’ and ‘Data, digital and e-commerce issues’ have all been on the agenda in the talks.

Global Justice Now is working with barrister Dr Sam Fowles and law firm Leigh Day to challenge the ruling at the Information Rights Tribunal on ten grounds, including that the requirement for confidentiality has been exaggerated, and that the balance of public interest lies in favour of disclosure.

“Trade deals are supposedly the number one benefit of Brexit, yet Liam Fox is fighting tooth and nail to keep his plans for them out of the public domain. After more than a year of appeals, Fox’s department has only ‘released’ hundreds of pages of blacked out documents relating to these secretive trade talks – making a mockery of democracy and taking back control.

“Donald Trump may have let the cat out of the bag over a US-UK trade deal last week, but the public has a right to know whether this government has already put the NHS or chlorinated chicken on the table behind closed doors. It is outrageous that matters as important as the future of our NHS and our food standards should be being discussed in secret, especially with parliament currently having no powers to vote to stop a trade deal after Brexit. We are bringing this appeal to ask the simple question: what does Liam Fox have to hide?”

“The Secretary of State has contended that it is not in the public interest to disclose details of his trade negotiations. This raises an important constitutional issue. International Trade Agreements can have domestic impacts that are equivalent to legislation yet are not subjected to anything approaching an equivalent level of scrutiny. We will be asking the Tribunal to find, as the House of Lords Constitution Committee found, that there should be a “general principle in favour of transparency” in relation to materials relating to international trade agreements.”

“The UK government argues that details about Brexit trade talks must be kept confidential. To do otherwise, they say, would prejudice negotiations. But this blanket approach to secrecy is unlawful. Trade deals bind successive governments. Many governments, the US and Canada for example, allow their citizens to know about their negotiations.

“UK citizens were told by the Leave campaigns that the UK government would be able to broker better international trade agreements than the EU. The public has a right to know whether this is in fact true; is the government managing to negotiate better terms in our name?

1. Global Justice Now commissioned Brendan Montague of the Request Initiative to submit the Freedom of Information request in 2017. The following information was requested on trade working groups in respect of 17 specified states and in relation to any state for which a working group existed but was not listed in the request:

2. The appeal has been filed with the First-tier Tribunal (General Regulatory Chamber), case number EA/2019/0154. A hearing is expected in the autumn.

Featured image is from GJN