As ever, the Guardian wins the prize for the most tendentious reporting of Roger Stone’s conviction. This is not quite on the scale of its massive front page lie that Paul Manafort visited Julian Assange in the Ecuadorean Embassy. But it is a lie with precisely the same intent, to deceive the public into believing there were links between Wikileaks and the Trump campaign. There were no such links. 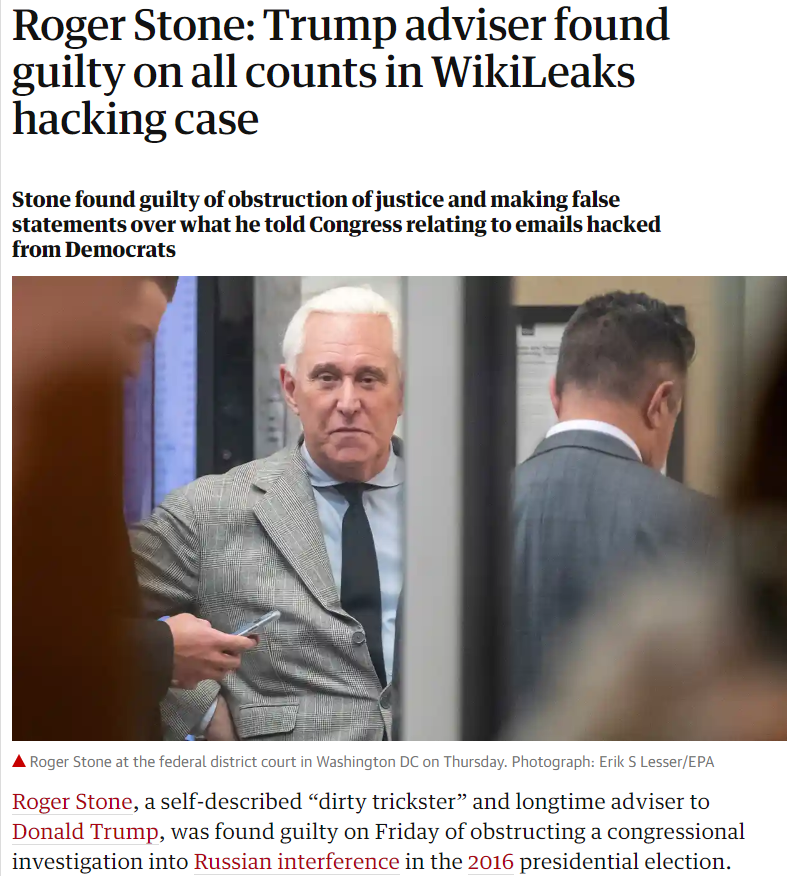 The headline “Roger Stone: Trump Adviser Found Guilty On All Charges in Trump Hacking Case” is deliberately designed to make you believe a court has found Stone was involved in “Wikileaks hacking”. In fact this is the precise opposite of the truth. Stone was found guilty of lying to the Senate Intelligence Committee by claiming to have links to Wikileaks when in fact he had none. And of threatening Randy Credico to make Credico say there were such links, when there were not.

It is also worth noting the trial was nothing to do with “hacking” and no hacking was alleged or proven. Wikileaks does not do hacking, it does “leaks”. The clue is in the name. The DNC emails were not hacked. The Guardian is fitting this utterly extraneous element into its headline to continue the ludicrous myth that the Clinton campaign was “Hacked” by “the Russians”.

Astonishingly, in the case of Stone, he has been convicted of saying that the Mueller nonsense is true, and he was a Trump/Wikileaks go-between, when he was not. Yet despite the disastrous collapse of the Mueller Report, and despite the absolutely devastating judicial ruling that there was no evidence worthy even of consideration in court that Russiagate had ever happened, the Guardian and the neo-con media in the USA (inc. CNN, Washington Post, New York Times) continue to serve up an endless diet of lies to the public.

Randy Credico was the chief witness for the prosecution against Roger Stone. That’s for the prosecution, not the defence. This is the state’s key evidence against Stone. And Credico is absolutely plain that Stone had no link to Wikileaks. The transcript of my exclusive interview with Randy has now been prepared (thanks to Sam and Jon) and follows here.

I spoke to Randy yesterday to clarify one point. The first conversation Randy ever had with Julian Assange was on 25 August 2016 and it was on-air on Randy’s radio show. There was no private talk off-air around the show. That was Randy’s only contact of any kind with Julian Assange before the 2016 election. His next contact with him, also an on-air interview, was not until Spring 2017, well after the election. He could not have been in any sense a channel to Wikileaks.

Here is the unedited interview from 10 November:

RC: Hello.
CM: Hello there, Randy. Hello, can you hear me OK?
RC: Yes, perfectly.
CM: Yeah. I’m good, I’m very good indeed. OK, let’s do it like this, shall we, it seems …
RC: Now listen, before you start, you can ask me anything you want, and this is the only interview I’m going to do. I’ll be in town with—like, all day long—with people asking me to talk about this and I just want to get it out of the way and move on. All right?
CM: No, I quite understand. And that’s very sensible. Now, let’s start then … let’s start … before we get into the substance, let’s start then with some of the atmospherics. How did it feel to you, you know, to be you … to be Randy walking into that courtroom?
RC: Well, you know, when I, when I … first of all, for the last eight months I knew this was eventually going to happen. So I’ve been on needles and pins, a lot of anxiety that … Wait a second … Hold on, hold on … can you start and do that again?
[aside] Bye, everybody. … I’m doing an interview with somebody here.
Hi, Craig. Hi, Craig.
CM: Yep. Yep. I’m here.
RC: Hello. All right. Start going. Start … start again.