“This is not a new mission.”

Syrian soldiers are seen deploying in an oil-rich area in the countryside of Qamishli, northeastern Hasakah province, Syria, on Nov. 5, 2019. The Syrian army on Tuesday deployed in new areas rich in oil fields in the countryside of Hasakah province in northeastern Syria, the latest progress in the overall deployment of the Syrian army in Kurdish-held areas near the border with Turkey. (Photo: Xinhua/ via Getty Images)

Pentagon officials asserted Thursday U.S. military authority over Syrian oil fields because U.S. forces are acting under the goal of “protecting Americans from terrorist activity” and would be within their rights to shoot a representative of the Syrian government who attempted to retake control over that country’s national resource.

END_OF_DOCUMENT_TOKEN_TO_BE_REPLACED

Peter Oborne deserves credit. He is the former chief political commentator of The Daily Telegraph, author of The Rise of Political Lying and The Triumph of the Political Class. He used to write a political column for the Daily Mail until two weeks ago when he turned on them and the Boris Johnson government to reveal  them as the political chancers that they are.

END_OF_DOCUMENT_TOKEN_TO_BE_REPLACED

To Residents of the UK,

BBC Radio 4’s Today programme has asked its listeners to email in topics that they want the BBC to cover during this general election campaign. I am sending this email to 14,553 UK residents who are signatories of the 5G Space Appeal. If all of you email the BBC asking them to cover the health and environmental effects of 5G, they will cover it.

The BBC has requested that emails should be be sent to today@bbc.co.uk, with the subject line “Off the Grid.”

Hundreds Stand Tall in Solidarity with the People of Latin America at Havana Conference
https://dissidentvoice.org/2019/11/hundreds-stand-tall-in-solidarity-with-the-people-of-latin-america-at-havana-conference/

END_OF_DOCUMENT_TOKEN_TO_BE_REPLACED

By Moon Of Alabama

Protests in Iraq and Lebanon are used by the U.S. for coup attempts financed by Saudi money.   –Continue

END_OF_DOCUMENT_TOKEN_TO_BE_REPLACED 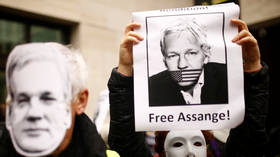 The father of WikiLeaks co-founder Julian Assange said his son is on course for a bitter end in prison for shedding light on American war crimes, as he faces looming extradition to the US.

John Shipton said on Friday that he visited Assange in prison in the UK this week and was horrified by how poorly his son is being treated behind bars.
END_OF_DOCUMENT_TOKEN_TO_BE_REPLACED

Around 7am on the fourth day of Extinction Rebellion’s (XR) “Spring Rebellion” in Melbourne in early October the clouds to the east cleared enough for the first bright rays of sun to penetrate through to a city centre still shrouded in a cold, misty rain. A dazzling rainbow appeared above the skyline – arching over the grey and blue forest of skyscrapers as members of XR huddled in a laneway below for a briefing on that morning’s action.