Many of the figures behind this gigantic web of lies and deceit ought to answer charges up to and including treason.   – Continue

END_OF_DOCUMENT_TOKEN_TO_BE_REPLACED

At the end of last year some enterprising ‘anonymous’ person released papers of the British Integrity Initiative. As we reported at that time:
END_OF_DOCUMENT_TOKEN_TO_BE_REPLACED

The NGO behind the Integrity Initiative – a project that claimed to fight “disinformation” but in reality appeared to be more of a covert British influence op – has been blasted by a new report for providing no “public benefit.”

END_OF_DOCUMENT_TOKEN_TO_BE_REPLACED

Once upon a time, there was a very bright little boy in Australia who grew up as stranger to conventional society. His mother went from husband to husband, from theater to cult, always on the eccentric margins, while the boy’s natural father was left behind. As an adolescent he found his own world in cyberspace, which offered a field for his insatiable curiosity. As he learned about that great world out there and its secrets, he developed his very own rigorous ethic: his vocation was to search for true facts and share them with the public. Living outside the usual social codes, his moral compass was uninhibited by the usual niceties. Truth was truth, deception was wrong, lies on the part of the powerful should be exposed.

END_OF_DOCUMENT_TOKEN_TO_BE_REPLACED

This film explores the truly insane & disturbing world of ‘nature commodification’ in all its warped dystopian horror.

END_OF_DOCUMENT_TOKEN_TO_BE_REPLACED

Welcome to issue 3 of Rebel Renter, a newsletter chock full of updates about all of the organising we’re doing together in the London Renters Union.
END_OF_DOCUMENT_TOKEN_TO_BE_REPLACED

END_OF_DOCUMENT_TOKEN_TO_BE_REPLACED

By The People’s Mobe | Resist!

For decades the U.S. government and its European allies have been illegally using unilateral economic sanctions (“Unilateral Coercive Measures”) as a weapon of war and mass destruction to topple governments that do not submit to the U.S. and European states’ domination of their country. The main objective of these unilateral sanctions is to destroy those small countries’ economies and bring their people to their knees through mass starvation so they will be left with no choice but to revolt against their own government. END_OF_DOCUMENT_TOKEN_TO_BE_REPLACED 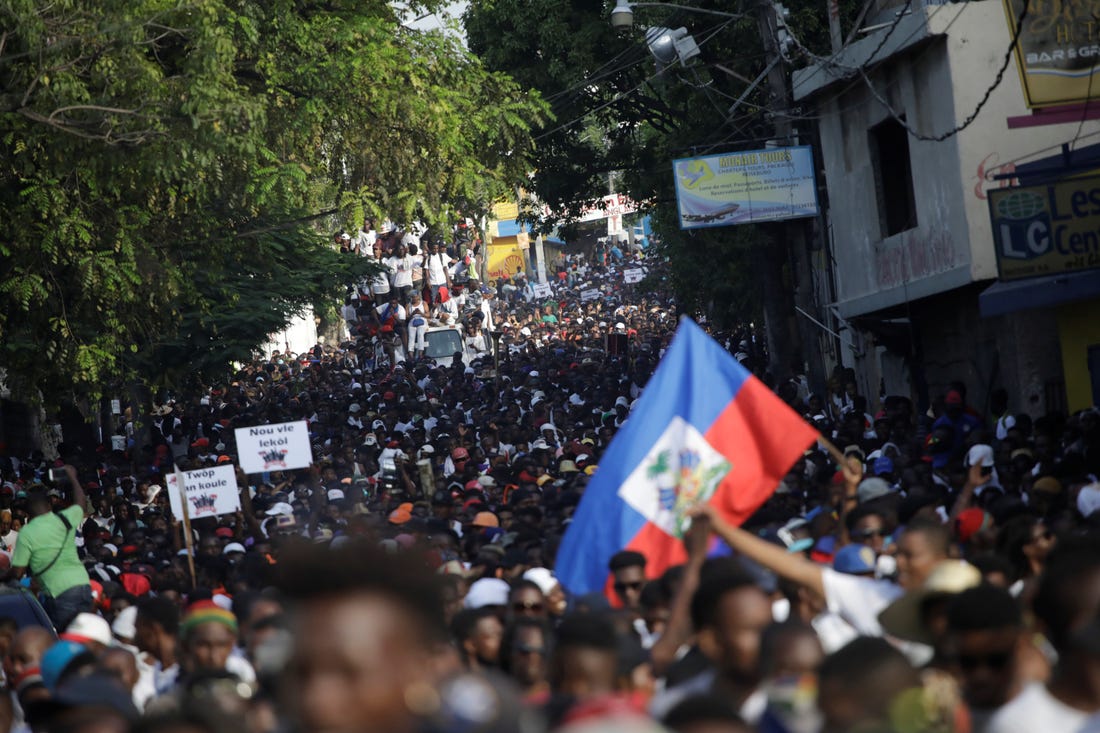 In the seventh week of protests, and 100 years after the assassination of Charlemagne Peralta, the hero of resistance to the American invasion of 1915-1934, Haitian majorities are mobilizing throughout the country today. In the capital Port-au-Prince they will march, significantly, to the North American embassy, denouncing the continuity of the American interference in the domestic affairs of the Caribbean nation.

END_OF_DOCUMENT_TOKEN_TO_BE_REPLACED

“The smart way to keep people passive and obedient is to strictly limit the spectrum of acceptable opinion, but allow very lively debate within that spectrum — even encourage the more critical and dissident views. That gives people the sense that there’s free thinking going on, while all the time the presuppositions of the system are being reinforced by the limits put on the range of the debate.”

The plutocrat-owned narrative managers of the political/media class work constantly to shrink the Overton window, the spectrum of debate that is considered socially acceptable. They do this by framing more and more debates in terms of how the oligarchic empire should be sustained and supported, steering them away from debates about whether that empire should be permitted to exist at all.

END_OF_DOCUMENT_TOKEN_TO_BE_REPLACED

TruePublica Editor: There is no possibility of predicting what will be the outcome of election 2019. The pollsters will do everything they can to attempt to regain the confidence of … well, anyone after disastrous prediction results and their criminality at the EU referendum. At the 2015 election, 2016 referendum and 2017 snap election, they were either way off the mark or lying and their reputation in political circles lies in tatters. Forget what the pollsters say until it’s we know the actual results. An article at the London School of Economics explains that polling on vote expectations rather than vote intentions (a big mistake by pollsters since 2015) is the answer. We’ll see.