After a uneven first response China did its very best to limit the spread of the nCov-19 virus and the Covid-19 disease the virus causes. The extreme quarantine, which began in mid January, has come at a great economic cost but bought the rest of the world time to prepare for the inevitable surfacing of the virus in other countries.

Unfortunately many governments did not use the month given to them and botched their responses. The number of newly confirmed cases per day outside of China is now bigger than the new daily number inside of China. South Korea alone reported 334 new confirmed cases today while the much larger China only reported 433. 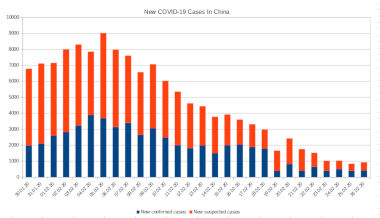 China has shown that it is possible to successfully fight and stop the epidemic. Unfortunately other countries are not ready to follow its example. This is now making it likely that the epidemic in China will become a pandemic and will spread mostly uninhibited all over the globe.

South Korea, Japan, Iran, Italy and the U.S. are now the countries which will see the next great impacts. Other countries will follow in a third wave as Brazil, Pakistan, North Macedonia, Greece, Georgia, Algeria, Norway and Romania all saw their first cases in the last 24 hours.

The wide spread in South Korea came through a religious cult which demands mandatory participation in overcrowded services. It was patient 31 and her contact with 1160 other persons that led to the wider spread:

It’s not clear where Patient 31 became infected with the virus, but in the days before her diagnosis, she travelled to crowded spots in Daegu, as well as in the capital Seoul. On February 6 she was in a minor traffic accident in Daegu, and checked herself into an Oriental medicine hospital. While at that hospital, she attended services at the Daegu branch of the Shincheonji Church of Jesus, on February 9 and again on February 16.

In between those visits, on February 15, doctors at the hospital said they first suggested she be tested for the coronavirus, as she had a high fever. Instead, the woman went to a buffet lunch with a friend at a hotel. In an interview with local newspaper JoongAng Ilbo, the woman denied that doctors had advised her to be tested. As her symptoms worsened, however, doctors say they once again advised her to be tested. On February 17, she finally went to another hospital for the test. The next day, health authorities announced she was the country’s 31st confirmed case. In only a matter of days, those numbers had soared as hundreds of people at the Shincheonji Church and surrounding areas tested positive.

The quarantine of a whole cruise ship in Japan and the incompetent bureaucratic response to it made a further spread in that country inevitable:

On Saturday, the health minister admitted that 23 passengers had been released from the ship without taking a valid recent test and had traveled by public transit after disembarking this past week.

Now that the quarantine has ended and most of the passengers have left, the concern is that they could start spreading the virus on shore.

Japan now has 200 cases and its government has decided to close all schools throughout March.

In Iran the epidemic came from China with people who went to Qom for religious training. The spiritual center of Iran has many religious schools and universities and many pilgrim visit the shrines in the city. They contributed to the further spread of the virus. Iran now has a total of 254 confirmed cases including two lawmakers, a vice president and a deputy minister.

The Iranian government first blamed foreign broadcasts in Farsi language for creating a panic. That was not without reason when one consider the racist reporting like in the New York Times: ‘Recipe for a Massive Viral Outbreak’: Iran Emerges as a Worldwide Threat. The Gulfnews even blamed Iran for all Covid-19 cases in the Middle East while the first cases in the Emirates came from contacts with Chinese tourists.

Italy has some 400 cases of which 190 are confirmed. It put 55,000 residents in the northern regions of Lombardy and Veneto under lockdown.

The above countries have now grasped the severity of the issue. The Trump administration seems to be far behind them.

The U.S. is likely to already have a significant number of cases but a lack of testing capacity has made any realistic estimate impossible.

Chinese scientists had published the genome sequence of the virus on January 12 and, based on it, developed test kits within a few days. The U.S. Center of Disease Control and Prevention also developed a test kit but had problems with its first version and its wider distribution. More than a month later it is still not ready for the foreseeable need:

The Centers for Disease Control and Prevention isn’t yet ready to detect whether the coronavirus is spreading across the country.

Just 12 of more than 100 public health labs in the U.S. are currently able to diagnose the coronavirus because of problems with a test developed by the CDC, potentially slowing the response if the virus starts taking hold here. The faulty test has also delayed a plan to widely screen people with symptoms of respiratory illness who have tested negative for influenza to detect whether the coronavirus may be stealthily spreading.
…
Only six states — California, Nebraska, Illinois, Nevada, Tennessee, and Idaho — are now testing for the virus, the Association of Public Health Laboratories told POLITICO.
…
Under current rules, each positive test must be confirmed by a second round of testing at the CDC. [Director Robert Redfield] told lawmakers that the agency can now screen 350-500 samples per day.
…
“I understand very much the FDA is focused on quality control, but there’s also a need to have a system that can respond to their needs,” [Marc Lipsitch, an epidemiology professor at the Harvard T.H. Chan School of Public Health,] said. “China tested 320,000 people in Guangdong over a three-week period. This is the scale we need to be thinking on.”

A case in Los Angeles shows where this leads to:

It took several days to test a coronavirus patient in Northern California who might be the first to have contracted the disease through community exposure in the United States.

The individual is a resident of Solano County and is receiving medical care in Sacramento County, according to the state Department of Public Health.

UC Davis officials said the patient arrived at UC Davis Medical Center from another hospital Feb. 19. But the patient was not tested until Feb. 23.

The test results were only known three days later.

Under the U.S. medical system testing will be expensive for the patients. Insurances may not pay for it. Many people will be unable or unwilling to spend money on it. Care for serious cases will also be limited by high prices. This guarantees that the virus will spread further. China was smart enough to guarantee 100% state coverage for testing and all necessary care. The U.S. should follow that principle but is  unlikely to do so.

Trump announced that Vice-President Pence, a man who does not believe in science, will lead the response. The libertarian and neo-liberal approach to the problem will further the epidemic’s growth. Only after it becomes really severe will the necessary measures be taken.

To assess the wider global impact of the pandemic this table is most helpful: 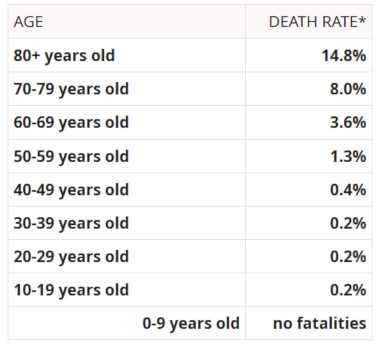 In an unrestricted pandemic the virus will infect between 40 to 70 percent of the population. The virus is more deadly than a normal flu but mostly for elderly people with severe preconditions. Children and grown ups in their most productive years can carry the virus without showing symptoms and will only rarely become critical cases. This guarantees that our societies will continue to function. The pandemic will have severe, but not catastrophic, economic consequences as quarantines and fear will limit production and trade on all levels.

Trump’s reelection chances are sinking as Covid-19 cases rise. The incompetence of his administration will come under new light. The stock markets will continue to tumble and erase the economic gains Trump had claimed. Bernie Sanders’ chances to win, if he survives the pandemic, will increase as his prime campaign promise -Medicare for all- will become even more acceptable when the problems with the current U.S. healthcare system come under new public scrutiny.

There are only few personal measures one can take to protect oneself from exposure. One should avoid personal contacts where possible. Wearing a mask, unless it is a special N-95 respirator which also makes it difficult [to] breathe, does not prevent one from catching the virus. But infected persons should use masks to protect those they may come in contact with from droplet infections. Stocking up on basic foodstuff and other needs might help to avoid potential shortages.