Two years ago, on March 4 2018, Sergei Skripal a British-Russian double agent and his daughter Julia were poisoned in the streets of Salisbury, England. The British government accused Russia of an attempt to kill the Skripals with a nerve agent.

We followed (see below) the strange story as it developed and found that the official UK government version of it made absolutely no sense. Many of the assertions made by the British government did not withstand any scrutiny. The story was also inconsistent with a later incident in the nearby Amesbury during which Dawn Strugess allegedly died of contact with a similar substance as the one that supposedly poisoned the Skripals.

Since the incident happened neither Sergei Skripal nor his daughter have been allowed to talk to the public. They have simply vanished. The British government is preventing them from reaching out to their family, the media and anyone else. Where are they?

John Helmer, who writes at Dances with Bears, has send me his book about the case. Its title is the answer to my question: Skripal in Prison. 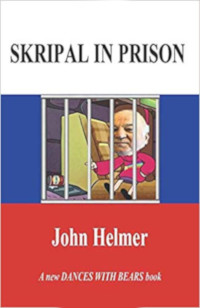 It is most likely that Sergei Skripal was trying to go back to Russia. Skripal may well have been a source for the debunked Steele dossier and was probably willing to talk about it. But whatever his plans were the British government found it necessary to prevent him from executing them. It created an elaborate false story and fed it to the global media. The mainstream media swallowed it up without even the slightest sign of critical thinking.

That is the reason why Rob Slane of The Blogmire, John Helmer and I have all extensively written about the case. We know that the British government and the mainstream media are lying about it and we have all developed our own theories of what really happened and about the whys and hows.

John Helmer’s book is a collection of his blog posts on the case with a new indroduction and additional chapters. This already makes it a valuable reference for anyone who wants to recap the story as it developed.

Helmer also adds two important and new factual points. He had requested information from various British authorities about the pending legal procedures around the cases. He finds that there is no evidence of any official legal investigation or court case that could bring light into the issue. This is astonishing as the British procedures seem to demand a further inquest.

There is also no evidence for the existence of the announced arrest warrant against the two Russian citizens which the British government has accused of being involved in the case.

Helmer’s book has 327 pages including a quite useful index. It has a number of pictures and reproductions of official statements on the issue and includes many useful links to original sources. The book can be purchased as paperback or in electronic form.

—
Previous Moon of Alabama posts on the Skripal case:

One thought on “Where Are The Skripals?”