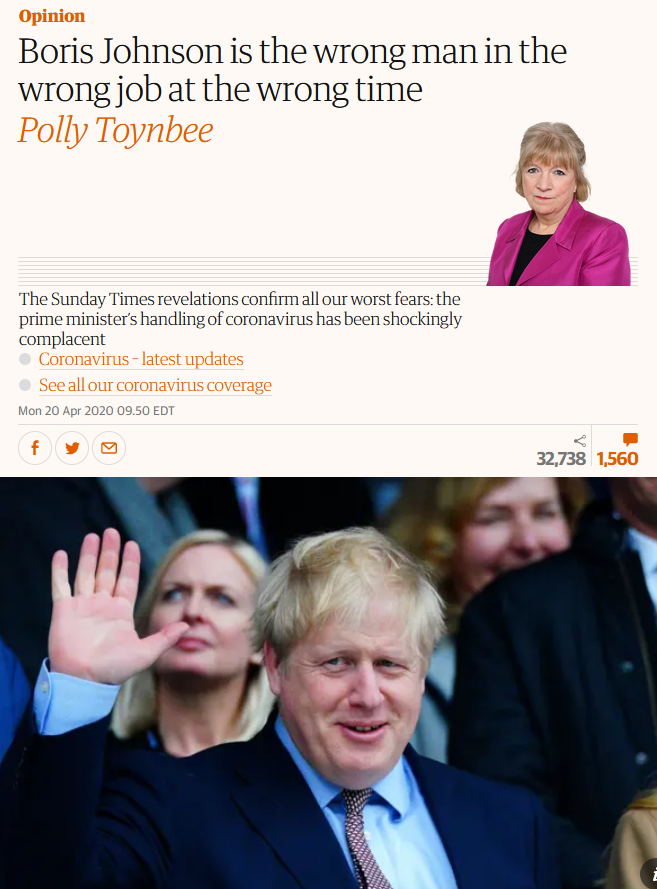 As the UK quickly becomes a world leader in death and infections from the Covid-19 pandemic, corporate media are transforming British Prime Minister Boris Johnson into an international Coronavirus bugaboo.

His handling of the pandemic certainly qualifies him for this status. Not only was he the first world leader to tout, then abandon, the discredited, neo-Malthusian “herd immunity” approach, based on the idea that countries should avoid lockdowns and let the virus burn its course, which has now become a rallying cry to the international far right, his own lax attitude towards social distancing nearly killed him two weeks ago as he ended up on oxygen in an NHS intensive care unit.

As the number of official deaths in Britain now exceeds those who died during the Blitz in World War II, British media have no alternative but to throw Johnson under the bus. “Trust is essential in these times. But Boris Johnson is not a man to be trusted,” writes Will Hutton on the pages of the Guardian’s op-ed section (4/5/20). “He’s the wrong man at the wrong time,” says Polly Toynbee (Guardian, 4/20/20).

On the other side of the pond, this reaction is reflected in US media coverage as well. “Boris Johnson’s Shocking Coronavirus Decline,” read a New Yorker headline (4/7/20). The Washington Post (4/20/20) accused Boris Johnson of “bungling the coronavirus response and unleashing disaster.” On the New York Times op-ed page (3/26/20), Jeni Russel wrote:

The man came to power playing Falstaff, a double-dealing, comically entertaining, shameless rogue; now he is suddenly onstage as Henry V, the wartime king whose solemn judgment, intense focus, charisma and conviction must lead his nation in a time of crisis. Mr. Johnson does not know how to play that part, and it shows. This is not a rehearsal. His careless, inexcusable reluctance to track and halt the virus earlier will have cost lives. 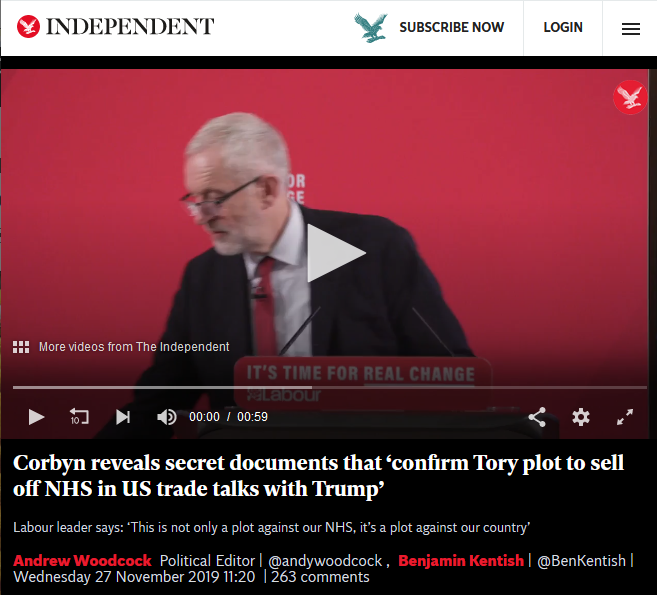 Did the documents in fact confirm a Tory plot to sell off the NHS? The British press couldn’t say (Independent, 11/27/19).

It is clear now that the British population’s 2019 electoral choice of Johnson over Labour’s Jeremy Corbyn,  a candidate who was more qualified and more committed to public health, social and environmental justice, will end up costing the nation tens of thousands of lives. The people can’t say they weren’t warned, either—as declassified government documents revealed exactly how Johnson and the Tories were planning to gut and privatize the NHS last year, even if the Guardian (11/27/19) and the Independent (11/27/19) used scare quotes and couched the story in vague language.

As the pandemic takes hold around the world and the death toll mounts, journalists wring their hands in despair, as if to say, “How did this happen? How could the people elect someone they knew would butcher public health and be poorly equipped to deal with any kind of emergency?”

The way it’s being treated in the press, it’s almost as if it happened in a vacuum, by accident. Far be it from the biggest establishment media institutions to show any personal accountability in these processes—a virtue that they constantly demand from public figures.

Could, for example, the Guardian’s publishing 1,215 articles and op-ed pieces accusing the Labour Party of antisemitism, between 2016 and the December 2019 elections, have anything to do with the fact that tens of thousands of people are now dying due to the Tory’s botched mishandling of the coronavirus pandemic? Did Labour’s actions really warrant this treatment? After all, it is the British political party which is behind 100% of all anti-racism legislation in the modern history of the UK. An independent 2016 study revealed that the Labour Party was not overrun by antisemitism, and polls show that antisemitism within the party significantly declined during Corbyn’s leadership.

But like Bernie Sanders, who, despite a lifetime of feminist activism, was accused of sexism during the Democratic primaries by supporters of serial sexual-harasser Joe Biden, Corbyn has a long and consistent history of anti-racist activism that does not merit the treatment he received from historically progressive newspapers like the Guardian.

While it is true that the US media ruthlessly smeared Bernie Sanders, 1,215 articles represents a new low in character assassination that is worthy of a doctoral dissertation, and beyond the scope of this article to deal with in any systematic fashion, but it’s worth pointing out a few highlights.

One might think that, two weeks before an election, a newspaper with a large, international progressive readership would be working hard to support, or at least give non-biased coverage to, the Labour Party, not running a “guide” (11/26/19) to its alleged antisemitism, systematizing its hundreds of articles on the subject, complete with unverified accusations of “130 outstanding cases in the party.” 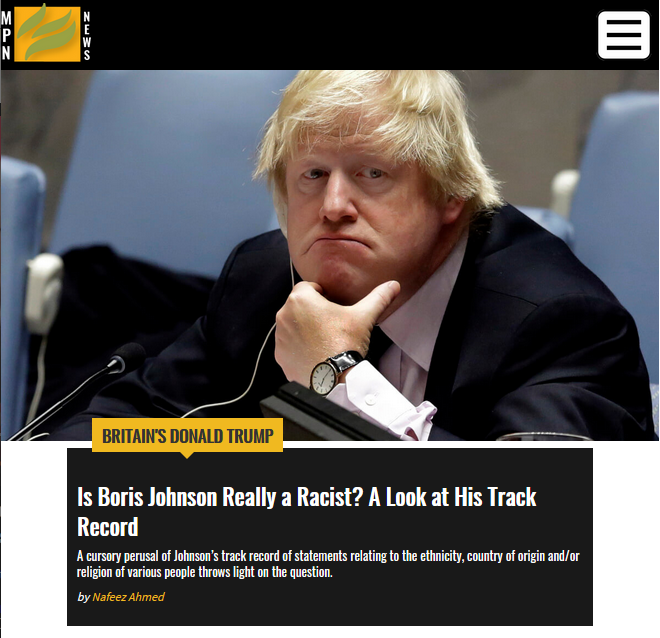 Despite Boris Johnson’s long history of vile slurs (Mint Press News, 8/15/18), it was the question of whether Jeremy Corbyn was sufficiently opposed to bigotry that dominated press coverage of the 2019 British elections.

While Corbyn has never used racist caricatures to describe any minority group, Johnson has a long history of doing so, as in a 2002 Telegraph column (1/10/02) that described African victims of British imperialism as having “watermelon smiles.” Wouldn’t his words and deeds deserve, at the least, equal coverage?

The Guardian spent months rallying against Corbyn for refusing to apologize for comments by members of his party that were critical of the right-wing Israeli government. Couldn’t it have spent equal time demanding that Johnson apologize for racist things that he actually said publicly?

With tens of thousands of British people now dead from Covid-19, the Guardian itself could apologize for refusing to publish complaints about its own biased coverage on the antisemitism issue, such as a letter from 200 Jewish women that read:

We, all Jewish women, are baffled, hurt and infuriated by your unquestioning coverage of Margaret Hodge’s campaign against Jeremy Corbyn (“Just Close Them Down: Margaret Hodge on Antisemitism in Labour Branches,” March 9). Hodge extends her allegations that Corbyn is an “antisemite and racist,” under whom antisemitism “has been given permission to come into the mainstream and, like a cancer, is infecting and growing through the party.”

Hodge provides no evidence of such horrific wrongdoing by Corbyn, nor by “mainstream” Labour members. Her own submissions to the Labour Party certainly don’t do the job: General Secretary Jennie Formby reported that Hodge’s 200 complaints concerned 111 individuals, of whom only 20 were actually party members.

This hate campaign against Corbyn bled into the US media, perhaps to strengthen the argument that there was something essentially wrong with any politician who challenges capitalism, like the weaponized accusations of corruption selectively used against Latin American leftists like Lula da Silva and Christina Kirchner, or the “Bernie Bro” trope that was developed by the DNC to use against Bernie Sanders. In US think tanks and on the op-ed pages of top US newspapers, allegations of Jeremy Corbyn’s antisemitism reigned supreme, often based on claims made in those 1,215 articles published in the Guardian.

The Brookings Institution (3/7/19) complained of the “indecency of Jeremy Corbyn.” The Atlantic (12/10/19) warned that British Jews were worried about Jeremy Corbyn and the Labour Party, without giving space to the key Jewish public figures and academics who endorsed the Corbyn campaign. 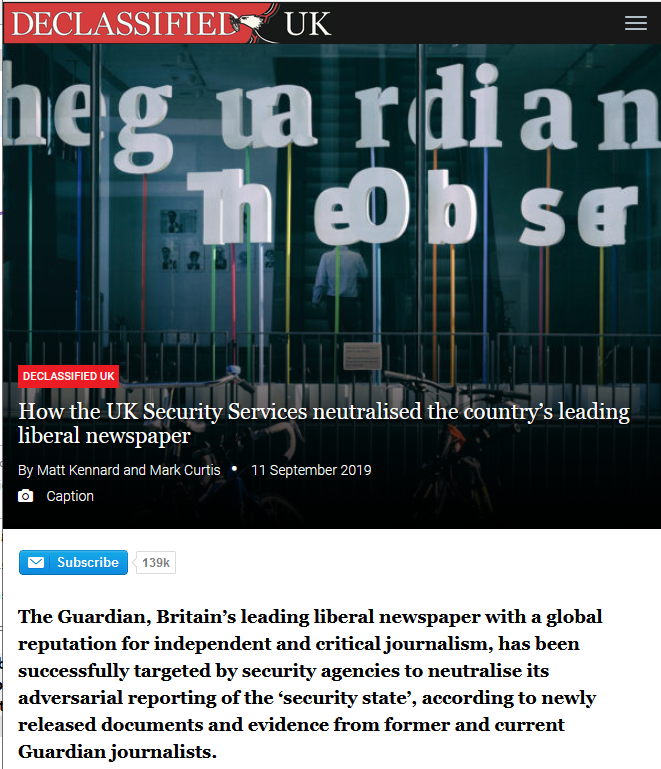 In September 2019, two months before the British elections, investigative journalists Matt Kenard and Mark Curtis published a long article in the Daily Maverick (9/11/19)  called “How the UK Security Services Neutralized the Country’s Leading Liberal Newspaper.” It analyzed a series of declassified government documents that showed that, after the fallout from the Edward Snowden leaks, representatives from the British intelligence agencies MI-5 and MI-6 started holding monthly meetings with the Guardian editorial board from 2014 onwards. One of their goals, the article states, was to neutralize the Corbyn campaign. This story was ignored by the Guardian and the US media outlets that were preoccupied with election-season smears against the Labour Party and the Corbyn campaign.

On April 12, after Covid-19 had killed thousands of people in England due to Boris Johnson’s greed and selfishness, in a development remarkably reminiscent of Donna Brazile’s 2017 revelation that neoliberal Democratic Party insiders has worked to destroy the 2016 Bernie Sanders campaign, an 851-page internal report from the Labour Party revealed that neoliberal party insiders at Labour HQ had collaborated to sabotage Corbyn-led Labour’s electoral campaigns, using groundless accusations of antisemitism as a character-assassination tactic.

Veteran British journalist George Monbiot (Guardian, 7/26/19) warned in July 2019 that massive neoliberal tax cuts to the billionaire class, and the resulting, oligarch- funded far-right nationalism, had led to the election of “killer clowns” in countries like the US, Britain, Hungary, India and Brazil. These clowns, he argued, have no commitment to democratic process, and serve as nothing more than media distractions to draw attention away from a business class that is robbing the people blind.

As Trump instructs Americans to inject Clorox to fight coronavirus, and as Jair Bolsonaro’s new zombie-like Health minister cancels an order of 15,000 ventilators from China, the concrete result of these clowns’ necropolitics is more evident than ever. And the media hand-wringing over these killer clowns seems to serve no other purpose than further distraction.

There would be more trust in establishment media if outlets showed any responsibility for their actions. But, like public health in times of pandemic, this does not seem like something that can be trusted to the invisible hand of the market.